Is this the laziest title screen ever?

Today I was in the mood to play a janky Jaleco beat 'em up, so I decided to fire up the SNES online app because the complete Rival Turf trilogy is available there.

I gave the first installment a try, but quit out of boredom after one level. Man, what a rubbish game. I’d rather play Renegade on the Commodore 64!

On to part two: Brawl Brothers. This game is a massive improvement over Rival Turf, but it makes a really lousy first impression. Just take a look at this sad excuse for a title screen! 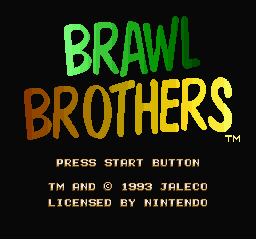 Oof. Shocking really, that anyone thought this was acceptable.

Here’s the Japanese version, for comparison. Rather basic, yes, but at least it doesn’t look like they let a toddler have a go at MS Paint.

Anyway, is the Brawl Brothers title screen the laziest title screen ever, or are there even worse ones out there?

Weird how they rebranded stuff like that, meaning sequels didn’t follow on. they they had to knock up z-grade logos.

Just kind of old school though I guess. Most mid-80s games had basic stuff like that, arcade games would only show the title when you put a coin in sometimes, while they looped the attract mode.

It wasn’t until Super Mario bros and Akumajou Dracula that interesting ideas started being used, like working the attract mode into the title screen.

Yeah, those early title screens were quite basic. Often nothing more than a black background with the title of the game in big, bright letters.

Still, I think most of those look more appealing than that Brawl Brothers title screen. It’s the combination of hideous font and ugly shading that makes that one a winner. Or loser, depending how you look at it

Yeah I can’t think of any other ‘lazy’ ones per-se.

I did find the Breath of the Wild non-title screen to be a bit lame?

Or the super sloppy ‘Street Fighter Alpha’ logos (and thus title screens) which replaced the original Street Fighter Zero Logos. The Alpha 3 logo looks like it was done by the interns in 30 minutes.

I agree there. The Alpha logo looks ass. The original zero logo is vastly superior and a cooler name.