So Apple Arcade seems to have delivered on its promise of great games with no ads.

What are people playing?

Lots to dig in on during the free month!

PSA: if you cancel it ends immediately not at the end of the month. So, set a reminder to cancel in 29 days or so.

It does feel like a trip down memory lane to an App Store before the race to the bottom and in-app purchases. I’ve tried about a dozen games since launch. The problem is while there was nothing wrong with most of the dozen games I played, it did feel like I wasn’t really seeing anything new because I was an avid player back when the ecosystem wasn’t ruined. Rayman Mini, for instance, doesn’t really hold much value when Rayman Jungle Run existed years ago, and Super Mario Run exists right now. Sega Hardlight’s Chu Chu Rocket Universe was solid but not really any better than the game Sega developed years ago for iPad.

I’ve spent the most time with:

Frogger: I was surprised to find this was developed by Q-Games, Konami certainly picks its development partners wisely (Hexadrive did Bomberman R). This one has an emphasis on physics due to its toybox-theme, though it is visually drab. The 30fps cap, presumably to save battery, makes it feel as sluggish as it plays.

Sayonara Wild Hearts: Another well executed game from Simogo. It’s basically an action game with a pop album theme, and while it’s certainly very slick it’s also disappointingly derivative when compared with the developer’s pedigree. There isn’t really anything in here, mechanically, that I haven’t seen in other games, and the mechanics are rather shallow anyway. It’s a high score-chasing music game that doesn’t quite offer enough to make me want to replay its levels for gold ranks.

Shinsekai: Capcom have done well making a side-scrolling exploratory title where you’ve got to fight against the dangers of deep-sea traversal. The physics are slow but satisfying to overcome (you can use your suit’s thrusters to increase your manoeuvrability at the cost of oxygen) and it’s pretty relaxing when there aren’t creatures trying to kill you! It’s the perfect setup for touch controls as well, given the slower, less responsive underwater movement. Your left thumb moves your character and your right thumb can aim harpoons, smash the ground (with a downward swipe) or get you jumping (upward swipe). You can tell the team designed this one from the ground-up for phones.

Hot Lava: New game from Klei, who are probably best known for Don’t Starve and Mark of the Ninja. I had a lot of fun with it, but it also reminded me how it would be perfect for the Switch. Basically, it’s a first person platformer where you run through sandbox environments from checkpoint to checkpoint, trying not to touch the floor (the floor is lava). Because of the fast paced nature of the game and the need to look in front and below you while jumping, it’s only really playable with gyro controls, but using your left thumb to move is annoying finicky.

Super Impossible Road: Basically a more bloated version of the excellent original game. But the online multiplayer races are good fun. I think this released first on PS4 a few years ago.

I also tried Grindstone (new puzzler from Capybara which is solid), Shantae 5 (honestly thought this was very dull) and Rayman Mini along with Sonic Racing and ChuChu Rocket.

visually drab. The 30fps cap, presumably to save battery, makes it feel as sluggish as it plays.

I thought Frogger had that raytraced Pixar vibe going for it. I like it. Does feel sluggish with touch screen but nice and nimble on game controller. Nimble enough considering 30fps.

Sneaky Sasquatch seems to be a response to the Untitled Goose Game. No bad thing. It’s quite fun. Plays well with controller though there are a few touch bits that gain a Slightly out-of-place virtual finger (pointer) when using a controller.

Are these games playable with a controller? I have an apple tv. Maybe I’ll check out the service if I can play it like a console.

That’s how I want to play them but I’ve been using my iPhone (6s old school) until then.

It’s a shame they didn’t support Switch Pro Controllers. Having sold both my PS4 and Xbox One I don’t have any compatible Bluetooth controllers - the XBO controller I have left is an early model without Bluetooth. Oh well!

I’m puzzled by that as I’ve been able to use my Switch Pro Controller on my Mojave Mac. I don’t know if that’s changed in Catalina.

But I feel Apple must be actively blocking Nintendo controllers on iOS. I’ve tried Wii Pro, Wii U Pro and Switch Pro Controllers.

I’m running the GM of tvOS and Apple Arcade is now live. About to dive in with my MFi controller.

Even when downloading multiple games in the background Frogger played well despite some expected skipped frames and slowdown.

Cloud saves worked well in Sasquatch. In Frogger it only checks after the intro, so you have to choose to resume your existing save - slightly awkward.

Good times ahead if you’ve got a game controller.

Good times ahead if you’ve got a game controller. 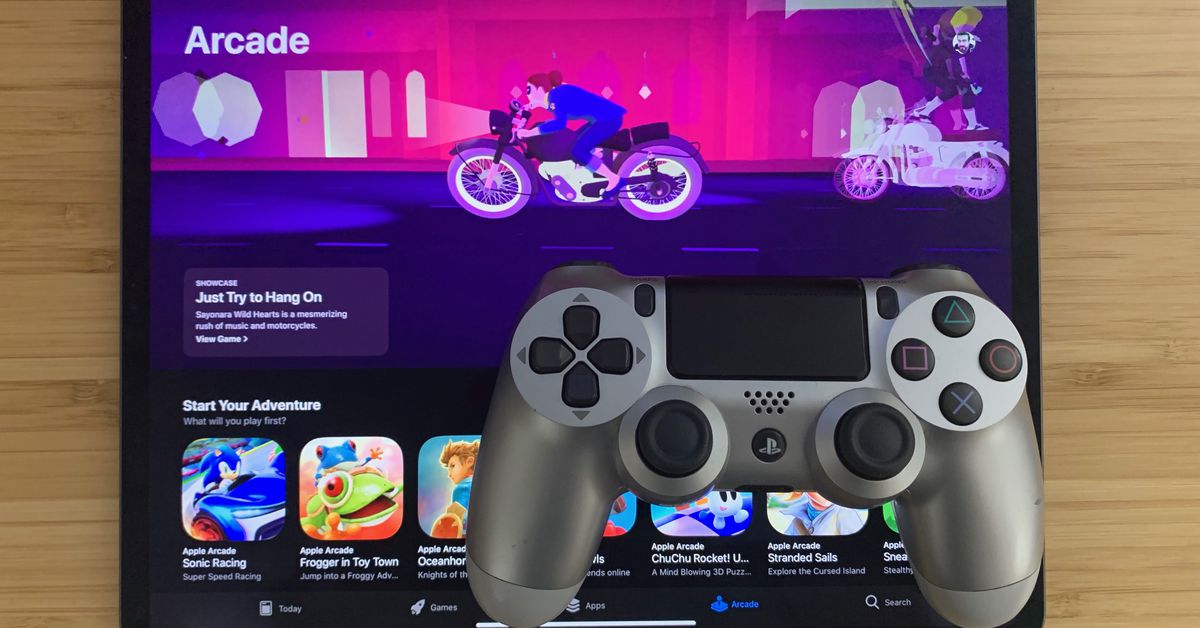 How to pair your PS4 controller with your Apple devices

Looks like we’ll be able to use a DS4

Yes, DS4 or Xbox One controllers. I don’t have either but may need to buy!

A good site that covers iOS/tvOS games that work with controllers: https://controller.wtf

Unlocked a couple of bonus levels and they both run abysmally on my Apple TV. One has bugs in the countdown timer and graphics glitches in the 3D background. The other has so many obects that it suffers from huge slowdown, around 10-15fps down from about 30fps. Really not acceptable on devices this powerful. Silver lining: I found a Moai in that level.

Been playing a bunch of Card of Darkness. It’s a pretty tough card game where you make your way through dungeons and has art by the guy who did Adventure Time. It’s fun and has been giving me Solitairica vibes and most importantly for a phone game it doesn’t cut out my music/podcasts when I boot it up (What the Golf? and Grindstone but cut my audio).

I tried a few more games. Bleak Sword is a pretty good combat action game with what feels like swipe controls that work best with touch. But it feels like there isn’t enough enemy variety to justify ten levels per world. The only new mechanic that’s been introduced since the start is horse-back combat and it only makes an appearance in the third world.

I also rather liked Speed Demons, though it feels like I’ve played the whole game having perfected the prologue races and a few chapter 1 levels.

I tried a few more games. Bleak Sword is a pretty good combat action game with what feels like swipe controls that work best with touch. But it feels like there isn’t enough enemy variety to justify ten levels per world. The only new mechanic that’s been introduced since the start is horse-back combat and it only makes an appearance in the third world.

I didn’t even make it that far.

Ustwo game is nice but really a tech demo with a story added in.

So much average crap on here. A few good games. No killer apps so far.

And my Frogger save is apparently corrupted.

@gingerbeardman The bug is fixed and a patch is going through Apple now, very soon it will be safe again to play! Very sorry about that.
harborline_765 October 8, 2019, 7:30pm #18

I’m going to try Frogger again, I initially downloaded it alongside too many other games but it seems like a fun romp when played in short bursts. Still not a huge fan of the Pixar-esque visuals if only because they’ve capped the framerate at 30 which just feels weird for a game of this ilk.

I’ve been playing more Sayonara Wild Hearts, the game has slowly won me over despite a lot of its ideas being less original and more derivative when compared to Simogo’s previous games. The creativity here is in the presentation which is really quite exhilarating.

Today is probably the first time since launch that I’ve been excited about Apple Arcade again. Three big games from Japanese developers released, two of which are pretty momentous.

First there’s Fantasian, Sakaguchi’s latest RPG. I haven’t played much of it so far but the battle system is interesting (you can curve attacks around enemies, Opoona style) and the user interface is one of the best I’ve used.

Then they dropped Clap Handz Golf out of nowhere! Holy crap, I love Everybody’s Golf/Hot Shots Golf/Minna no Golf on PlayStation but thought Sony dropped the ball with the PS4 game and its heavy reliance on pay to win microtransactions. American-run PlayStation probably killed off the franchise along with Japan Studio since its long-running developer, Clap Handz, has gone to Apple for this new game. And from what I’ve played so far it’s very good indeed, like the sort of game they’d have made for a new PlayStation handheld if it existed.

Lastly, Taiko no Tatsujin just hit the service. I get the impression these three games are mostly a play for the Japanese market, but it’s a wise one indeed.

Edit: A new PlatinumGames title released today too, definitely not a coincidence that 4 Japanese games released on the same day.

Their play for the Japanese market got this East Coast US gamer interested again.