With Hamster having released a sizeable catalogue of arcade ports from the repertoire of various publishers of time past, I thought it could be a good idea to discuss the AA games we’re playing right now, or any hidden gems that went unnoticed amidst the modern age’s sea of releases. What makes these games timeless? Do share your best picks - here’s what’s available right now:

I got into this sort of 80s high speed, high stakes top-down racer after playing an un-credited clone of Data East’s Bump 'n Jump at Amusement Cue in Nara. Konami’s game has a refreshingly different air about it, though.

Your goal is to reach the top of the map without running out of fuel - you lose fuel for crashing and for racing in high gear. There’s no dedicated jump mechanic here, what you see must be avoided at all costs, and this game demands your concentration and discipline if you want to stand a chance at succeeding.

Basically, scraping traffic on the roads won’t lead to you blowing up or forfeiting time unless you hit the sides of the course, so you’re given a chance to correct your mistakes. It’s when your car starts skidding off to the side after an accident that you need to be disciplined and regain control. The physics change here, so avoiding your natural instinct to counter the direction you’re being flung toward is the name of the game. Depending on the road’s width and shape it’s often better to either lift off the accelerator, or turn in the direction you’re moving, rather than against it.

That’s the thing, because the road formations and traffic vary, the game rarely feels predictable to the point where you may even have to bump into something to progress, having to learn to master these unpredictable moments is a large part of the game’s lasting appeal.

Crazy Climber 2 is really good, and what I really cherish about Arcade Archives. While Hamster does (rightly) focus on widely anticipated hits from the past, it’s even more exciting to see types of games that have been lost to time. Other than Vitei/Nintendo’s more technical Rock ‘n Roll Climber, there really hasn’t been much else like this out there since 1988.

For those unfamiliar, it’s a twin stick setup where each stick controls your left and right arms and legs respectively, and you can sidle and cling on to ledges to sustain falling objects from above. This is all easier said than done, of course, but entirely part of the game’s charm. Even if some of the hazards and level layouts really test your patience…

So far I’ve gotten as far as stage 3 on caravan mode - though I’m still losing plenty of lives on stage 2. You want to keep your ‘step point’ (how many points you get for climbing each window frame) as high as possible and falling off the towers resets it back at least one level. On normal mode I can’t clear stage 4, the gorilla waits at the top of the tower, jeopardising any chances of grabbing on to the helicopter without good timing.

Gotch Technology Corp did the conversion for this one, if anyone’s interested.

Good idea for a thread, didn’t realize it was here.

I’ll recommend Donkey Kong and VS Super Mario Bros. DK includes the often missing cement factory level. Never thought we’d ever see this game have an official modern release. And VS SMB is just kind of crazy as a remix of a classic.

I need to buy so many of these …

Wow, I didn’t realise the original arcade Donkey Kong has practically never been rereleased outside of its appearance in DK 64 (which was my first exposure to playing it). It didn’t even see appearance on Wii Virtual Console arcade!

This is news to me, but apparently Nintendo did back-port the cement level into the NES version of the game and distributed it with some anniversary Wii consoles, and on 3DS Virtual Console (where Nintendo has wrongly categorised it as ‘Arcade’ instead of ‘NES’).

Never looked into Vs Super Mario Bros, other than seeing someone furiously play it at an arcade in Japan one time. Do you think it’s worth picking up now when Arika’s Super Mario 35 is on the way, or waiting for that game to be delisted at the end of March?

I would think Mario 35 would probably scratch much the same itch, in a more modern way, and for free if you already sub to NSO. VS SMB is worth checking out though. It gives you dip switches to adjust difficulty through various settings (like needing 250 coins for a 1UP) and it just screws with your mind because it’s a remix of the original. It’s an official re-thinking of a classic, from the game’s creators, and is contemporary with the era - not trying to be “retro” like Mario 35. And much like DK, it’s never before been released by Nintendo. Worth supporting and owning.

EDIT: We could have some hi score battles if a few people bought it.

Alright, I’m down. Going to buy it tonight!

At least my repro cart has the dip switches. It’s a minute since I’ve played the AA release but I think it does as well. Might want to watch a video review. Also, the color palate is the more vibrant “improved” RGB palate, which is interesting. Just a cool piece of history.

I have a repro cart of SMB VS with dip-switches too. I’ve never seen another cart that had them - it’s very unique in that regard.

My cart just has it programmed in - not physical switches. Do yours have real switches too flip?

The label describes the dip switch settings and the cart works on real NES hardware. I’m not that into repro carts, but this one is kind of novel and cool.

I’m rubbish at Vs Super Mario Bros - easy to think you’re good just because you could get to 8-4 all those years ago, and SMB2/Lost Levels seemed doable…

Is it worth bothering with the warp zones now that the need to go for a high score is more pronounced? Some of the caravan mode high scores are boggling my mind…

Jaleco’s Earth Defense Force lands on AA this week, is anyone familiar with it? The SNES conversion is also on Switch Online, but I haven’t played it yet.

There’s so much and I want see if I can curate a nice collection.

Of course, I’m not a big figthing game guy, but if I were, Samurai Shodown games would need to be there too, as would Art of Fighting and Fatal Fury. I am also not familiar with many of the games available - it’s turned into an incredible lineup of titles. So there are some gems to discover here.

Saw this was on sale, at least it was a few days ago. Thought it might be a fun button masher for me and my kids. Think so? Been ages since I played this one…

It’s a fun wresting game.Be prepared to accept every character has the same moveset with slight differences in execution and the computer being a cheap, cheating bitch.

Earth Defense Force is out today, and while Super EDF is on the SNES online subscription, even after just a few plays I would consider the arcade original a stronger game. Super EDF has more stage and weapons and most will probably like the soundtrack over the scratchy synths of the arcade version, but Earth Defense Force (without the super) has more interesting stages and enemy. Like, in the SNES version, the first stage is a snoozefest except those fat round enemies that hug corner of the screen and hard to hit and even harder to kill with your piss-weak weapons, while the more unrelenting onslaught of enemies on arcade keeps you on your ties and yet feel somehow more balanced. Interesting setpieces like the battleship on stage 2 are lost in the transition to SNES, and many bosses lose all of their notable attack patterns and challenge (like the stage 1 midboss, who no longer fires laser from his rail on SNES, or the stage 2 boss whose flames would split when you shoot then on arcade, while on SNES he has a very simple and easy to cheese pattern… etc). The graphics are obviously better too.

I need to check out Last Blade, wasn’t SWERY a designer and writer on one them? I bought Garou Mark of the Wolves a year ago and only now have I gotten round to playing it - so good. But hard.

Cheers for the impressions on EDF, really appreciate it. Going to give it a go. As for Jaleco games, what did you think of the three Ikari no Yousai games and Avenging Spirit?

Finished Crazy Climber 2’s sixth stage today, while I must have used a dozen credits to retry the level it was so satisfying beating that level, which throws everything it can at you to literally dislodge you from that skyscraper.

Amazing game - hoping I can one day get past stage three on one credit, and do a perfect run for Caravan Mode.

I only played Operation Logic Bomb out of those and I thought it was typical Jaleco mediocrity with uninteresting level design (complete with the amazing mechanic of having enemies mostly spawn right in your face, something I always hate), uninteresting weapons, uninteresting enemies and the extra jank of the game having plenty of unskipabble cutscenes that can easily be trigged by accident. The graphics are pretty good I guess.

Here’s a few fun videos of Crazy Climber 2 in action:

Made it to the top ten on the leaderboards for both High Score and Caravan Modes this evening!

I bought Earth Defense Force/EDF, haven’t played it yet but I noticed something off from the start, there’s one less typeface and the icons have messy pixellated edges to them.

I think Hamster might have rewritten the front-end to the games, since other recent releases, like Gemini Wing, exhibit the same differences. The intellectual property notices seem to hint that they are also using the Vulkan API for rendering, not sure what it was before (OpenGL?) 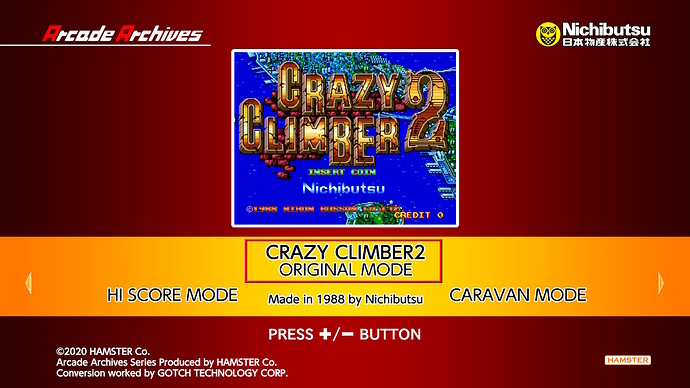 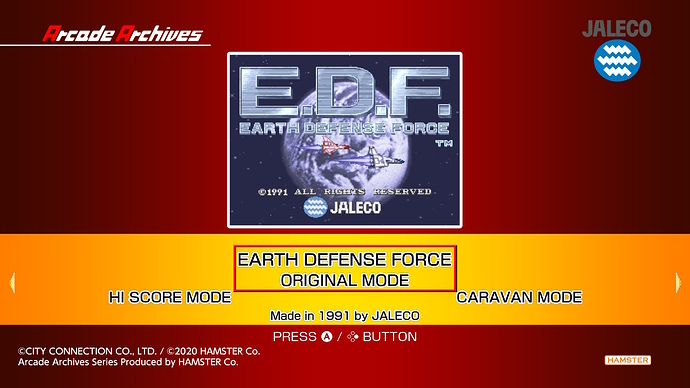 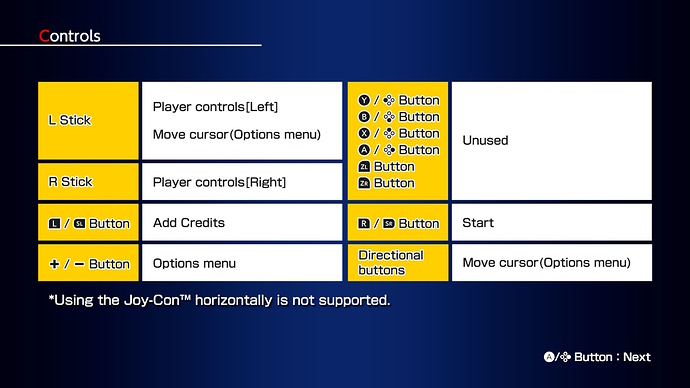 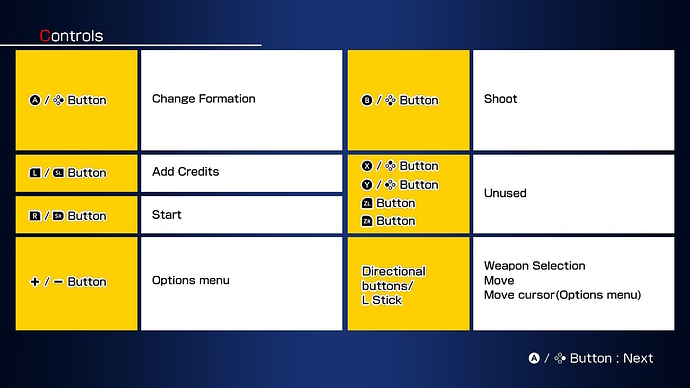 Notice how the button prompts appear messier in the new versions.