What is going on with Wonder Boy?

Asked about this in a thread dedicated to Wonder Boy on reset a few days ago and didn’t get a response. I doubt anyone would have more then speculation, but it’s the stuff relating to having to omit it’s existence from that book release that is the most interesting to me. Since as pointed out you don’t need approval to write about something in that way, it’s more that it could be such a sore subject that it would kill a working relationship if pressed. But who knows.

Does it have any unlicensed game in it? Like Codemaster games (Dizzy, Micro Machines)

If not, then it’s a book that can only contain SEGA licences, hence the lack of the properties taken away from SEGA like Ecco and Wonder Boy.

I remember when Monster Boy got it’s name. It was previously made to be similar to Wonder Boy III but with a different IP. Then the studio partnered with LAT Corporation (who bought the IP when Westone went under) and they were able to use the Wonder Boy characters, but not the name, property of SEGA. Which is why the game is so similar, yet with a different name.

Now there must be some big contention between LAT and SEGA, each holding a part of the IP and neither wanting to let it go. SEGA may not be able to publish the old games any more, but can still use the name to make new games. LAT can do whatever with the old games, but can’t use the name for a modern follow-up.

It features third party games (inc Taito, Irem, Capcom), Disney games… and the Wonder Boy Tectoy ROM hacks using the Monica license! The book isn’t exclusively about Sega licenses so for Sega of Japan to veto Wonder Boy’s mere mention in the book (one with a really niche audience anyway) must mean something pretty acrimonious behind the scenes.

As far as I know, those weren’t real third party games. The IP was licensed but the games were re-programmed and published by SEGA. Only two games were developed by a third party, Rygar and Solomon’s Key, both only in Japan and both by Salio/Tecmo. Are they in the book? Then again, they were published by SEGA, who gave them a silver box (as opposed to the golden box Mark III games from SEGA had), so they very well may be in.

Which is why I asked specifically about prominent unlicensed games from a European publisher: Codemaster didn’t have any license from SEGA, they made their own mapper and printed their own cartridges and boxes, giving zero money to SEGA.

Sega wouldn’t like my complete except one (the expensive Game Gear MW2!) 8-bit WB/MW set then I guess… 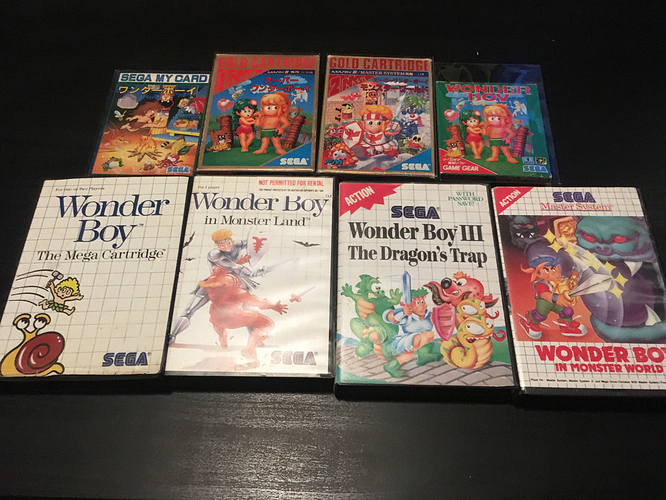 Beautiful! What are all the Japanese titles? I’m not familiar with them.

Edit: actually technically the PC Engine games are 8-bit too, and I have all those too… and Adventure Island Famicom…

Gotcha. Are you in Europe? For some reason on the Game Gear, they called it Revenge of Drancon in NA instead of Wonder Boy.

I’m in Australia, but it’s the Japanese edition, hence the same cover as the Mark III version.

The Codies games aren’t in but Solomon’s Key is as is New Zealand Story, a port Sega definitely didn’t do.

Most of those games were situations like that, years later Euro ports of Famicom or 8-bit computer games for the post-Mega Drive budget audience who had grabbed a Master System II.

But yeah there were third party games, but not many by Japanese devs/pubs themselves.

To be fair, in many cases Sega didn’t port them either, they got the licences but farmed them out. Double Dragon was done by Arc. R-Type was done by Compile. Sega themselves ported some stuff, like Captain Silver, Spy vs Spy themselves.

Taito did do Final Bubble Bobble Mark III though I believe! One of the few Mark III games I’m missing