Yes that would be cool. I don’t know if one unfortunately.

Can you use the USB Saturn controllers?

Raph’s adapters are under 1ms of lag each.

By default the adapters have 6ms of lag, 3ms is only possible if you are have one of the more recent adapters and are using it with a PC and Raphnet’s configuration tool.

Was curious about this and tom is right:

There are two variables:

The total latency is therefore 1ms + [configured poll interval]. This results in a minimum total latency of 3ms , and of 6ms by default.

And this is only for the newer advxArch adapters and hitting that minimum will certainly need to be on a PC with fast USB polling. The Switch supposedly has slow USB polling, such that a wireless Pro controller actually has faster response time than the Pro over USB. The fastest Switch input method is actually portable mode with connected joycons!

edit: Double-checked the MMX:LC input lag tests and this is incorrect. Docked Switch is the fastest, followed by portable Switch with Pro Controller.

Anyway I’m sure this setup works well, I have a couple of Raphnet adapters myself, but it must be somewhat higher controller lag on Switch.

such that a wireless Pro controller actually has faster response time than the Pro over USB.

That is both amusing and infuriating. Seeing as how I had bought a longer cable just to keep my pro controller attached.

The GC-N64 adapter is 5ms of input delay as noted here:

It’s a great article to read as well.

5ms + whatever the usb adapter adds and I bet it’s still under 1 frame of lag (16ms) which is totally playable and unnoticable for 99% of the population.

Infact most arcade sticks have more input delay then this adapter setup.

Going by the tests here, going from Switch wireless to USB adds 13ms lag (18ms total with the adapter?). Not a crazy amount but still worth noting. 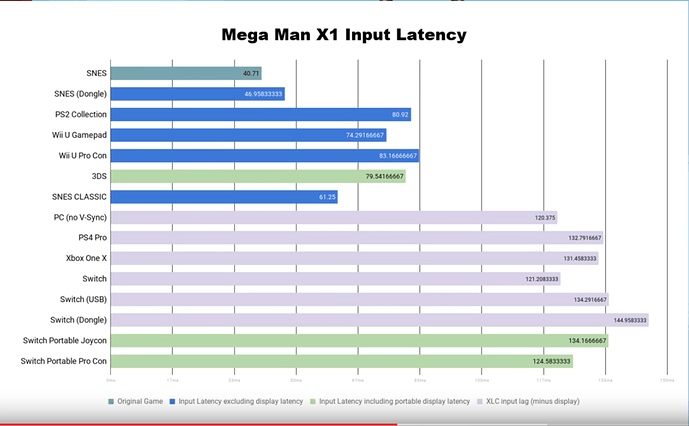 Thought I read under 1 ms. I guess it was under 1 frame? My bad for the confusion everyone! Thanks for the correction

This is insane. I’ll definitely check it out. This also means it’s possible to play smash ultimate using an n64 controller…

I used a wavebird for Zelda when the firmware was first updated to support the Wii U GC adapter. Only for a couple of minutes as the button arrangement was weird and it din’t have enough buttons. My SNES to GCN adapter didn’t work.

Sticking to joycons for modern games, separate hands is just too good.

I agree with this. I’m trying to train my body to enjoy playing Switch games with my arms rested relaxed at my sides to help mitigate the inevitable bad posture associated with gaming. Easier said than done.

I like the Joycons, but don’t love them. The short throw of the analogue sticks in particular make controlling something like Rocket League nearly impossible for me.

They just lack the nuance (or perhaps have too much nuance?) compared to normal sized analogue sticks we’ve grown accustomed to over the years starting with the N64. I cannot, for the life of me, get a feel for that game on the Switch even after tinkering with the sensitivity options.

It bums me out because I really do want to play that version more often when traveling. Other games feel fine with them though.

I absolutely love the Joycons, I rarely put them in the holder either, the split controller design is too comfortable (I loved it on Wii too). The smaller thumbsticks have actually been really comfortable for me, I’ve found I can hold the run button (B) in Zelda with the tip of my thumb, while still being able to move the right thumbstick with my thumb, meaning no more claw grip!

I’m a new Switch owner, so I’m still grappling with the asymmetrical sticks and the lack of a real D-pad. I like the weight and feel of the system, though. (Sorry if a bit OT.)

Semi-related, I have an NES-style 8bitdo controller that I ripped apart and threw in an old ASCII Saturn stick for shits. I plan on using that with my Switch. I’ll post some pics at some point.

A little OT but I’ll join in on the joycon discussion.

The joycons are a marginal step up from what the Vita had for “full control experience” on a portable system but the analog sticks are still awful. I’d honestly prefer two 3DS slidepads to the awful analogs on those things.

The lack of d-pad is an ongoing problem despite reshelling mine to have a d-pad. I’m looking forward to the revised HORI left dpad joycon for that.

Can’t imagine ever wanting to use them for connected-to-TV play.

I have no issues with precision, they’re smaller but have the same number of levels of nuance. And the games that need massive precision use motion aiming anyway, so best of both worlds at once

I never play handheld really, I’ve disliked handhelds since the original Game Boy, shoulder buttons on a big fat thing just don’t work for me. When travelling I play tabletop.

However I need that 8bitdo DIY controller for Fighting games. Buttons dpad is fine (almost better in some ways?) for Wonder Boy/Axiom Verge/Tiny Barbarian etc, but not games that roll between directions.

I don’t mind the joycons on the go, they got the job done for most games, but I always prefer the Pro controller at home. For my weapon choice and playstyle in Splatoon the joycons are damn terrible. Besides the lesser precision of the small sticks, I learned I absolutely need the left hand to stabilize the controller while I simultaneously stick aim, gyro aim and rapid press the right shoulder trigger. After hours of trying I could only do a slow, sloppy and very uncomfortable version of this holding two separate small controllers.

A bit over a year ago, I picked up a Nintendo Switch and a copy of Mario Odyssey largely due to the addition of support for the GameCube USB adapter for Wii U in firmware 4.0. I have been using a GameCube controller to play as many Switch games as it makes sense to, and have since picked up the HORI Battle Pad and 8bitDo Gbros adapter. Since the GC pad is awesome and I think it’s an interesting topic, here’s my impressions, tips, and anything else I think is relevant to playing with a GC pad o…