Going likely buy an LG OLED in the next few months. Does the lack of genuine nearest neighbor scaling on 4k sets make Switch look bad?

I hear that Switch looks terrible on LG’s OLEDs. Is it just people being dramatic, or is it a genuine drop in quality from a 1080p set? I know you can run it at 720p, but I’d probably just set it to 1080p and call it a day.

How bad does that look? I’m currently playing on 1080p where Switch looks fantastic. It’s the one aspect of a new TV that I’m dreading to be honest. How blurry is it really? anyone have some off screen close up shots?

I just picked up an LG C1 last month and I have been playing a decent amount of Switch PS3 and 360 on it. I don’t think it is all too bad but it is never going to be as good as on a 1080p display. You’ll probably want to turn your sharpening up a little bit to help smooth things out. I use an Mclassic scaler and it definitely helps IF you can get it to do 1440p which is a pain in the ass cause TV manufacturers don’t like to put 2560x1440 @ 60 in their EDIDs even when the resolution works just fine, I had to get a programable EDID emulator called the Gofanco Prophecy to get the Mclassic to actually do 1440p but when I did, the results, while improvements were subtle, were very nice.

I think having the Switch output at 1080p or 720p is just a matter of preference overall. Docked most games run at some weird dynamic res anyways that’s never quite 1080 or even 720p most of the time. I know you can supposedly force games playing docked into the handheld profile with homebrew to try to get a more consistent, closer to output res, rendering res in your games but haven’t tried it.

Now the real problem is not resolution and scaling for me, it is motion of games on these systems that routinely fall 30fps and sometimes lower. OLED shows judder in low framerate content way more noticeably. I was suprised when I went from games like Smash and Mario Kart 8 Deluxe that looked better than I had ever seen them easily to Animal Crossing and Brilliant Diamond where moving side to side showed a pretty unsatisfying amount of judder I wasn’t expecting coming from the more smeary motion on LCD. So your options there are to play until your eyes get used to it, or turn off game mode and use some real conservative motion interpolation to make it look better without too much artifacting / soap opera effect but on the C1 brings you to like 80ms lag. I really wish there was a way to turn on the dejudder option in game mode.

Now the real problem is not resolution and scaling for me, it is motion of games on these systems that routinely fall 30fps and sometimes lower. OLED shows judder in low framerate content way more noticeably.

Worse than CRT? I have no problem with 30fps on my PVM.

Edit: I know it’s not the answer you want, just giving my experience.

Damn. Non-native 1080p really looks that bad huh? What a bummer. I really think it would all be fine with a very simple nearest neighbor solution.

Somehow feels like it. I haven’t played Switch games on CRT but I never felt like I noticed it that bad on PS2 games on my CRT TV that get to low framerates or like in Ocarina of Time. But lots of people online say they get used to it

As long as the framerate is constant, even 30fps isn’t really bad. It’s when it starts fluctuating below that that it becomes noticeable.

I found that my PS3 looks distractingly sharp, and I read somewhere that it was a quirk of the system, which was notorious for it’s lack of antialiasing. The Switch kind of has a similar look. It never occured to me that it could have been the scaling from 1080p that could be the culprit.

Haven’t noticed anything like that. The picture is super crisp for the Switch. Granted my TV isn’t OLED and I’m not sure what scaling method it uses in game mode.

Not the answer you’re looking for but anecdotally I’ve been playing all modern games on a 1440p monitor for more than a year. 1080p is nearly indistinguishable from native res in game. At some point you have plenty of pixels to play with for scaling and it isnt a big deal any more. It isnt at all like scaling a low res to another low res.

Been wanting to ask this as well @Peltz ! I am also getting a C1 in Feb or early March. I too have a Switch and PS3 and am a little worried about how they’ll look. It seems it mainly 30 fps stuff that will look/feel bad. I figure I’ll just get used to it. It’s a minority of the games I’ll play anyway. I’m feel like I’m likely to play far less Switch and far more PS5 going forward.

I imagine the next Nintendo hardware will be 4k compatible and be BC as well, so by then, there will be a solution for proper scaling. The framebuffer will be 1080p (I can’t picture the games getting remastered or patched) but a built in hardware scaler for simple nearest neighbor should solve the issue if I had to guess. Similar to how Wii games scaled on Wii U (but hopefully cleaner). And I’m sure next gen switch games will use more sophisticated rendering techniques to get to 4k (checkerboard and AI I’m sure).

So at worst, this is a temporary issue. I just wish they patched Switch hardware today to support 4k scaling for these games.

I have a Japanese exclusive 4K LG with all the bells and whistles such as HDR 10, Dolby Atmos vision and sound, black frame insertion, 120Htz at 4K and so on. But it isn’t not OLED, it’s an IPS panel with nano pixel technology and I can honestly say that my Xbox 360 and analogue consoles which all output in 720p look very good on this screen. My PS4 is outputting at 1080p and that looks great too. Of course the series X in 4K just beems quality.
Now, I’m guessing an OLED is only going to be better in terms of black level (IPS is good for blacks though) so it should look just as good.

No idea on OLED, but I’ve run Switch on a 4K LCD panel its entire life and it looks fine.

Scaling from 1080p to 4K is fine. They don’t do integer but some kind of interpolation. At absolute worst it will technically make it a bit blurrier on a 2x2 pixel level, but that would only be visible on a massive screen or up very close. There’s not less detail than at 1080, just sightly blurred scaling from 1080-4K.

Yeah I believe 30fps stuff can be an issue on OLED. But that’s not limited to Switch.

Was playing today and thought about this thread. Here are some pictures with the Mclassic + C1. Let me know what you guys think. 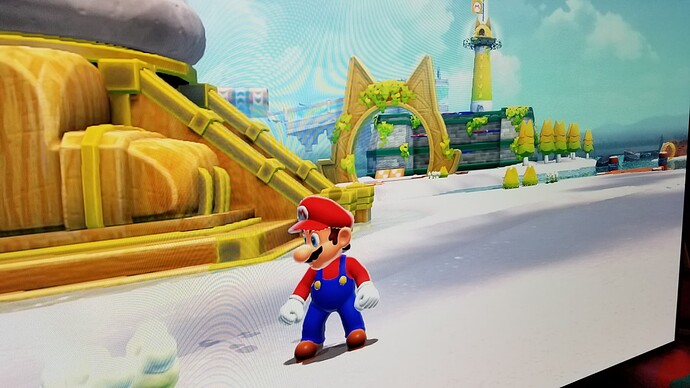 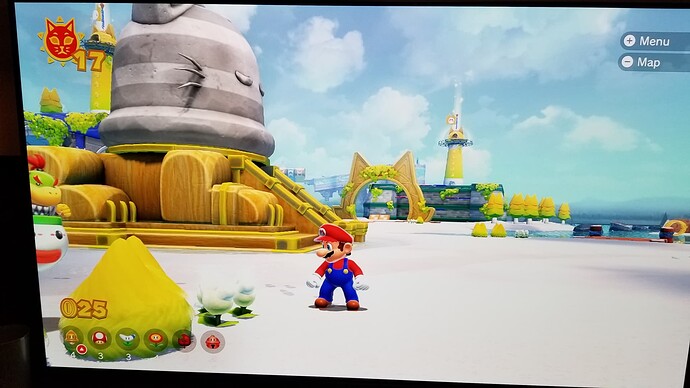 Got a comparison without the mclassic?

The RetroTink 5X’s new experimental 720p processing looks interesting for the Switch. I know most Switch games hover around 720p while docked (and you can explicitly set the Switch to that resolution). Really making me consider getting one now (for the PS3 as well)

In my experience most switch games docked are 1080p or somewhere between that and 720p and look a lot better output at 1080p. Even when running at lower res for rendering usually UI/text/etc is at 1080p.

Depends what you play, a handful of games look better at 720p but its not the norm. Most recent game I played like this was AI: The Somnium Files which doesn’t seem to improve anything vs handheld mode.

so i bought a 42 or so inch LG 4K OLED last black friday & absolutely love it, but i’ve only played so much switch on it…what i did though, didn’t seem so much worse than my last older set? like, it looks how the switch does docked…not bad, but i get why folks emulate/upscale haha

Didn’t take any at the time but here are a few! 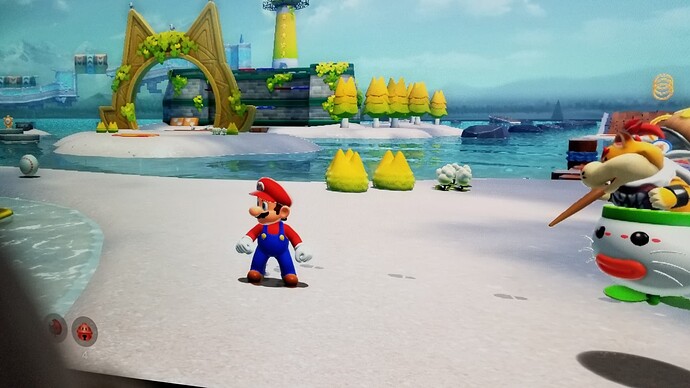 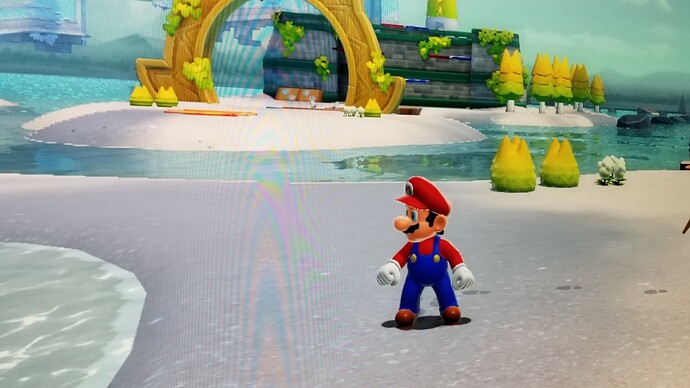 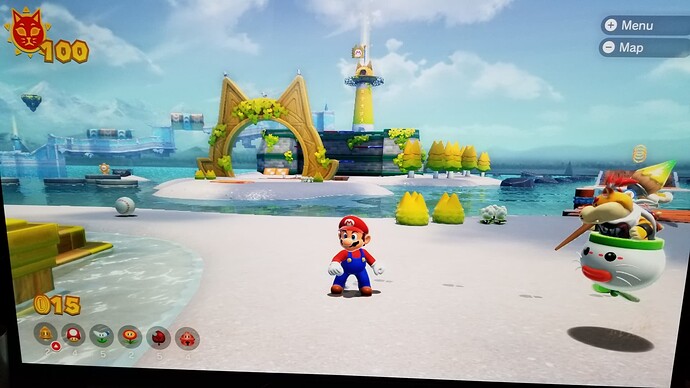