Anybody else here play Hanafuda Koi-Koi? 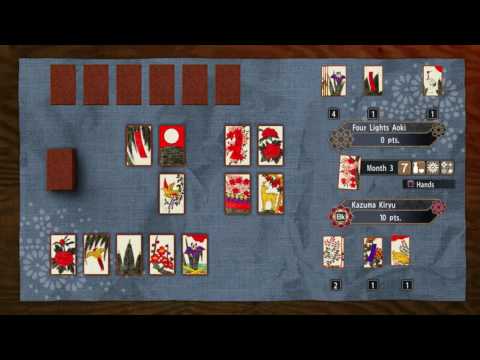 It’s been a staple for me since playing 42 All Time Classics (Clubhouse Games) on the original Nintendo DS. And, of course, Nintendo got their start making physical cards.

So, much like my golf challenge, I’m trying to play as many Hanafuda Koi-Koi games as possible. I find it fascinating that a “traditional” game can be interpreted in so many different ways, with varying levels of success/failure.

It’s been a staple for me since playing 42 All Time Classics (Clubhouse Games) on the original Nintendo DS.

I played a lot of this but don’t remember the Hanafuda, I’ll have to fire it up again!

One recent version I “uncovered” was included on a cover mounted floppy disk on MSX-FAN magazine from 1994/06. This is a free game created by a reader and distributed through the magazine. Old school. 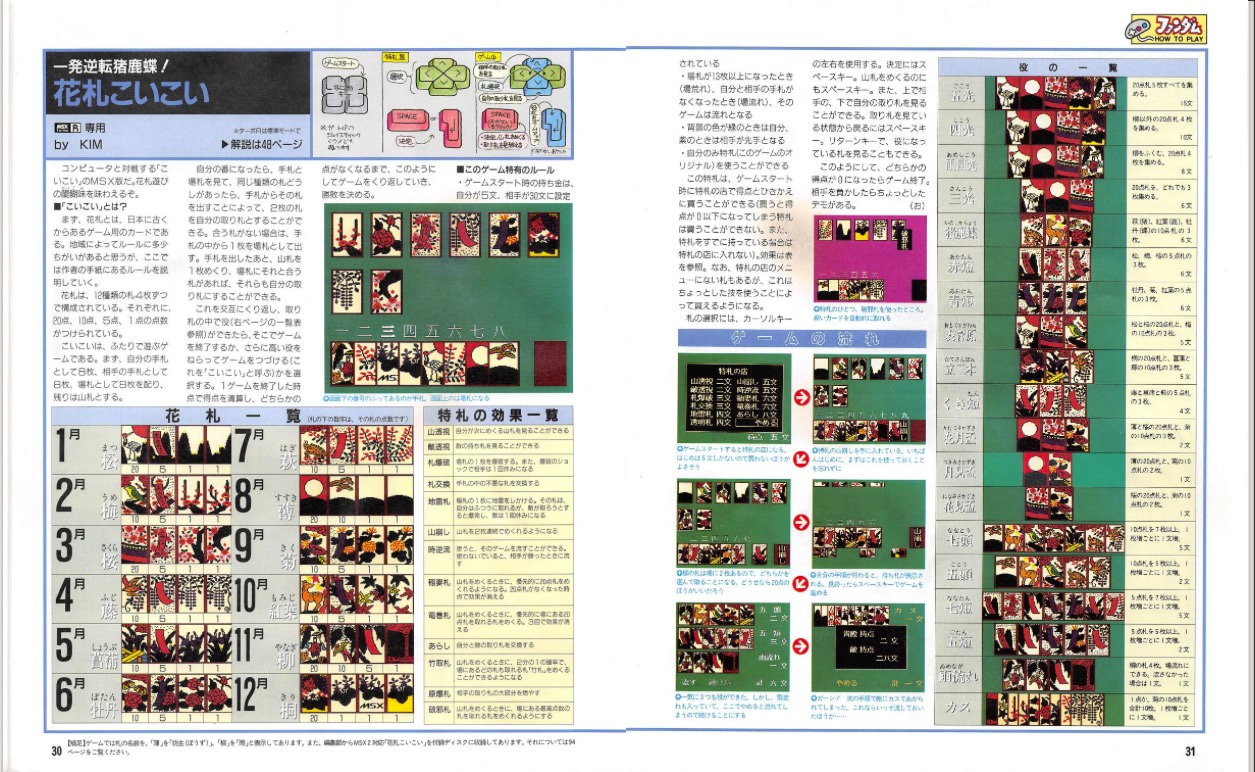 The MSX community is very helpful and open, because it has ties to the West - the platform was fairly successful in Europe. So it was easy to find an archived scan of the magazine, and an image of the floppy disk elsewhere.

I then set about using the fMSX emulator to install the game to a blank floppy disk. And to a ROM just for kicks. At this point I hit a roadblock because the fMSX emulator wouldn’t play the game, though other emulators would, but fMSX is the only emulator that works on 3DS and playing on there was my goal. So, whilst looking into the source code for the emulator, I figured out there was a bug with the default settings for specific models of MSX. So I fixed the bug, submitted my changes to benefit other RetroArch users, and was finally able to play the game!

It’s an interesting version as it adds a shop between rounds from which you can buy special “trick” cards using the points give earned in the game. It is unique in that regard, and it was a pleasure to uncover it and play it. I doubt many people have played that game since the 1994!

Been meaning to learn Hanafuda. Will fire up Clubhouse Games I guess! 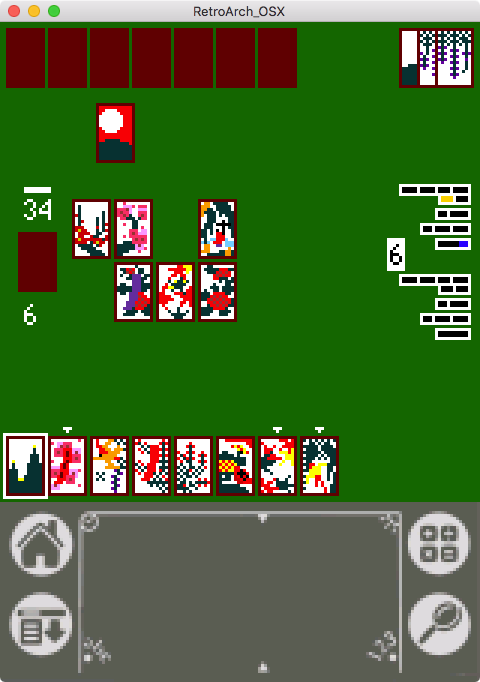 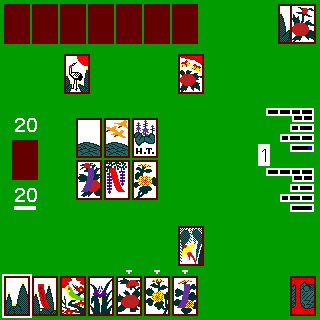 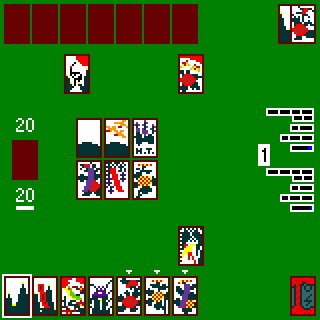 Back in the late 80s or early 90s that meant Acorn Archimedes, the first computer to use the now ubiquitous ARM CPU. But these days you can run RISC OS—which is now Free as in Open Source—on your Raspberry Pi, or on your computer using an emulator like RPCEmu (which is what I did).

This game was made in late 2018, so is likely the most recent Koi-Koi video game to be made. It plays at quite a slow (realistic?) pace, because it lacks the “automatic matching when there’s only one possibility” feature that most games have, you have to make every match yourself. But the CPU AI, which is documented and quite elegant in its simplicity, makes this a game I enjoyed playing.

The user interface is very RISC OS-centric: it uses three mouse buttons (Select, Menu, Adjust) and multiple windows. That and setup of RISC OS will mean this one is only for the most committed players. 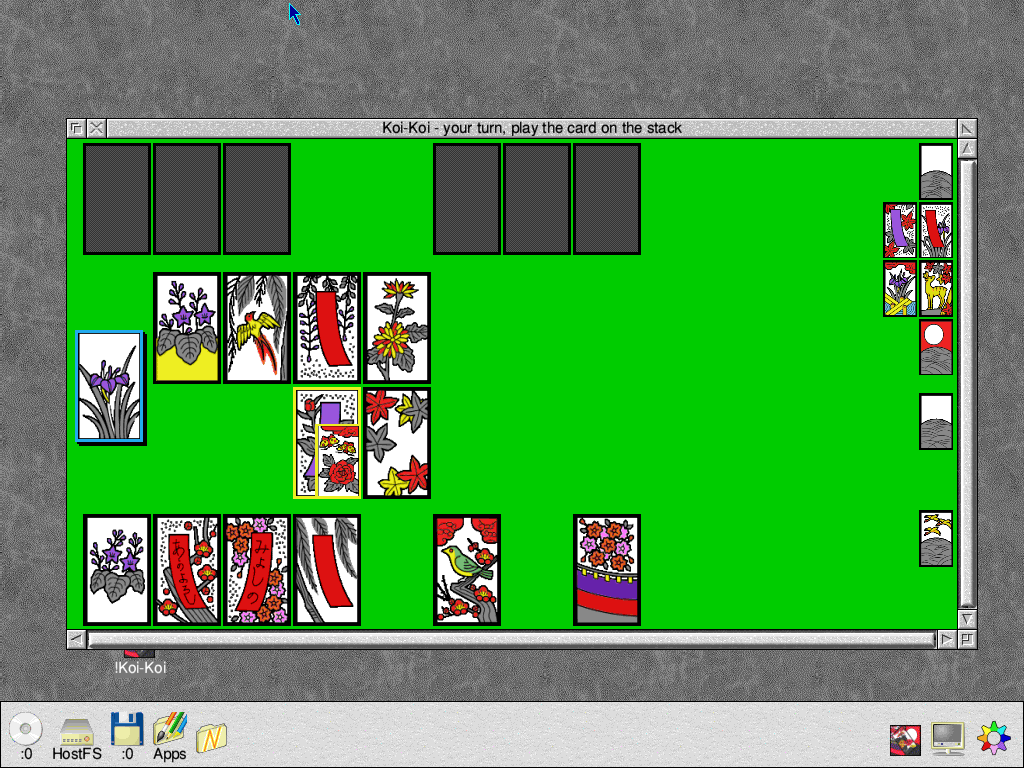 I found an old Mac OS X game of Hanafuda that I cannot easily run any more due to… sigh… progress? It’s called Koikoi Komachi and was released around 2005.

I really like the cards images in it, and was able to extract them. 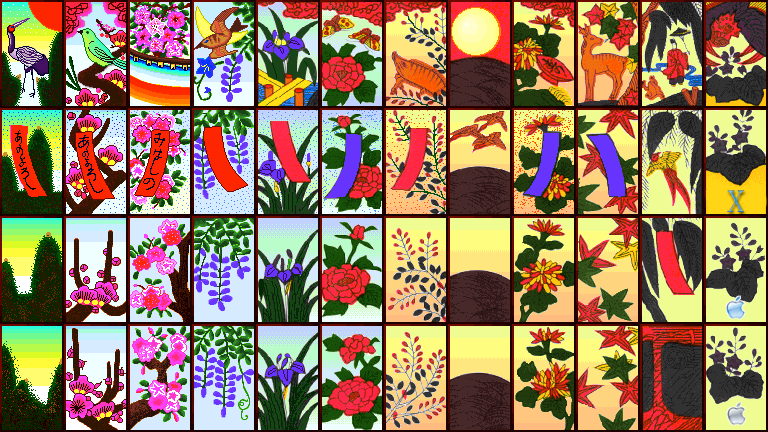 But I really needed to play a video game with them, you know?

So I did some image work to split and resize them and then used ROM hacking app Tim2View to inject them into one of my favourite PlayStation Hanafuda games! 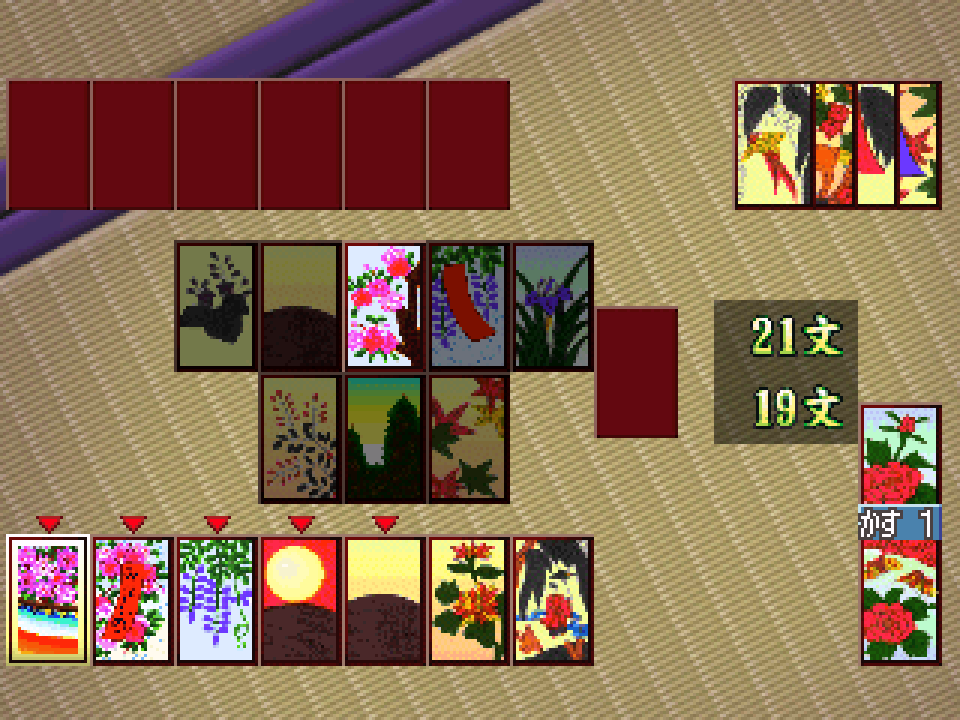 I played a bit of Koi-Koi again recently in Judgment and got my ass kicked. I really enjoy it but I need to spend some time figuring out strategies and hands because I just get rocked.

I play mostly on Palm OS which tracks simple stats - I’m currently about 65% win or 2:1 (win:loss) so by no means a pro!

I’ve recently taken to playing at Board Game Arena.

Play Koi-Koi online from your browser

Play Koi-Koi online from your browser

And I created some CSS to improve the look and feel of their game.

Check out the Hanafuda community on Discord - hang out with 38 other members and enjoy free voice and text chat.

I recently bought a whole bunch of Hanafuda games from Japan and will be diving in very soon. I’d like to document the endeavour somehow. Hmm. Not sure how just yet.

A year later I finally got around to converting an old Famicom/NES Mahjong controller (part of the order I referred to in my previous post) into a USB keyboard so I can play Hanafuda & Mahjong arcade games properly.

I used a Pro Micro (Arduino Leonardo compatible) to poll the NES controller (3 times per loop, this is effectively three controllers in one when you consider the number of buttons) and then types the corresponding key over USB.