How was Wario Land: Shake It / Shake Dimension?

As you might have seen from the black cartridge GBC game thread, I’m on a bit of a Wario Land kick. I finished the first game last week and have been slowly revisiting Wario Land 2, but in black and white.

It really reminded of how Nintendo R&D1 would bring their A game without fail to the series, rethinking and revamping what a Wario platformer could be with each new iteration.

But then I realised I haven’t tried the Wii game yet! Today part of that is down to how development duties had changed hands to developer Good-Feel rather than Nintendo’s oldest developer, who were disbanded in 2004.

But I also remember Shake It! just didn’t grab my attention back on release. Sure, the animated visuals are technically impressive, if sterile looking, but what I did see didn’t channel that reinventive spirit that made me fall in love with the series in the first place. A feeling Nintendo R&D1 recaptured with WarioWare Inc. Screenshots of Shake It! in magazines didn’t make me go “wow!” and wonder what had changed mechanically.

Good-Feel are mostly ex-Konami staff…looking at the credits of Shake It reveals a lot of ex-Goemon staffers, from game design, to programming, to direction, to sound design…that has my interest piqued a little.

But I really just wanted to know what your impressions were of it! From what I have seen it follows the template laid down by Wario Land 4 rather closely, so it has some big shoes to fill…if it doesn’t reinvent the wheel, is it at least a worthwhile sequel?

I thought it was as good as any Wario game, apart from maybe Virtual Boy.

It was faster and more spacious, escaping handheld screen resolutions. The Sonic/metroid-esque escape sequences were a nice change of pace from the methodical collectathon. And I thought it looked and sounded fantastic.

Of course the best thing around the game was the original ‘break youtube’ trailer, now only watchable in screen capture form: 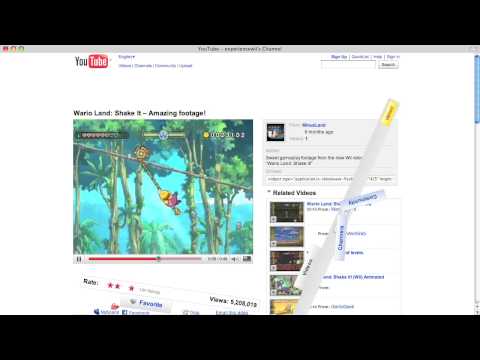 That was so good.

It’s an entertaining game. When it came out, I feel like platforming was something people looked down on. It didn’t matter if a game was good or not, people were just really down on anything “Nintendo-ish” at that time so unless you were on some mythical game forum where people took the Wii seriously, you’d never know if anything was good or not on the system. Sooooo many people hated anything with any kind of motion controls they dominated discussion and chased away people who enjoyed them.

That’s good to know! And thanks for sharing that old commercial, the footage within it certainly looked a lot more interesting than the early stages I watched from the game.

It was faster and more spacious, escaping handheld screen resolutions. The Sonic/metroid-esque escape sequences were a nice change of pace from the methodical collectathon. And I thought it looked and sounded fantastic.

How does it stack up to Wario Land 4 specifically? That game was also pretty fast, and the frog timer countdown escape sequences were really inventive…I remember one volcano level completely freezes over when you hit the frog switch, disorienting you immediately! The first level on super hard mode on 4 drops you straight onto the frog timer too…I’m hoping Shake It! is filled with inventive moments like that.

I’m hoping Good-Feel get to work on a platformer with energy like this again, the Yarn series of platformers didn’t really do it for me. After Kirby’s Epic Yarn they did come worryingly close to feeling like they were just rolling off the production line to fill a release schedule…