I figure this can be a thread for discussion of the whole series, given we’re expecting something to be happening this year with VF 5 Ultimate Showdown, VF x eSports or VF6. But initially, I want to talk a little about Virtua Fighter 2.

A little backstory since i like that kind of thing… I don’t think I ever saw the first VF in arcades, only in a Timezone (Australian arcade) magazine, but being at the height of fighting game popularity, i was very interested. And also looking forward to the next gen at the time, VF was getting a lot of coverage and I hoped to get a Saturn! But i ended up with a PS1 after seeing both, and it wasn’t until VF2 came out in arcades that I actually got to play the series. I liked ninjas, so i tried Kage and proceeded to die in quick fashion, and swore off 3D fighters for a good while as a result!

The series always had some kind of allure though, so many years after Saturn was off the market, I picked up a used console with the game. I don’t think i spent any considerable time with it then either, preferring to play Sega Rally. At some point I played VF4 on PS2 at a Toys R Us for an hour or so against some random guy and the back and forth with him was when the game and series seemed to click for me. Much much later I got a Japanese Saturn and VF2 again and that’s what i’ve been playing recently, along with the version on PS3 (get it while you can!)

I kind of know now why I died with Kage so quick back then - this game is arcade coin guzzler like nobodies business. I prefer Akira today and - opening myself up for all manner of “you suck” and “git gud”, it takes me over an hour to beat the game on Normal. The only solace is that i refuse to “cheese” the AI with repeated attacks or other things they consistently fall for. No fun in that. I’m kind of curious how long everyone else would take so please add to the thread if you can play!

The AI is what i’d deem utterly transparent in its input reading ability. This thing doesn’t just read your inputs, it reacts to them with no delay, which they could have added to at least simulate a real human, who has to see the attack before they can respond! It gets progressively harder to the point where it seems the AI is just a % setting of how often it will respond with the perfect counter to your input. Around the 5th character in is when it starts to get bullshit, and particularly with the grappler characters, who can often kill you in a throw and stomp in less than 5 seconds if you make a “mistake” - ie, you kick lol. If it’s high, it ducks and hits low, if you duck, they mid kick, if you block for a fraction of second, you get thrown. If you release block they do their fastest hit. It’s beyond infuriating!

Maybe because i’m old and stubborn, I still try and see it through to the final demoralizing defeat at the hands of Dural. Part of me wants to be able to beat it at its own game. By virtue of it almost always doing the same thing, the feeling of “just one more go, I know what it’ll do!” is very strong (also thanks to near instant rematches). The idea that if I can attain faster than CPU response time is part of the attraction I think. In that sense, is it actually a good thing that the AI is training you to become faster and faster and faster? It’s kind of funny, as a kid I remember early 3D fighters as being very sluggish, but in reality VF probably demands the fastest inputs of any fighting game and as a result, it feels near instantaneous when you’re actually playing. I have no friends around to play with anymore (and even if there was someone to play online, I wouldn’t want to suffer through that). But I think playing against the AI probably improves at least some skills you’d need against another human, which I don’t think is often the case for fighting games.

The game also has a simplicity that is attractive nowadays, where fighting games have so many moves and mechanics that it’s hard to remember them all. With a fairly limited amount of tools at your disposal, there’s not much redundancy, their usefulness seems more apparent, and you’re forced to make the most of everything. In a way, despite the later games improving considerably, nothing really feels like it’s missing from VF2. That doesn’t mean it’s perfect mechanically, just that you don’t really seem to think about the limitations of it’s systems. They all seem to be designed around this game or excluded intentionally if that makes sense. An obvious example is the lack of side-stepping - surprisingly I don’t find myself wanting it for it here, even though it’s a major improvement introduced later in the series.

That does apply to a lot of fighting games I think, or at least that’s why I feel I can enjoy older entries still; They can sometimes remain unique and developed enough in their own right, that they’re not made completely obsolete by their sequels. That’ll have to do for my conclusion

The VF i have the most experience with is VF4: Evolution on the PS2. I really enjoyed that game and played a ton of it, enjoying the map of the arcades and trying to be the best player in all of them!

I also got VF5 with a arcade stick when it hit the Xbox 360, but felt a bit burnt out on the concept after VF4. However have played some VF5: Final Showdown on Xbox Live since.

VF1 and VF2 I’ve played a bit of on Saturn, but mostly VF2 on the Xbox Live version.

Sadly I have never played or tried VF3.

VF3 on Dreamcast is the only one I’ve tried

I find it difficult to get into after being accustomed to the more free flowing combo systems in SoulCalibur and DOA.

VF is always a series I want to get into though. I’m a big fan of Yu Suzuki’s other games and know I’m missing out on it.

There’s a great version of VF2 on PS3 but it won’t be there long with Sony shutting that digital store down.

I might be crazy but I think I prefer playing the Saturn version. On the PS3, it’s wonderful feeling having the fully 3D backgrounds after so many years, and don’t get me wrong, it looks and plays fantastic. But the Saturn version on a CRT just looks more like how I remember it in the arcades and plays just as good. It also has more modes and options (extra options once you beat it too) that make it preferable.

Same as the X360 version and that is backwards compatible across the XB1 and Series X/S family!

I love that version, too. Saturn controllers are my favourite for fighting games. Not having played it is like not having experienced the 32-bit era. Thankfully the Saturn VF games, Fighting Vipers, and Fighters Megamix are all still relatively cheap (especially the Japanese versions). 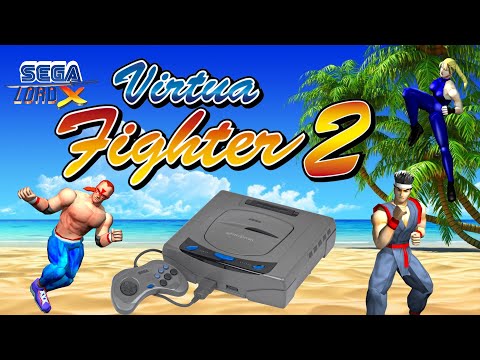 I found some interesting development stories of the PS2 version of VF2. It’s all in Japanese but you can get the gist with Google Translate.

Apparently they were missing a bunch of source and didn’t have an environment to build it anyway. I wonder what they ended up doing for the PS3/360 version then… were they able to find it later or is it another partial emulation?

Of particular interest is how he mentions the color difference with Model 2 on an arcade screen vs consumer TV. He had to adjust while comparing them to get a close match.

Model 2 is a beast! That’s a really cool read and kind of illuminating to hear about PS2 hitting some texture limits and how “about half of the graphic processing load on PS2 is “scroll” display processing.” I would have assumed something so old would have been beneath the PS2 but I forget how much more nuanced ports are than just looking at poly count sizes and CPU speeds.

I wonder if ‘normal TV’ is him talking about flat panels? Considering people play consoles on arcade monitors and arcade games on consumer CRTs I don’t think I’ve seen any mention of colour issues like that before.

Yeah I’m not sure! I do remember reading somethinng about Model 1, Virtua Racing having colour palette issues in Mame for a while. People mentioned it when the Switch port was clearly off (until it was patched recently). So maybe it was more to do with how Model 2 displayed colours vs PS2, but he had no choice but to compare by eye? Colour spaces and stuff like that.

Oh yeah, forgot about the VR colour difference in the switch port. Glad they patched the game, I think they said at one point they weren’t going to touch it.

Im really glad they did - just turning the gamma down by a 1/4 makes a huge difference.