Tanglewood, a new Mega Drive game made with old-school tools! TANGLEWOOD® is a brand new and original game for the SEGA Mega Drive / Genesis, coming 2018

Tanglewood is a brand new and original game for the SEGA Mega Drive and Genesis, to be released on cartridge following its successful Kickstarter campaign. A true 16-bit, nostalgic platforming experience running on genuine SEGA hardware, that will make fans of SEGA’s golden era feel warm and fuzzy. 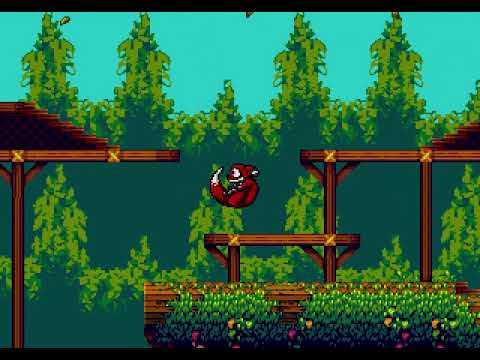 So, this dude got hold of a vintage devkit for the Megadrive, and decided to use it to make an original game with it, using none of the usual modern tools. He also ran a successful kickstarter, which I backed.

It is a bit cryptic and I do wonder if they used like an Amiga with Deluxe Paint for their pixel art.

The latest update came today, which prompted me to make this thread. Unfortunately this one isn’t about some fancy programming tricks, but instead to announce a delay. I mean, it’s Kickstarter, of course there will be delays. It is now due to Spring 2018.

It’s not a Kickstarter exclusive game either. Preorders will be opened at some point in the future, and hopefully the game will be available for a while. There’s a tech demo to download from the site, and you can register your email to get the news about the preorders.

Matt Phillips, the developer, had a couple of interesting interviews on the youtube channel Computerphile:

This is amazing, kudos to Matt Phillips for doing this.
The 6800 and 6502 assembly is probably the most learned and applied assembly formats ever, and the most prolific due to the incredibly wide use of the architectures. By the time the 8088 and the 8086 became mainstream there were enough system resources to get away with using a higher level languages.

I just talked to Richard Garriot a couple of weeks ago on twitter and he described how he designed the first 4 Ultima games in 6502 assembly.

It’s amazing that the system is so beloved that some are still making games for it.

That’s so awesome that he needs a Windows 95 machine running a 200Mhz CPU to get the Iso card to boot up. Vintage/Retro still has its place!

Keeping a sharp eye on this project!

I just received my copy! It came in an all new box with a printed manual and the cartridges are made from new parts as well. Being a backer I also got a postcard in the box, which is nice.

It’s also very pretty! I had a sense of how good looking it was with the Steam release, but it’s on a CRT that it really shines. I don’t think it has any technical breakthrough, but the visuals are very well crafted: an excellent pixel art, loads of animation and some big sprites makes for a very charming game.

As a game, it’s a puzzle platformer, where you need to find your way to the next level, collecting abilities and using contraptions. So far it seems relatively easy and requires more brain than skillful reflexes, though I only played the first two levels. It’s definitely a game kids will enjoy.

You can still buy the game for the Mega drive on the official website, though as a preorder. Or the game is available on Steam, which will also give you a ROM to use with your favourite emulator or load into your Everdrive. Go buy it, it’s cheap and the creators deserve your support! We need more quality releases like this one.

Where region are you? Wondering when I should expect mines.

Or the game is available on Steam, which will also give you a ROM to use with your favourite emulator or load into your Everdrive.

Oh that’s a really nice alternative! I’ll have to do that for sure, then stick it on the everdrive.

I’m in Europe, so it may take a few more days to come to North America or Australia, as it’s shipping from the UK.

One last thing about the Steam release: several bugs have been patched as you can see on their forum, and the version is labelled as 1.03. Make no mistake, it’s the emulator that got patched, the ROM is still the 1.00. Same as the one being in the shipped cartridge.

Got my Collector’s Edition box. Seems a step above other Kickstarter CEs that I’ve gotten. Sure I’ll never use the beanie but love the soundtrack on cart and the quality of the box itself. Also love how everything fits perfectly into the box.

Now to actually play the game…

That’s really nice! I need to play this game.

I wouldn’t have minded buying Tangelwood for the Megadrive, but then I saw the asking price of £54 and lost interest.

It’s the price of a quality physical release. If you only want the game, you can buy the ROM on Steam for £13.99 and put it in an Everdrive (or play on PC with the included emulator)

Is there a photograph of the Megadrive Tanglewood cartridge PCB floating around?

I am curious to how it is built.

Never mind I found one but I am not sure if this is final:

I can’t open mine as I misplaced my gamebits screwdriver, but it looks like that in their tweets. The PCB was designed by db-electronics.

Thats one of the best collectors editions I’ve seen in a long time.