Agreed. The only thing I can figure on Demon’s is that they worked something out as a non-compete with Bandai Namco when they took on From for the Dark games. They’re too similar and it would create brand confusion.

I had not considered this. Sometimes Sony can be odd. Their quirks are usually not as apparent as Nintendo’s. I always figured that Japanese corporations are less nimble. But that can be said for a lot of large organization no matter where they are headquartered. Either way, once it seems Sony no longer cares about a thing, it’s very hard if not impossible to get their attention again.

You can see this with their attitude for BC and their insistence to keep using PS Now when they got something better out of the tech Vue. Once they stopped caring about Vita, despite the effort of the large community of players they did their best to kill it. I am just waiting for the shoe to drop for PSVR. I am sure the minute I buy one they will stop focusing on it.

So my feeling with BB and Demon Soul’s is that they figured no one cares unless they hit Shawn Layden over the head repeatedly. Waits for Demon’s Souls T-Shirt at e3

I literally want every good Wii U game on Switch.

I have been trying to track down a copy of DKC Freeze Wii U for awhile. I think i still will, just because I don’t want to pay $60 for it.

On the other hand, I’m totally stoked for Tennis Aces. I hope they do a Mario Golf game on Switch, too.

Still having a hard time believing the $60 price for TF. Hoping it’s a placeholder. The game launched brand new at $50.

Demon souls is the real remaster I’m waiting for.

Sony really fucked up when they thought demon souls was a stinker and refused to publish it outside of Japan. Imagine if the entire souls series was Sony exclusive? That would have been huge when they were struggling way back in 3rd place.

Demons souls remains the only game the series I invested any serious time into. I loved it but didn’t finish (even though I think I was close to the end).

Although I really dig what I played, the weight of the character movement combined with the lack of checkpoints made certain deaths feel so overly burdensome and wore on me over time.

I beat demon souls multiple times with a variety of character builds. Every game since then has been a single play through and done. I think I’m a little burnt out on the formula at this point.

I just wish there were a way to start near a boss after dying without needing to trek through the whole level again. Like… you can sacrifice your stats to be weaker, but closer to where you left off in the level. It could’ve made things a lot more enjoyable for me.

I’ve put hundreds of hours into DeS and the DS trilogy on PC over the years. Probably closer to nearing the thousands considering my steam log only counts the hours in DS1 after the removal of GFWL (which is when I entered the key from my physical copy into steam).

Definitely buying it on the switch. I can’t fucking believe I’m gonna have Dark Souls on a handheld. It’s insane.

I love demons souls , but im not buying another PS3 to play it again. I’n seeing how emulation progresses as Sony obviously don’t give a shit.

The Souls games are about the only series that still feels like it was designed with me as the target audience, if that makes any sense, so I will always be excited for them.

I tried to start Demons a couple times but never made it past the initial area. It’s just not for me. I have thought about trying Dark Souls

Its an acquired taste. At first the souls games can feel punishing and confusing but once they click… Oh man they click

Confession. I never beat a souls borne game. Even though I always enjoy myself and it seems custom made for my gaming tastes, I just can’t seem to stay with it. I get to a wall and if I don’t get over it in a week I don’t come back. I’ve started over on BB about 4x already. I hope it sticks someday

Usually it’s my kids. My son will go through periods of poor sleep and that’ll keep me from gaming for a week or two and then I’ve atrophied.

Demons Souls was my favorite game on the HD twins, sucks it looked up on the PS3, it should be enjoyed by everyone. Also completed DS1-2, but got a bit burned out by Bloodborne, and thus hasnt tried DS3. Need to rectify that when the complete edition comes out!

Amazon had the PS4 version for $20 US yesterday as well but it looks like it sold out. 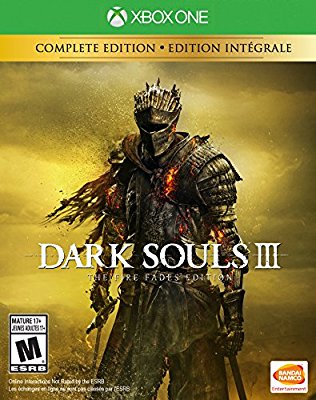 Awesome, definitely getting that!