Double Dragon series - the biggest waste of potential ever?

The arcade game was a big hit. Clearly based on Hokuto no Ken (itself heavily influenced by Mad Max 2), the post-apocalyptic punks based beat am up with the catchy name is one of the most iconic gaming brands of the era. 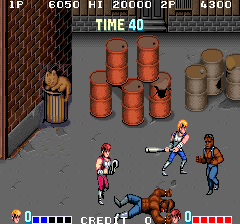 The game itself was somewhat janky, but it had some okay ports to consoles in varying quality, the Famicom/NES version being the most famous. 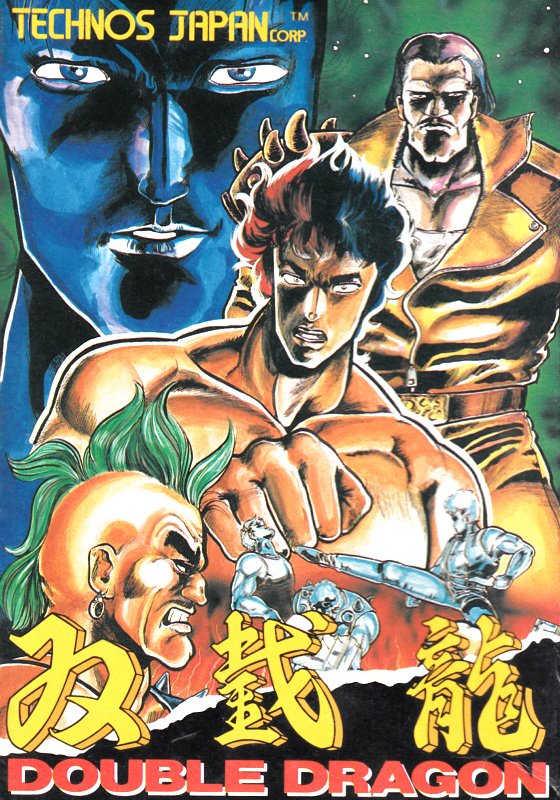 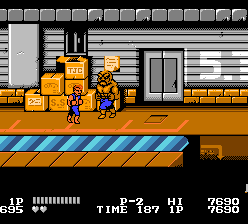 Double Dragon II was another arcade hit, but this time it got a superb Famicom port which IMO remains the pinnacle of NES/Fami beat em ups. 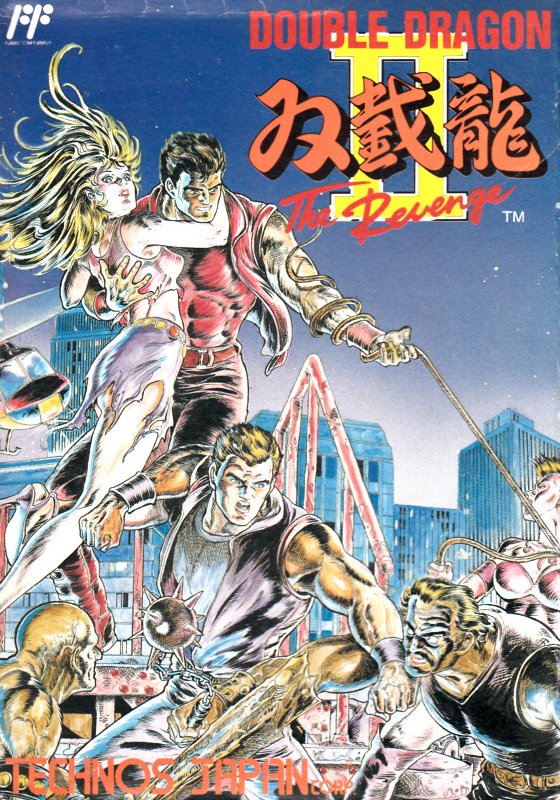 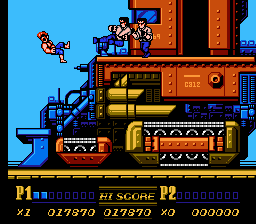 And that’s really it for Double Dragon. A few later licensed ports/sequels of varying quality (Advance, Neon and the recent stupidly named IV, despite there already being a fourth main game).

From one of gaming’s top brands with a cartoon and movie, to dead, in less than ten years.

Sure lots of other properties have languished in more recent years, like most of Konami’s portfolio. But none were as big a name as DD, or fell apart as dramatically in what should have been their prime.

Yea, the brand feels very diluted. The ports and genre mixups give it a very inconsistent feel.

I’d argue the best thing to happen from it was Battle Toads and Double Dragon - which I think I enjoy most on Genesis (I’m not as familiar with it on SNES or NES). But the gameplay is really more Battletoads than DD (which is probably a good thing).

Are DD and River City Ransom considered to be in the same series? It’s all very confusing.

No, River City Ransom is part of the Kunio Kun series of games. Most of these stayed in Japan though.

I think Neon is damn good. I know it’s totally different developers and basically sort of a parody of the original, but I think it has some amazing and hilarious moments peppered throughout.

Hitting Skullmageddon with a comb followed by “How does that even hurt?!” had the kids and I in stitches.

So Kunio Kun and Double Dragon are not related then…

Also… welcome to the site!!!

I still need to play Neon and Advance. I loved 1 on NES. It has a ton of nostalgia for me with all the neighborhood playing it. I’ve yet to beat it…need to spam some save states I guess haha.

You forgot to mention the worst Double Dragon game ever! 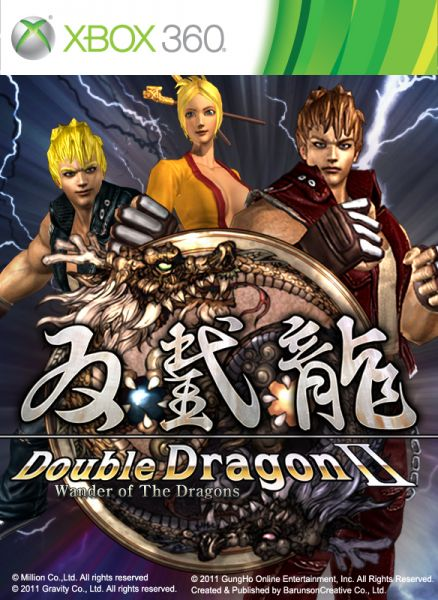 I played this piece of dog shit and after beating it I deleted that filth from my hard drive and would never want to play it again. It really is the worst game in the entire series for me, it’s nearly unplayable with a choppy framerate that seems under 30fps most of the time, a stamina meter that when it runs out you can’t even attack at all(one of the worst things about the game IMO), cheap enemies and bosses, unnecessary quicktime events, hilariously bad music, plays very sluggishly and there’s no fun to be had with this game!

While the franchise was mismanaged hard after NES DDII, I just don’t think the Renegade/Double Dragon brand of belt scrollers had much of a future after Final Fight came out and did most of the things DD did (beside janky frustrating platforming, I guess), but like, eventy zillion times better.

I played through Double Dragon on the Genesis the other day. It has a really cool design but there were a lot of issues with the control (I assume that’s just an issue with the port though).

I remember loving Double Dragon back in the day and it would have made a lot of sense for them to ride the Final Fight and Streets of Rage train to something much more memorable and awesome.

Technos clearly had issues. I didn’t even know about the sequels until I was in college. It’s like they had no idea how to take advantage of being heavily featured in The Wizard.

I believe Double Dragon was the first arcade cabinet I got to play and even the janky Spectrum port which was my main way of playing it for some time didn’t stop my love of the game.

Really dissapointing how the series fizzled out and after Street of Rage came out on the Megadrive there was little reason for me to wish for another Double Dragon.

Eeeeeh I think Final Fight is shallow and crap. All it has over DD2 is bigger sprites (and better hardware being later). Bare Knuckle games are much better.

Return of DD has the best kung fu fighting gameplay of any of the era IMO. It was just rushed. With more time and budget (and 60fps) it could have been THE classic of the era IMO.

I don’t see how FF is more shallow than DD. They have similar amount of moves, but FF’s moveset is far more functional than DD’s and it has three characters with (somewhat) different moves and attributes while DD, doesn’t.

Its enemies are also much more varied in AI and attribute than Double Dragon (Hollywood/El Gato alone has way more going-on than anyone in the first two DD). The only thing DD really has over FF mechanically is platforming elements of dubious merits and that enemies can pick up and deny weapons to the player. While 1cc playthroughs of the arcade Final Fight will make use of all the characters moves at one point even if they abuse Cody’s infinite punching exploit, arcade DD1 can be pretty much steamrolled by spamming the back elbow and nothing else.

I don’t think it’s a coincidence (or an error of the market) that as soon as FF came out, we stopped seeing beat em ups with small sprites and janky “stun enemies to grapple” systems, and that nobody adopted DDII’s dumbass direction-based attack scheme.

I don’t think it’s a coincidence (or an error of the market) that as soon as FF came out, we stopped seeing beat em ups with small sprites and janky “stun enemies to grapple” systems, and that nobody adopted DDII’s dumbass direction-based attack scheme.

I don’t think it’s a coincidence, but I don’t think Final Fight had anything to do with it either. Double Dragon killed itself, little to do with Final Fight. No timely SNES game release, when it was released it was half finished, too much outsourcing and crappy licenced stuff, legal battles with US publishers, Technos focusing on the (more successful in Japan but harder to westernise) Kunio games, Street Fighter II relegating genre to the sidelines, and then Technos going out of business were the reasons.

Double Dragon at its peak was a much, much bigger brand than Final Fight ever was. Nobody made Hollywood movies and TV shows of FF.

Double Dragon is one of my greatest memory in arcade as a kid. It’s still one of the best beat them up for me, once you choose to not abuse of elbow strikes, kinda boring I guess.
The Kunio-kun serie is closely related. Technos did first Renegade/Nekketsu Kōha Kunio-kun in arcade, then DD was an evolution of the concept, then it became two independant series with derivative elements, like the oriented striking in DD2 coming from Renegade etc
I slightly prefer the original Nekketsu Kōha Kunio-kun in arcade, I find the gameplay so perfect and fun.
The only one who can surpass it, fo me, is Final Fight. The original arcade version of course.
I personaly think those arcade beat them up’s have to be played as closely as they were designed, on the original cabinet for the lucky ones, otherwise with a good emulation (like maybe MAMEshmup on a 5ms screen or CRT if it’s possible ?) with an arcade stick. The Switch on tabletop mode with an arcade stick is a decent alternative when emulation is good.
I know beat them up is a genre where the characteristics of a good game are rarely discussed, and however various depending the person. For me it’s not about the size of the move list (often the opposite) but more how the gameplay constantly occupies my mind.
The Combatribes is another great beat them up from Technos, I can easily imagine the fun with three players in the arcade. A cool evolution of the original Nekketsu Kōha Kunio-kun gameplay with some DD vibes.

It’s true that Double Dragon was an actual brand. The fact they made a movie based on the games certifies that. The creators clearly didn’t know what to do with it past the first couple games though. The SNES game is good, no doubt.

I think a lot of it is the Japan/US thing… everything that came from Japan in that era had to get westernized in shitty ways. That’s just kinda how it always went. It’s amazing when you look back at how many of the best Japanese games were the ones they didn’t eff with quite as much. You think all the US publishers putting out the ones that got mangled beyond recognition would have realized that.

I loved Neon. The OST was also top notch.

I liked the music more than the game itself but it’s still a good game!