Great arcade games that have never been ported

There are a lot great arcade games that sadly have never been ported. Which unported games would you love to see find their way to consoles?

Here’s one I hope to see as an Arcade Archives release in the (hopefully not too distant) future:

Violent Storm is an amazing beat 'em up with great graphics and fun gameplay. At the time of its release in 1993, fighting games ruled the arcades and beat 'em ups were on their way out, so a home release would probably not have been very profitable.

Luckily, thanks to companies like Hamster we’re seeing more and more releases of previously unported arcade games, so I think chances of Violent Storm finally getting ported to consoles are quite high. Crime Fighters and Vendetta (aka Crime Fighters 2) have already been ported and since Violent Storm is kinda seen as a continuation of that series, I see no reason why Hamster wouldn’t complete the trilogy.

Mitchell Corp’s Gamshara, a gallery shooter that is yet to be emulated. 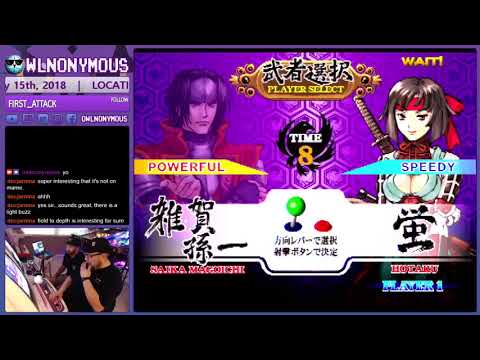 A game along the lines of Cabal, Blood Bros. (both by TAD Corp, some of whom became part of Mitchell Corp), NAM-1975 and Wild Guns.

Never heard of that one before. Looks like a fun game!

This description is a bit more accurate?

a company specializing in low-budget ports of arcade games to consoles. The line started on the PlayStation 4 in May 2014 and was introduced on Nintendo systems with the launch of the Nintendo Switch, initially focusing on SNK’s Neo Geo system before expanding to other arcade titles, including Nintendo’s own arcade games.

Arcade Archives releases are straightforward emulations of the target title and thus do not include new content or any changes or additions made to a game’s home version. All Arcade Archives titles include remappable controls, access to the DIP settings to modify gameplay parameters, suspension saves, online leaderboards, three display settings (raw pixels, blurred or blur + scanlines) and Caravan and Hi-Score modes.

Arcade Archives releases may also include different variants (regional or otherwise) of the game when there are notable differences. Donkey Kong and Donkey Kong Jr. are the only Mario-related releases to support this feature, allowing players to choose between the original Japanese release, the later Japanese release (only the case for Donkey Kong) or the international version.

Golden Axe: the revenge of Death Adder.
I know it came out on the Astro City Mini, but I wouldn’t mind a port with some modern adaptions on it like the the Capcom arcade and M2 ones.

Aliens Vs Predator was done on that Capcom home arcade thing. Did anyone actually get that? I’ve not seen or heard much about it since it was announced.

I’d also like to see AVP with some extras as well.

lol I wrote that 2nd description

Heh, The Revenge of Death Adder would’ve been my original pick for this thread if it weren’t for the existence of the Astro City Mini.

Man, I love that game!

So in other words it’s worse than MAME. That does everything arcade archives does but with much better filters.

Nah, Arcade Archive’s cool! For a low price and a consistent release schedule, you get ever-reliable packages that include the baseline features every rereleases old game should stand to have and leaderboards against a truly worldwide audience, and not just a crusty decades-old forum thread with a dozen of inflated scores.

And while they’re not as fancy as the likes of M2’s, many Arcade Archives actually have subtle tweaks and added value that shows the people behind these releases know their shit.

-ACA Zero Team is the original version. This one is not playable in MAME as they still have yet to break the copy protection - all the playable variants are jank clones on inferiour hardware.

-ACA Omega Fighter is emulated perfectly while it still has glitches in MAME.

-Some games that are counterstopabble in their original form (like Strahl) have their ACA release keep a counter of the real score in the background so that the leaderboards remain viable.

-Their e-manuals are actually helpful, accurately explaining mechanics and items. The one for Raiden even mentions the obscure fact that the level of dynamic difficulty is determined by which attract mode you insert your first coin at, which is a mechanic only a handful of Japanese pro players were aware of.

-Some other releases have minor enhancements. You can reduce the hitbox in Trigon, the aforementioned Raiden lets you start on loop 2/3/4 etc difficulties as well as set the starting dynamic difficulty without having to wait through the attract mode. This week’s release of Raimais fixes a glitch that made the secret ending impossible to unlock legitimately, etc.

I will however concede their filters are indeed dogshit. Which is strange because they actually have a good scanline solution already but only a minority of ACA releases use it (Here’s how Atomic Robo Kid looks like with 100% sharp scanlines for those curious).

I’m not super familiar with arcade games overall but I like beat-em-ups a lot!

Ninja Baseball Batman hasn’t been ported as far as I know. That’s one of the best beat-em-ups I’ve played style-wise, and very fun too. Very manga/comic book looking.

Speaking of comics, I love Xenozoic Tales by Mark Schultz and (aside from MiSTer) Cadillacs and Dinosaurs hasn’t been ported or released in any compilations I know of either. I like it a lot, despite it being pretty straightforward in the landscape of 90s beat-em-ups.

The Cliffhanger: Edward Randy is as ridiculous as it sounds, but it has great visuals and setpieces. It is a little chaotic for my taste in spots, but it’s still a good time.

My original choice was Warrior Blade Rastan Saga but I saw it got a port on PS2. I still heartily recommend that one!

Excellent picks! I think all of those have a chance of eventually being released on modern home systems, except one: Cadillacs and Dinosaurs. Licencing issues likely prevent it from ever seeing the light of day again. The only way I can see that game resurface is on a dedicated machine (like how Alien vs. Predator was featured on Capcom’s Home Arcade Console a couple of years ago).

Atari’s I, Robot feels like it will never be officially re-released. It’s an awesome game, too.

Yeah, that’s quite an intriguing and unconventional game. I’ve only played it a few times, but I’d love to give it another shot.

It’s pretty funny that there’s an option to play an “ungame” where you can just draw 3D doodles for a few minutes. I dig that kind of silliness!

I spent so many quarters on Crime City. I expected it to get ported to some 16-bit console back then. Mystic Warriors is even better.

Yup, those games are fun. I hope they’ll be released for modern consoles eventually.

Mystic Warriors has the dubious honour of being the final game I was able to play on my GPD Q9 handheld. I was having a good time, but all of a sudden the d-pad fell apart. Yeah, the entire thing just broke off. Still makes me a bit angry when I think about that. I’ll never buy a GPD product again, lol.

Mighty Pang - haven’t played it myself so I’m going on @matt’s recommendation but I really do want to play it, and to my knowledge it has never left the arcade, not even via some sort of emulation-powered compilation like Capcom Arcade Stadium.

I will however concede their filters are indeed dogshit. Which is strange because they actually have a good scanline solution already but only a minority of ACA releases use it (Here’s how Atomic Robo Kid looks like with 100% sharp scanlines for those curious).

That minority are all Gotch developed ACA releases.

Another arcade game I’d like to see ported is Sega’s A.B. Cop.

It’s a bit like a futuristic Chase H.Q.: bump baddies into oblivion with your vehicle (in this case, a hoverbike) before time runs out. It’s a lot of fun! Also, the graphics are quite impressive, thanks to Sega’s Super Scaler technology.

Sega seems to have completely forgotten about this game though, so chances of a port are rather slim.