Revisiting Another World/Out of this World

This year will be the 30th anniversary of the groundbreaking French platform/adventure game, Another World (renamed Out of this World for its early North American versions and Outer World in Japan). It was originally developed for the Commodore Amiga and has been ported to numerous formats since. I was intrigued by it from the moment I saw its unique and stunning art style in magazine screenshots. But since I didn’t have a computer newer than a Commodore 64 in 1991, and the one Amiga owner I knew didn’t have the game, I had to wait until it was ported to consoles (which wasn’t guaranteed to happen). 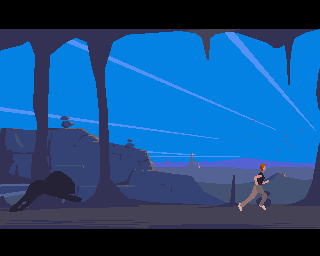 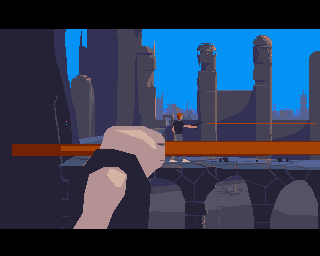 The first console to receive a port was the Super Nintendo. After reading some positive reviews in Electronic Gaming Monthly, I asked for that version for Christmas 1992 alongside Sonic 2 on Genesis and Shinobi II on Game Gear. With those Sega games, I knew what to expect as they were direct sequels and pretty safe bets. I was a bit nervous about whether or not I would like Out of this World, though. 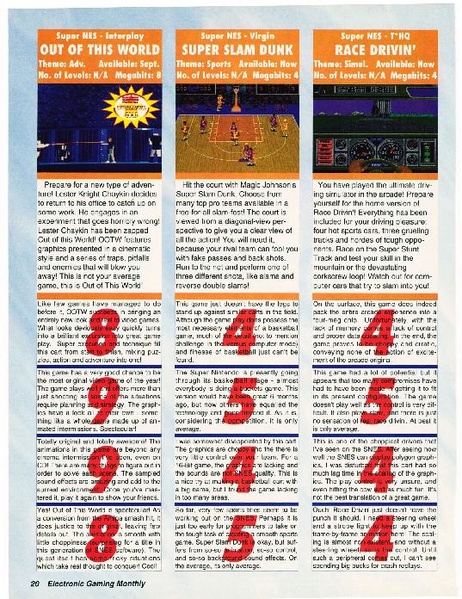 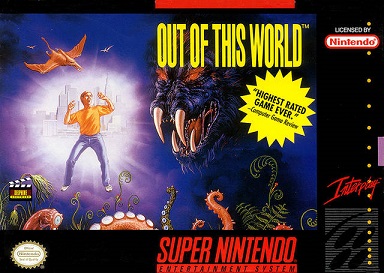 When I first fired up the game, I was greeted to a cinematic intro unlike anything I had seen before, even on the new CD-ROM formats. The smoothness and detail of the animations was incredible, something still pictures hadn’t prepared me for.

The gameplay starts with you being teleported to an underwater section of a foreign world, and you need to swim to the surface. You are never really told what to do in the game. It’s up to you to explore and find ways to advance via environment manipulation puzzles or running from enemies (or shooting them later on). Compared to most games, there is a lot of trial and error involved. With its death scenes, I was quickly reminded of the old Laserdisc arcade FMV game Dragon’s Lair, and that’s not coincidental as creator Eric Chahi cites it as an influence.

Unlike Dragon’s Lair which is an interactive cartoon and only has basic inputs such as tapping a direction at certain points, you have a lot more control over your character. Controls are very similar to its other big influence, Prince of Persia, with its “step-based” jumping, i.e. your character leaps after its current running animation instead of immediately. The old Tomb Raider games also employ this type of platform jumping but in 3d space. These type of games have since been labeled a sub-genre of platformers. Former game industry writer Travis Fahs (some of you might know him as Frogacuda on message boards) coined the term “cinematic platform game” in the 2000s and I think it suits these games well. Platform game - Wikipedia

It didn’t take me very long to beat Out of this World but it was so satisfying. And there are plenty of creative moments in it that I don’t want to spoil for newcomers.

Other people I showed it to back then were impressed, too. My dad wasn’t into video games and often commented on how many of them looked like the same thing over again. Not this time. He loved the movie-like presentation and wanted to try it. He jokingly asked if I chose the main character’s hair colour since I had red hair. I’m mostly bald and grey haired now. I suppose I haven’t aged as well as the game.

My great uncle was staying with us that Christmas. It was the only time I ever met him and I was shocked that someone over 60 years old in 1992 was already familiar with it. He was visiting from England and mentioned it being called Another World over there. My Amiga owning friend (also from the UK) wasn’t much of a console fan and didn’t really like most SNES/Genesis games I showed him but he was blown away by its art direction and detail.

Another World never had a sequel that did the original justice. EGM labeled Flashback as a sequel in a preview but that turned out to be a different cinematic platformer from the same company, Delphine Software. Heart of Darkness, a 1998 Playstation/PC game made by Chahi and Amazing Studio, shares some similarities with Another World but not quite enough that I would call it a spiritual successor.

The actual sequel is an odd one. It was exclusively released for Sega CD and only came out in North America (not counting the recent homebrew Amiga port). I beat the game while renting it in 1994 or 1995 and honestly don’t remember much about it other than the fact you play as the alien sidekick from the first game and they made the death scenes more gruesome. It was now the blood and guts Mortal Kombat/Doom era after all. I liked it but nowhere near as much as the original. It was developed by in the US by Interplay and after its release, Eric Chahi expressed disappointment with it and said it didn’t fit with his vision of the series. At least Heart of the Alien includes a quality port of the first game. 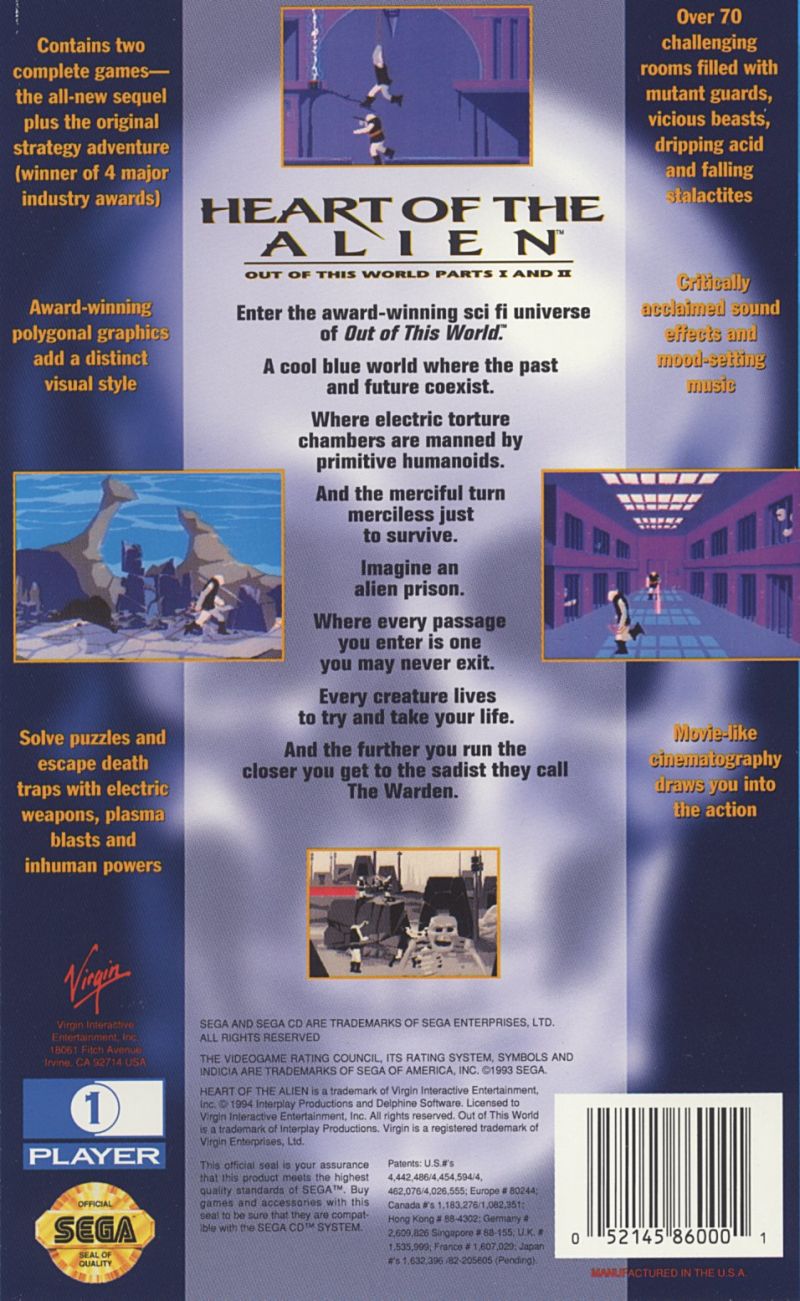 In 2006, Chahi released a PC remaster of Another World with some touched up graphics as Another World 15th Anniversary Edition (the same name across regions this time). This was the first digital-only game I ever bought. Several ports based on this have been made available since. I had fun replaying it on Vita, PS4, and Switch. There have even been physical versions from Limited Run Games in recent years. I can’t say I ever expected to buy a Nintendo system cartridge version again but I’m not complaining.

What are your thoughts on the game?

I’ve still never tried this one. But your write up was excellent. I’m going to give it a chance.

I played it on Atari ST. I loved it, and it made a real impression on me, even though I could never finish it. I’d always get stuck, or get bored of dying, and I didn’t have it in me to start from the beginning so much. It’s a difficult game. More so pre-internet!

The thing I love about it most, as you say, is the art direction. I didn’t realise at the time but some of my favourite games on the ST, and from this era in general, were French. They had a certain something. Je ne sais quoi.

The opening scene of Future Wars was another big memory for me. The rest of that game is quite poor, but Chahi flexed his creative muscle perfectly for that opening scene.

Later in life I learned this vibe was referred to as The French Touch. I also learned of Moebius, and other great French comic book artists. This made me love and appreciate Another World even more.

Another World has been recently ported to Pico8. Which is another level of accomplishment! 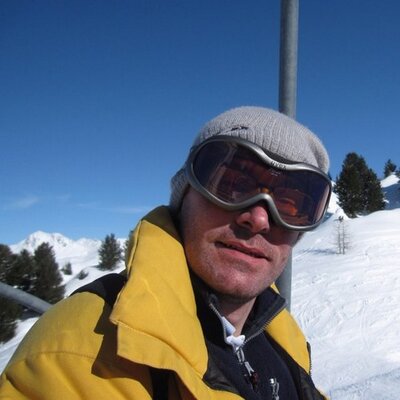 I was heavily into the Amiga when this came out, and subsequently it was one of my favorites on the system. That opening cinematic is really something special.

I’ve never got beyond the first few screens but I should really fix that. Tim Rogers called it the best game of all time when he made his first list back in the 2000’s (he’s making a new list now on the Action Button YouTube channel).
http://www.actionbutton.net/?p=431

Yeah, Future Wars’ opening stands out. I remember seeing it on a friend’s Amiga back then. I played through the game several years later and enjoyed it. It may not be the best designed adventure game but the atmosphere carries it.

Yep I watched the 6 hour (?) review of Tokimeki Memorial even though I have no interest in that game or even style of game. The Doom review was my first exposure to him and I highly recommend it.

My best bud bought this for his Megadrive and while I sucked at it big time, he managed to get through it all. Although he would often be absent from school just after acquiring a new game. Coincidence? Regardless, I kind of enjoyed the game, although I didn’t appreciate the experience and remember aspect. But when someone who knew all the bits and what to do played it, it was a good watch. I was unaware of a direct sequel, might look into that.
Was aware of Flashback though, that game was more to my liking.

ps: I friggin’ love this game.

Okay, here’s a somewhat serious response, and I’m sorry in advance if I’m being elitist here…

Play it on the Amiga, please! Even if you have to emulate! Or play the 20th anniversary version!

The crunchiness of the bones shattering when you vaporize someone with your pistol is easily worth the price of admission, and overall the sound is SO much better. The voice synthesization is much clearer and realistic. The overall sound here is so much crisper and meatier. Everything sounds real and authentic and visceral. The sound design is a huge defining factor in why this game is so amazing.

On the SNES they lost it in the sound dept. It sounds off in a lot of places, and they cut out sounds that the sysem wouldn’t do properly (or maybe weren’t allowed to do, like the aformentioned bones shattering), then they masked the whole thing with this horrible game music that drowns out all the atmosphere.

The Genesis port has its own issues with sound, entirely different than the SNES port, but it’s also nowhere near the Amiga sounds. The elvator sounds like nails on a chalkboard, and the overall quality of the sound is really diminished.

absolute classic. Same with Flashback. I have Another World on 3DO and love it

I agree the Amiga version is better than the 16-bit console ports. I was just happy it had solid ports back then so I could play it. I never liked the overhauled graphics in the 3DO version. It’s not ugly but they damaged the signature look.