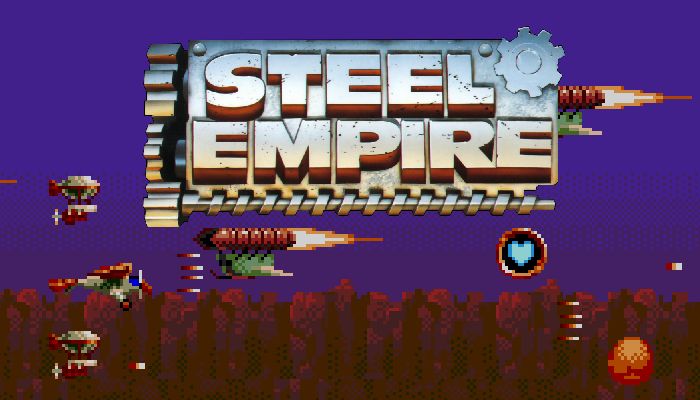 I’ve updated the website with the new game, man the periscopes!

I had a few goes over my lunchbreak and boy this game is much harder than I remember! It really goes hard from early on.

Also you better be quick with your camera/screenshot button if you’re not breaking a million points on your run, I couldn’t get a shot of my sub million scores

Are we concerned about version with this one? It’s available a lot of places now.

Steel Empire (originally released as Koutetsu Teikoku (鋼鉄帝国) in Japan, and otherwise known in various English materials as The Steel Empire or Empire of Steel) is a side-scrolling shoot 'em up video game released on the Sega Genesis home console in 1992. The game was later ported to the Game Boy Advance in 2004 and to the Nintendo 3DS in 2014. Steel Empire is notable amongst shoot 'em up games for its unique aesthetic designs. Mostly low-tech in nature, with its being set in the late-19th centur...

I’m not familiar with the scoring enough to comment. Maybe @Suteneko knows?

Nobody clocked a score yet? I still can’t break the one million point barrier to hit the scoreboard so I can take a picture

I was hoping for clarification on version before running it a little bit. I own the Genesis version.

I think we can just stick with the Genesis version. I think most people here either have a flashcart or can emulate.

I have been playing the Megadrive version.

HOW ARE YOU SUPPOSED TO DODGE THAT FINAL PATTERN

I think you can pause the game when you die, before the game over screen. Should help!

Nice score! I’m going to play a bit more, will post once I get a decent enough run to break 1mil.

Finally got some time to put in a real attempt… this game is hard!

I managed to get to 6-B, the bullets are so fast on this stage!

Nice! I need to have another few goes… that mid-boss in level 2 is a real killer

Interesting the game doesn’t loop, so it’s just three best you can score in one shot.

Slightly unrelated question, but how good (bad?) was the 3DS port? One of those games that I just remembered existed, but with the eShop due to close and all…

I just installed it to check it out.

Really good! The graphics are redone from scratch, and they look great. The game feels a little more punchy, the sounds and explosions are more apparent and they are done really well. The super bomb explosion is like WOAH!

The gameplay is mostly the same, but the enemy patterns and bosses are different. The scoring is completely different, you get like 15k points per stage instead of 300k and up.

Overall, I’m impressed… the 3D effects are nice, the gameplay is done right, and it’s a really good port. Worth checking out if you like the Genesis version.

I took my revenge! Screw this game

Damn you! I don’t know if I have it in me to beat it… lol