I’ve updated the website with the new game, let’s get alien slaying! 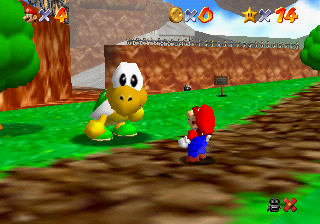 Koopa the Quick is a large Koopa Troopa that Mario can race twice for Power Stars in Super Mario 64 and the remake. He is one of the competitor characters in the game along with the Big Penguin. According to what he says, his home is the "huge"...

In Super Mario 64 , Mario first meets Koopa the Quick in Bob-omb Battlefield after defeating the King Bob-omb. He only appears in the mission Footrace with Koopa the Quick. He is seen at the entrance of the stage and will challenge Mario to a race from there to the top of the mountain where the Big Bob-omb originally resided. Once Mario accepts his challenge, the race will start.

Knowing very little about the game because I haven’t played much of it… here’s what I found out.

Bom-omb is the first area, just go in there, and get a star (I went to the top of the mountain and defeated the king). After that, when you re-enter the level you can race Koopa the Quick.

Should take you less than 5 mins prep to get to the spot you can race and compete in this challenge.

Here is a save file those with an Everdrive. Put the file in your SD card under \ED64\SAVE

And here’s one for Retroarch Mupen64. Put the file in your Retroarch/states folder and load up the “Super Mario 64 (USA).n64” rom. It’s the nointro rom, and if you google search for that, you’ll find it on archive.org.

However… the cannons aren’t open yet. If we use the cannon, then the run will be significantly different. Thoughts, @Peltz?

@Peltz are we allowed to use the Wing Cap?

Edit: scratch that just practiced this - cannons and wing caps are NOT allowed. Warps are allowed.

Basically, you have to fulfill the conditions to get the star when koopa eventually catches up to you.

If you take cannons, he scolds you for not running the whole course. And wing caps also make it difficult for people to just jump into this one since you need to collect over 10 stars to activate it.

So, no wing caps or cannons allowed. Just a standard foot race.

You have to get this message when all is said and done:

Awesome thanks for sorting that out. I think this will be a fun one.

Okay I’ll be the first I guess!

Pretty clean run, but I made a couple big mistakes that could save a bunch of time.

Last day for this one, I can’t believe more people didn’t submit on this one! C’mon guys, let’s get a few more times in.

I really wanted to but I’ve only got the 50hz PAL cartridge handy.

Would the Super Mario 3D All Stars version count? Otherwise I can load up a 60hz version on ParaLLEl RDP.

I think any version would be okay that’s got the same timing. Not sure if the PAL one is different or not, maybe just the game speed.

I can’t imagine the 3D All Stars one would be different, go ahead and do it!

Cheers! Managed a decent attempt - but there’s potential to shave off some seconds if I’m consistent enough with those early long jumps…

This is going to serve as my submission:

Awesome! Looks like I’ll have to make a few attempts tonight

Well, I don’t think I can go much faster… I’m terrible at this game lol

I really wanted to long jump off the goomba at the start but it only ever happened unintentionally for me, and I’d mess up the attempt afterward

Tip: use the two shortcut warps. There’s one at the flower bed after crossing the first bridge. There’s another on the mountain leading up to the flag in the crevice where the black cannon balls come out of.

What game would you like next battle? Assuming Peltz is winning this one, so you get to pick.

Tip: use the two shortcut warps. There’s one at the flower bed after crossing the first bridge. There’s another on the mountain leading up to the flag in the crevice where the black cannon balls come out of.

I never knew about the flower bed one until now, wow. I only used the other warp up the mountain.

What game would you like next battle? Assuming Peltz is winning this one, so you get to pick.

A lazy pick would be to do something similar but with Super Mario Sunshine’s races, but I’ll give it a pick. It’ll probably be something on arcade archives I think.

Sounds awesome, I’ll get it set up (hopefully) today sometime!