so over at resetera, there’s a recent thread for retro game collection tips/etc, and like every few years these things popup, i’m partly happy/partly horrified to see folks encourage others to spend $500+ on “good deal” non-neo geo games, because let’s face it, much of this bubble doesn’t seem to be bursting anytime soon. i made a post to show what the craigslist scene looked like just about 10 years back (all pickups from 2013 alone) and i’m gonna post it here to start a thread of folks bragging about $10 copies of MUSHA they got in the mid aughts, boxed earthbounds TRU dumped for next to nothing in the mid 90s etc etc. there’s a lotta old heads here with me, let’s brag about the stuff you got before the bubble for good prices! here goes…and remember, this isn’t even the garage sale or online stuff i picked up in that era, literally just 2013 craiglist, with pics & prices where i can 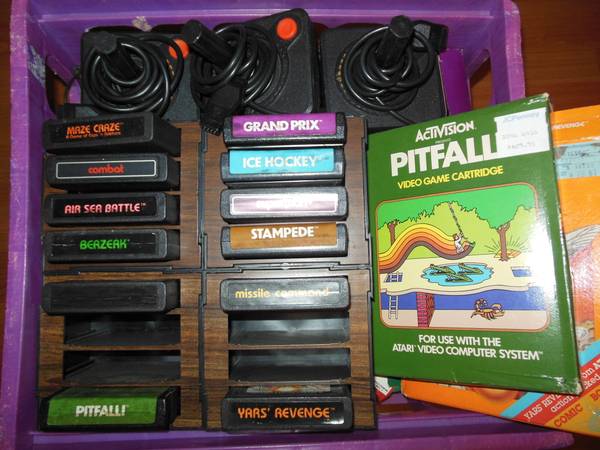 $40 - not pictured are a classic woodgrain Atari 2600 with 10 of those boxed games (receipts on several of em!). drove a half hour north one morning for a nice old lady who said no one wanted this junk 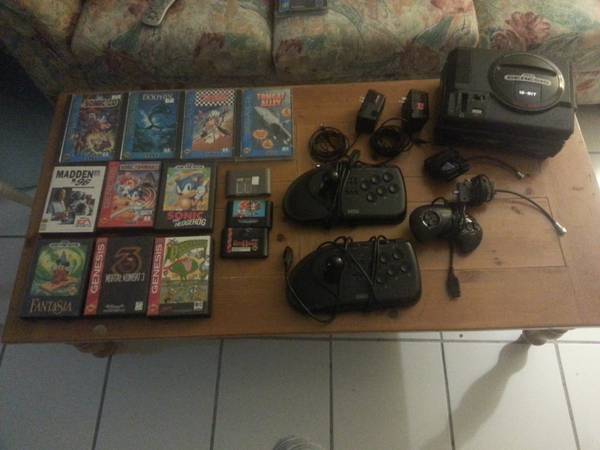 literally raced to this one coming off shift early in the morning - dude wanted $50 but said he had a lot of callers, i got there first and offered $60. the model 1 sega-cd got tons of play and worked fine until late last year, it needs a recapping i think but ive the newest everdrive and use that more often these days. just so happy to have the model i grew up with 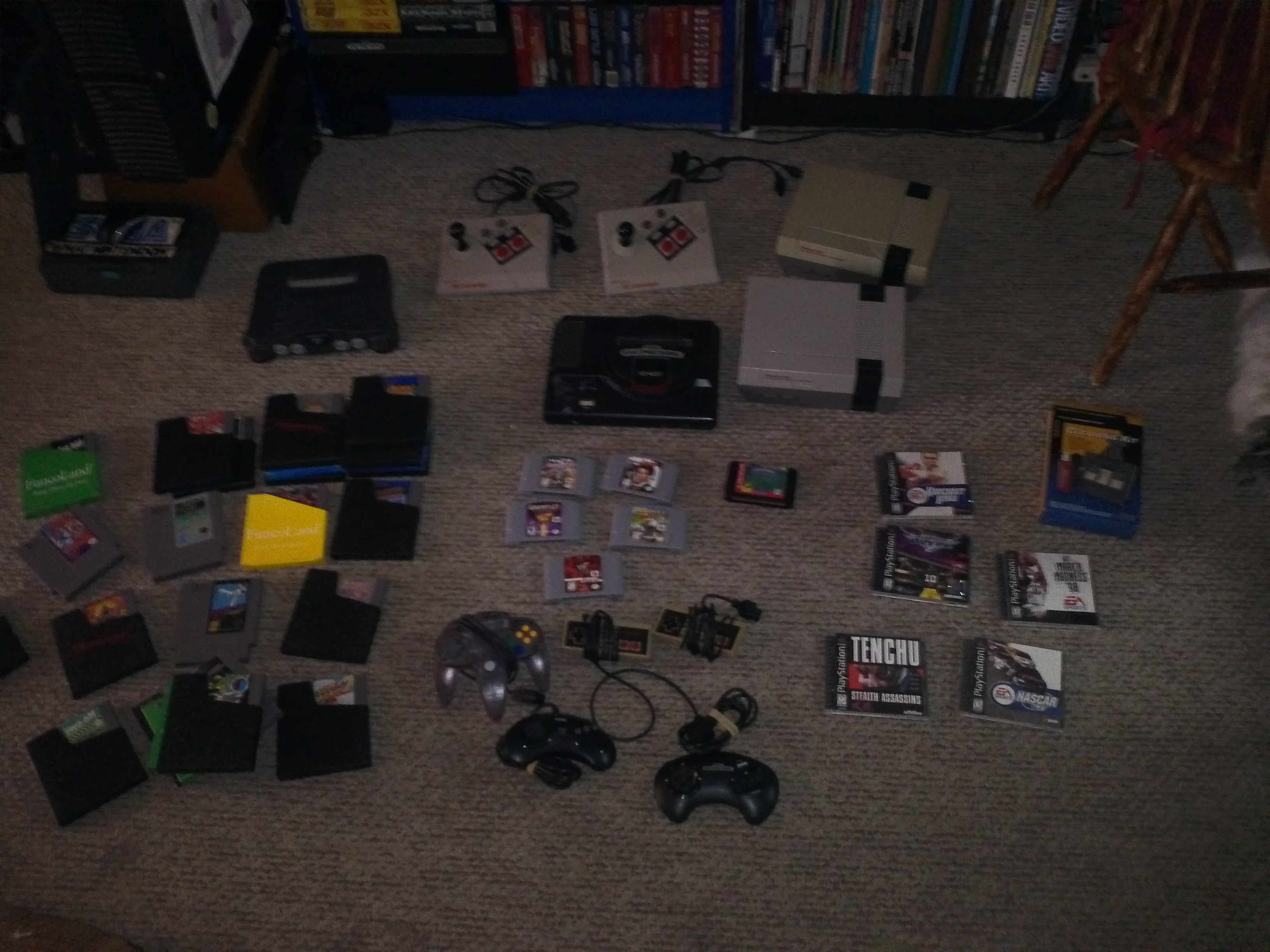 this deal was insane. $30 for everything!

young couple like 20 minutes from where i lived then needed room in the garage for in-laws, gave me a big box and said its yours. they were in a hurry, i waited to get back to my ride to go through it…maaaan. it kept giving too, double dragon 2 was in one of the NES’s! everything needed a cleaning, but with all the extra hardware i gave out a lot to friends for the holidays 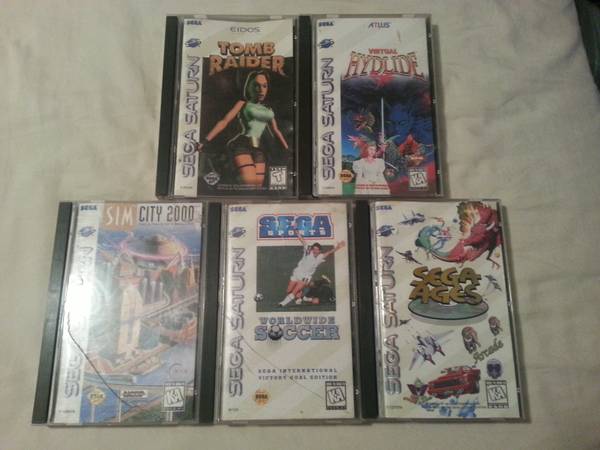 another one i had to race when off shift to get - nearly an hour north, but dude listed it at $40 and took $50 after a bunch of calls. i’d been after sega ages for a bit and would’ve paid the same for that game alone.

what’s even crazier is by the holidays, another guy up north was literally selling off his stuff after his partner cheated & he wanted to leave…felt bad for the guy, but he sold a nearly new/boxed saturn with 4 games (guardian heroes, sonic 3d blast, fighters megamix & sonic R) for $50, just asked me not to resell and i’ve kept that promise.

oh! right before christmas, another guy by a bar out here took $50 for drinking money for much of the first 2 years of nintendo power.

don’t get me wrong, many of us who grew up in these eras took for granted that things would not stay so easily accessible/undervalued forever, but the sharp contrast from literally years of stuff like this - hardware being tossed, bundles of software going for next to nothing - felt like it went away so fast. game chasers stuff took off and it felt like the comic industry in the early 90s, only without the implosion. i really miss being able to find boxed SNES stuff at garage sales and being able to gift wrap em for friends i know would appricate it.

am i drunk? oh most definitely, but let’s keep going

soooo i used to use this meta craiglist search for stuff out of state, and i found this one gal that worked at some kind of pawn shop over in arizona…she had some good price on a listing for like, street fighter alpha 2 (saturn) and i reached out, she said the shop only took money orders

now, i’d known for over a decade at this point (thanks, ebay) that this was an easy scam route…but she wanted like $25 or so, and i took the chance. took like a month, but lo and behold, a mint copy showed up! we kept talking for a while, i think i paid $50 for shining the holy ark, nba jam and some other fighter. all in superb shape, given how often US saturn box hinges show up broken.

nintendoage was a wealth of deals if you sifted through the shit back then. so some background: i didn’t like paying more than $100 for a game, i paid like $95 (tax included i wanna say?) for phantasy star 4 at launch and will still swear it’s worth every penny, but in the early 2010’s i felt it was common knowledge that with few exceptions, that was too much for an old game. here’s some of those exceptions!

one night a user posted a copy of panzer dragoon saga for $250, looked sharped but i drunkenly messaged offering like $150. he messaged back and said: what if i throw in shining force CD and called it $225? i bit, and was super happy with both games.
few weeks later, same dude hits me up unprompted: $175 for snatcher + final fantasy origins or whatever it was called for PSX (he’d seen my want list posted there). i’d loved the condition of the last purchases, so i bit. wish he had more stuff, honestly.

oh! anyone been to gaijinworks? it’s victor ireland (working designs) site…i know, i know, he’s controversial but i was a fan of much of their work. one guy sold me lunar 1 (PSX wide) poster and lunar 2 (sega-CD) posters both for $50, these were the ones you had to mail in back then with a form from the respective strategy guides, so i don’t see them often. gave the lunar 2 to an old roommate but still felt good.

somebody on retrocollect back in 2014 took $40 for elevator action returns (saturn). i still adore that game.

for actually back-in-the-day stuff…my neighborhood toys r us was dumping master system titles before dropping the console (this was before the genesis ports started, so i guess like 1990 ish?) and i got golden axe warrior for something like $10. it’s a really great zelda clone if you’ve not played it!

for free. i forget who this was. if you’re on this site? know that i love you

Wow, those are some sweet deals!

I don’t have any pickup posts from back then. I can see some ebay receipt emails?

I did recently come across pictures of my 2005 set-up however.

I got some good eBay deals back in the late 90’s early 2000’s but nothing compared to this. Very upsetting

am i drunk? oh most definitely, but let’s keep going

I do love how your tag remains relevant.

I’ve got some stuff. I’ll post when I get home and can take a few current shots…

These were recent… $115 for both. SFII was worth that much at the time. Pretty sure it was mis-marked. I wasn’t complainin’.

Damn that’s a nice setup. I love how everything fits so perfectly like you played Tetris with all your items to blanket the whole wall in goodness.

Those are some crazy pick-ups! As someone who had to import a Mega CD a couple of years ago and the three and six-button arcade sticks recently that is an insane bargain.

I don’t think I got any deals as crazy as the ones you’ve posted but mostly I’ve just aged into a bunch of expensive stuff and got lucky with things like CRTs. Managed to get some pro video monitors just before things quadrupled in price and availability dried up.

Definitely agree with the acceleration of retro collecting costs over the last few years as I feel so lucky with things I only bought maybe 1 or 2 years ago.

Here’s some of my better Mega Replay pickups over the last few years, before they went to ebay pricing

Is this a current pickup or a cheap one?

so very well done here, damn! prices on almost all of them are crazy now, and so much quality there too!

so i didn’t wanna swaggerjack the big pickup thread, just wanted this one to be about stuff you got in the past!