Really wish I had played this one earlier. Much has been written about the first Tokyo Bus Guide, which hit Dreamcast at the very end of the 90s, and later, PS2. Tokyo Bus Guide 2 arrived half a decade later but it also appears to have largely gone under the radar.

And yet I really cannot recommend it enough! Here Success Corp and Voltex inc have expanded upon the original to produce a highly engaging, demanding ‘arcade’ simulation that might top my personal favourite in the genre, Densha de Go: Ryojouhen.

Tokyo Bus Guide 2 ditches the first game’s Odaiba setting in favour of the general Tokyo Metropolis, explored via three Toei bus routes at three separate times of day (difficulties). Having denser environments with a lot more traffic on the road really helps the game capture the manic difficulty of skilfully driving a hulking bus along a long route. For instance, route 早81 immediately throws you into a mini roundabout at Waseda university, around less populated narrow streets, before taking you across to Meiji Park and later, the busier Harajuku and Shibuya stations.

The primary appeal lies in executing your job as a bus driver skilfully, ranging from the obvious (following the route, being on time) to the less obvious (making sure you don’t slam on the brakes every time you slow down).
While this is enormously satisfying on its own and frankly, easier said than done - making the Dreamcast and PS2 original worth playing - the sequel’s busier and more varied roads, and vastly improved camera options make every route more engrossing than I anticipated.

The game’s at its best when it’s most demanding, when the traffic is so built up that you feel the pressure to make it to the next stop on time. It’s then that that you’re forced to change lanes to ensure you make the next green light. This is, again, easier said than done, since you’re making split-second decisions, thereby forcing you to indicate/signal, display your left/right mirrors and then oh-so-carefully manoeuvre your bus around surrounding vehicles.

The expanded camera options in this release are there to help you do a good job, and ensure it’s always your fault if you mess up. The traffic AI is also particularly well modelled, but not too realistically to give you a chance of having some fun. Sometimes you’ll have to begin accelerating before cars behind you give way, other times just indicating guarantees safe lane switching.

Add to all this a relaxing soundtrack from, rather unexpectedly, Motoi Sakuraba(!), and expert use of the DualShock 2’s pressure sensitive buttons and you’re left with a rather special game. One that doesn’t take itself too seriously either - plenty of fun to be had driving unsafely just to hear the negative reactions to your driving from passengers behind you. Angry customers will even send you letters of complaint - I got a couple from an old lady after braking too hard several times.

As with Densha de Go, the rising demands of next generation development presumably meant we never got a Tokyo Bus Guide 3. But this game did receive a budget rerelease via the Superlite 2000 line. Check it out if you fancy a challenge behind the wheel of a heavy vehicle! 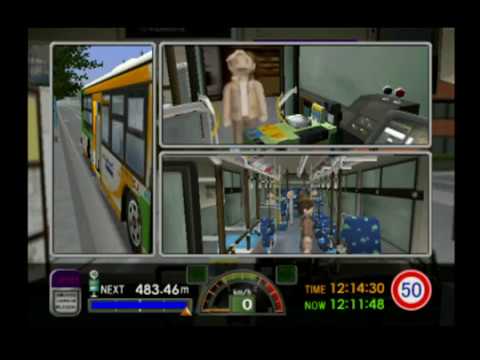