The things you cant find thread

I am SURE I am not the only person in this boat lol…so it would be fun to hear others “holy grail” items they just can’t manage to find! Especially because a lot of times the hunt is as much fun, if not more, than the item itself.

Fighting Bujutsu on the Konami Cobra Arcade board. Been looking for near to two years…zero results. One sold and was broken and I missed it

Poly-Net Warriors. Also a Konami arcade game running on their Polygonet arcade board. Real early Model 1 style graphics. Been looking for over a year…no results!

D2/Clayfighter assets or betas for the 3DO M2. Been looking for 5+ years…found one SPECK of D2 and nothing for ClayFighter.

Dolphin demo disc for the 3DO M2. I know one collector who has it…will not part with/dump it…not for any money offer. So trying to find a second source

Some real holy grail stuff but I am surprised the two Konami arcade games, which did release are so damn hard to find.

But what’s your grail item? Plus if we all know each others wants if we see it we can give each other a heads up lol

Puyo Puyo Tsuu for Macintosh. Only listing I’ve ever seen for it they want 50,000 yen which is bloody well insane.

This thing I should have bought when it was cheap and easily found. Now, it’s hard to justify the price:

Amazon.com: HORI The Legend of Zelda Retro Protector for Wii U GamePad...

Also in a similar vein, nearly any n3ds cover plates. Especially this one:

Kicking myself for waiting for the price to drop years ago.

Panzer Dragoon Saga - I don’t think this needs much explanation.

Metal Slug 6 on Atomiswave - finding a genuine cart is near impossible. They’re mostly bootlegs. It almost makes me just want to burn the new Dreamcast port that guy made. And the version released in the anthology is just not good enough. It’s the only Metal Slug game on original hardware that I’m missing (that I care about at least - that PS2 3D game is a hard pass from me).

A decent super gun- every time a new one comes out that people recommend, it’s sold out indefinitely. I just can’t keep up with this stuff.

PS5 and XBOX Series X - pretty sure I won’t be able to find one until holiday season 2022 or something.

I bought a bunch of cover plates I don’t use since I stick to my N3DS XL. I think I have all of the solid colors. Are they worth much?

The solid color ones, not so much. But the glow-in-the-dark Boo one is another $$$ option I should have snagged at the time.

Panzer Dragoon Saga - I don’t think this needs much explanation.

Expensive, but quite easily found.

And the version released in the anthology is just not good enough.

Do you know if the stand alone release is different from the one included in the anthology collection?

I’m a big fan of Toshio Iwai so for me it’s Tenori-On for the wonderswan, 15 years of sporadic searching and nothing. 120 copies produced, only sold at a couple of his events in Japan. Although given what the only auction I know of (and missed yay) sold for by now it will be far too expensive even if I do find it.

Video Games Densetsu: The WonderSwan version of the Tenori-On / テノリオン, a… (tumblr.com)

Do you know if the stand alone release is different from the one included in the anthology collection?

I am not sure to be honest.

I’ve been trying to find a good copy of Power Strike and Golden Axe Warrior for the Master System for years, and haven’t managed to see a single copy of either with manual.

I’ve seen Power Strike with cart only and without manual, but never complete.

that’s always the strangest thing when you just cant FIND it.

First one I can think of is a 20" BVM. The D24 or D32 is the real holy grail, but even a 4:3 20" BVM is getting up there now. Prices have gotten absolutely insane over the last couple of years. Anytime I manage to spot one for sale they’re asking primo ebay prices and they’re usually beat to death with a million hours on the tube.

I still want an Aquaplus P/ECE. But I’ve never seen it available in the colour I want.

Some real holy grail stuff but I am surprised the two Konami arcade games, which did release are so damn hard to find.

Shou has a copy of Fighting Bujitsu, it seems as if the rarity comes down to the hardware being so prone to failure.

“Most of these boards are dead and have been thrown away as it has 2 major failure points: a suicide battery and hard drive. Most people do not know how to resurrect the game so unfortunately, it has become extremely hard to find. I have not seen any arcade in Tokyo with this game in the last decade.”

I forgot to mention my hadware grail, aside from the obvious desirable cabs like a Mini Cute, SC14-2 or Pony Mark III have always loved how the Taito MT-8 looks with the awesome SNK style hood and lighting, such a beautiful machine and a genuine rarity. 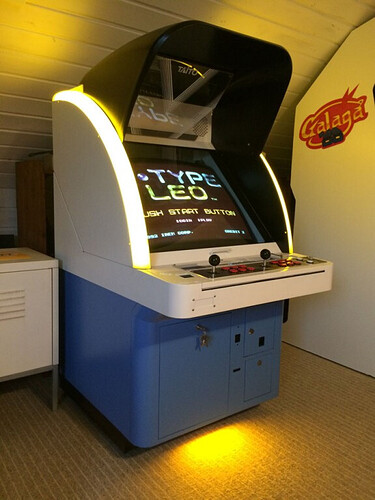 Got it - so Panzer Dragoon Saga wouldn’t fit this thread. In that case - in the North East of the US, I struggle to find a single decent candy cab to buy. I’m not sure I even have the room for one or would pull the trigger. But it would be nice to at least be tempted to grab one. They basically don’t exist in these parts.

Yeah I saw ShouTime has one. I know of one other board in existence and that was cobbled together from two separate broken boards with different issues.

The RTC I can fix if the board is dead. I’ve learned enough about Konami and their damned battery backed clock chips to work around it lol

But even finding one in the first place is maddening

Same issue in Chicago. I haven’t seen one local for sale in a year. It’s all freight shipping from the east or west coasts.

I’d like an Astro City or Jaleco Pony cab running a Hanafuda game.

Popils GG was my last holy grail and I bought that a few years back.

I’ll have to think if there’s anything I just can’t FIND.