What's the game you have had in your possession the longest? And also your most recent game 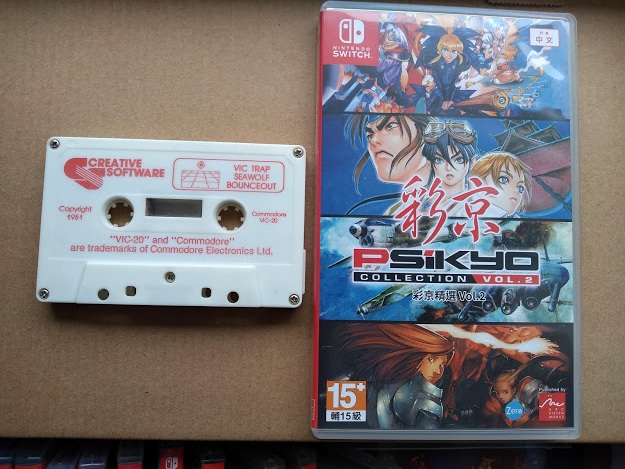 Post photos if you want or just talk about your two games.

I have had this Vic 20 Creative Software compilation continuously in my collection since the early '80s (and it still works as of testing it last year). Over the years when I have sold Vic hardware and software, it somehow always managed to stay put. Psikyo Collection 2 I got in February 2020 and it’s the most recent physical addition to the collection.

Probably ninja gaiden or castlevania on the nes. I just got in a lot of games so it’d be a pain to list.

Last night I saw a good deal on magic knight rayearth and jumped on it.

Tetris for Game Boy. I sold my NES and games to a friend in 1991. I bought a Game Boy in fall 1992, with Tetris packed in, and haven’t sold much of what I’ve bought ever since.

At work so don’t have pics but I have my original Game Boy and Tetris, and the first game I ever bought myself (with birthday money) was Double Dragon on Game Boy, which I also have. Will post pics later.

Probably Wario Land 2, definitely something on the Game Boy though.

Here they are, Double Dragon, and most recently another beat em up - Slaps and Beans!

Is Slaps and Beans any good?

I sadly sold all of my 8 bit and 16bit stuff and had to recollect it over the years. But that means my oldest stuff that has been continuously in my possession would be my N64 stuff.

So oldest game is Star Fox 64 if I had to guess. Newest is Mario Golf (also on n64) that I randomly picked up two weeks ago at a local shop when I needed some repair work done on my Dragon Warrior 2 cart.

Kinda cool how they’re both on the same system

Imma reply to this thread with mine this weekend. My first might be a little further back than you folks… and yes, I still have the original.

I haven’t opened it yet, but supposed to be solid. Surely only recommended if you know Spencer and Hill movies, it’s a pastiche of 70s Italian slapstick.

Oldest games I have had since new are definitely my Master System games, as I have had them since new. I don’t know how or when, but a bunch of the boxes, manuals, and even two carts (Montezuma’s Revenge and Penguin Land) went missing.

I also used to have quite a few more games like Zillion II, Transbot, Pro Wrestling, and Afterburner.

I also have a high score book that I kept since I was a kid. It has high score sheets from most of the games I had for the SMS.

I had lots of older stuff from the VIC-20 days, but that’s all long gone now

My newest game (that’s not a retro purchase) is Xeno Crisis on Steam. Not a very exciting purchase, but man it’s a fun game.

That is a cool hi-score book you kept.

Yeah, that’s neat. I didn’t play most SMS or NES games for score but I did have a handwritten book for cheat codes. I never kept it, though.

I still own the first game that I got with my first console: Sonic the Hedgehog on the MegaDrive. For some reason I do seem to have lost the manual. Coincidentally the latest physical release I bought is also released by Sega: Yakuza Remastered Collection for PS4.