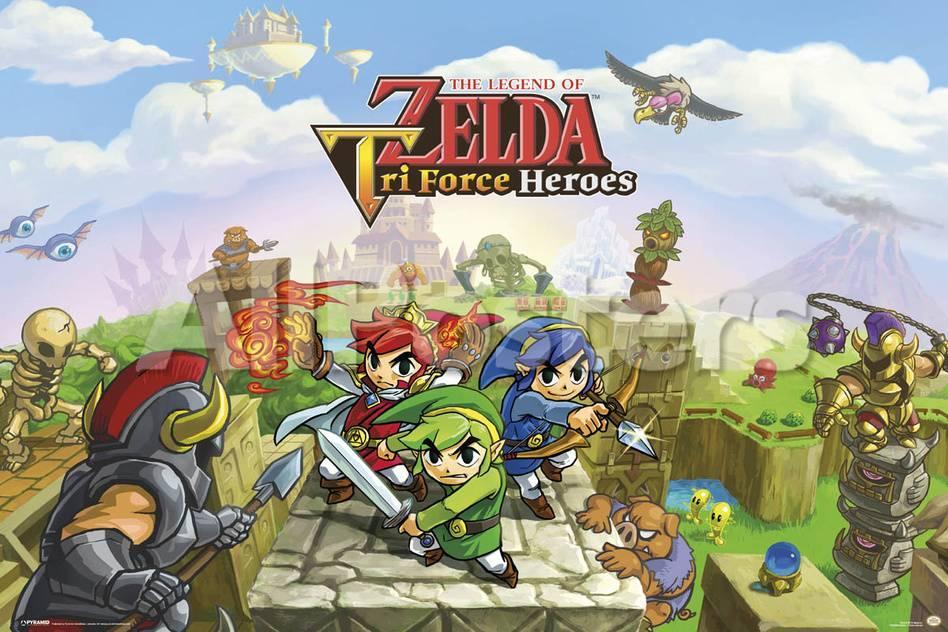 I want to start a fresh play through of Legend of Zelda TriForce heroes with two fellow RGBers. I would like to start totally fresh - new save file and everything and re-discover what it’s like to play this game. I haven’t played it since launch, but I remember it being a lot of fun, yet I never had time to finish since I was working 70 hour weeks when it came out and just couldn’t stick with it.

I figure three of us should do it and could even have a separate 3-way voice chat too if people are down. Or we could communicate via just in-game options if you prefer. I’m willing to work with other people’s schedules to make this happen, but I was hoping to start today.

Here’s the thing, I love the Legend of Zelda series. It’s probably my favorite series of games I’ve ever played. The problem with Triforce Heroes is the unnatural-ness of it. It is nothing like a traditional Zelda game and I love the idea of it mostly being a puzzle solving game. Breath of the Wild is another good example of being nothing like a traditional Zelda game. There’s tons of puzzles to solve, especially with Shrine Quests and Side Quests, but the difference is that the way Nintendo made the open-world aspect of Breath of the Wild was outstanding. Triforce Heroes is the exact opposite. You are confined to very small areas in each level you play with almost entirely puzzle solving to get through each section.
I also recommend avakin life download pc and gacha life online, two of the best free to download life simulator game for PC.

Going to be the reality of a multiplayer focused game though. Like Four Swords.

Please do not link to games in the Google Play store in all of your posts. If you continue to do so, we will start to treat it as spam. Thank you.

I was about to mention I’d bought a cheap copy of the game and I hope to eventually move on to it after playing through Metroid: Federation Force!

But apparently online is region locked - those NoE/NoA/NCL silos were never stronger in 2015, evidently!

Bummer! I never knew that. It’s odd because I play against international players all the time in Mario Kart 8 and then in MK8 Deluxe a few years later.

It is odd, only for Triforce Heroes. Metroid Federation Force, another online co-op game released around the same time, wasn’t region locked for multiplayer.

Mario Tennis Open and Splatoon 2 also featured region-locked multiplayer, so presumably it’s related to the netcode requiring players to be closer to each other physically to reduce latency.

I finished Triforce Heroes today, and I urge anyone interested in checking this game out to assemble a team together to play through this, online region lock be damned.

I was seriously floored by how good this game was. At first I was pretty dismissive - the first couple of areas weren’t up to much, almost like you were going through the motions of a typical top-down Zelda game. But it quickly becomes interesting as the game constantly comes up with fun and devilish challenges that make the most of both the environment design, the combination of items and your ability to form a totem.

This all gives the game unpredictability even when you’re playing with the same group each time, which in turn encourages greater co-operation between you.

The most successful co-op games force you to cooperate constantly while having fun, and Triforce Heroes fits the bill - the fun is in overcoming the challenges as a team, constantly, rather than the social aspects of voice chat while playing through mostly mindless scenes (MMOs are very guilty of this).

I was also impressed by the sheer variety and scope of the game’s sixteen boss fights, more so considering the team at Grezzo hadn’t actually worked on a unique Zelda game before. The lead level designer was involved with the level design on Seiken Densetsu 3, for instance, and the lead boss designer previously worked at Raizing on Bloody Roar.

Gah… really want to assemble a team to play this one.

Hope you manage to find a duo to play it with, it’ll definitely be worth it!

I’m in the US and never played it. If anyone else is new to the game and wants to play then please let me know

I’m still down for this! We just need a third person

Maybe someone on the Discord channels would be game?