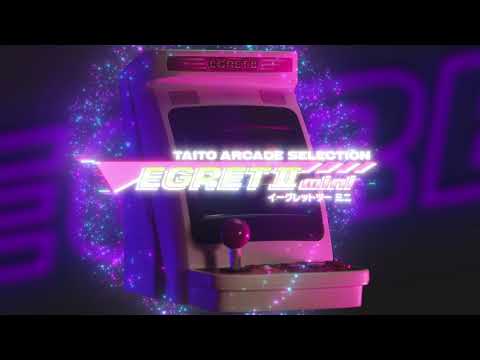 This looks really good and even has the rotating screen the original cab had for TATE games. Plus a trackball? A rotating dial for Arkanoid? I really think it’s neat.

Taito is the most under-celebrated historical arcade company out there. Really glad to see this.

All these minis, there must be more retro enthusiasts than I assume.

I imagine there is a big market for it in Japan more so than in other territories.

I’m actually more excited for this than the Astro City Mini, although I admit this one is much more niche.

Now if this one does well enough, can we get a miniature Darius cabinet with 3 tiny screens?

That would be incredible.

Classic Taito arcade games +built in TATE functionality, yeah I’ll be pre-ordering this for sure, I love my Astro City Mini. Can’t wait to see the rest of the game lineup. Speaking of TATE games, wonder if any Taito distributed Toaplan shmups like Tatsujin/Truxton and Kyukyoku Tiger will make the cut?

There’s also my personal favorite… Rayforce, aka Layer Section, aka Galactic Attack, aka Gunlock (whew…. A game so great they named it 4 times!).

I’d love to see that plus Elevator Action Returns.

Hard agree. I only really started to plumb the depths of Taito’s output in the past two years, and they are such an incredibly consistent company. Even up through the PS2 era, pretty much everything they released was at least a solid 7/10. There’s so much depth in their catalogue, and they consistently hit that sweet spot of being immediately fun to play but hard to master.

It’s going to be really hard for me to hold off on picking this one up, but the sky high price might help. Still holding out for a mini cute cab stuffed full of CPS titles.

Agreed that it looks very impressive, and I was even more pleased to see they have a working hardware prototype to show the screen switching in action, which has me hopeful they’ll deliver something robust by the time it launches next March. My wish on the hardware side is that they put a motion sensor in the rotating screen so it automatically switches to Tate mode and back in software.

On the software side they have to get the image quality right. The Astro City’s very poor image quality (lack of integer scaling and interpolation when unfiltered, along with some of the worst fake scanlines I’ve ever seen) was bad enough that I ended up selling mine despite the hardware being excellent.

Taito released over 100 of their 300+ arcade classics via the four PS2 Taito Memories collections, but the lack of a paddle/trackball controller really held back games like Puchi Carat and Cameltry, so I hope they plan on releasing many titles that take full advantage of the supported controllers here.

btw - does anyone know why Amazon Japan is asking for an absurd 21,000 yen for shipping to Europe? They only wanted 2000 yen for the Astro City Mini I bought. Is it because they don’t know what the weight will be?