I don't "get" After Burner II

I tried to word the title in a way that does not make it look like I’m dumping on a beloved game for attention, but I’ve might ventured too far into “Hello human beings, I hail from Rigel III of the Benzuli Expanse. Can you explain to me this thing you call fun?” territory. Oh well, better the later than the former

Anyway, After Burner II. People fucking love this game. It’s held up as one of Sega’s very best game, a tour de force that demonstrate just how far ahead the company is from its competitors in the arcades. It’s iconic. Its 32X and Saturn ports are often held up as highlights in their respective system libraries, and certainly they’re impressive conversions irrespective of what I think of the underlying games. It spawned a long line of rail shooter and flight combat games from Sega, some of which I enjoy. I’ve seen people laud it while trashing Galaxy Force II, a game I would consider infinitely better-designed and more fun. Beside one weirdo on shmupfarms, I’ve never seen anyone actively dump on it. After Burner II is, by all metrics, a Beloved Game.

I can sort of enjoy the 3DS port’s “Special mode” which radically overhauls the game to ressemble AFB Climax (which I actually quite like), but otherwise I don’t like After Burner II. I own it on Saturn, I’ve played multiple versions of it with a variety of inputs devices of varying degrees of faithfulness to its arcade setup, but every time I play it, I find a twisted, frustrating game that actively punishes me for trying to play it. I do not understand why anyone enjoy it outside of its soundtrack and production values.

-The controls are fucking weird. It tries to be sort of realistic by having the plane sort-of-bank instead of moving and recentering as in most rail shooters, but it’s clearly not a realistic flight simulator either. The result is that it’s fiddly to paint targets (not helped by the inconsistent nature of the missle lock-on) and banking sideways to avoid enemies or target enemies feels like you’re running into place, like you’re barely moving.

-Visibility is an huge issue. Your F-14 is fairly big and the way enemies spawn in front of you and launch missiles means it will inevitably cover projectiles until it’s too late. Very not helping are the overdone, blinding contrails from your own missiles. What am I supposed to do, not shoot enemies?

-The barrel roll. Basically when you pull the stick left and then immediately right (or vice-versa), the game takes control away to have your F-14 do this shitty stupid barrel roll that’s mostly useful for dying. It’s some twisted shit - fidly to do on purpose, but easy to trigger on accident. I’ve seen one claim that it makes you invincible but while it might potentially niche use in avoid more tracked missilles, this seems horseshit - there are plenty of times where I ate a missile in the middle of the animation and blew up.

I thought maybe, I’m looking at it wrong, that After Burner II isn’t really meant to be played like a normal video game as much as it’s a 2 minutes thrill ride where you get into the fancy hydraulic cabinet, enjoy some cheap thrills while you get jostled around, and walk away satisfied you got your 2 minutes of good graphics and explosions. But, Sega’s own Galaxy Force II is also a motion cabinet game, and certainly I enjoy that game outside that context. And I’ve seen people praise After Burner II specifically in the context of home play - and obviously the Genesis cartridge didn’t come with its own hydraulic seat.

Maybe my impressions will ring as stupid and uninformed to experts. Maybe they are. I used to have a similar view of Space Harrier, but eventually that game just sort of clicked and I like it now! I do find it has some serious issues that make the universal, uncritical appraisal of it confusing but I see why people think it’s a good game. And I’m hoping, that perhaps, I’ll have a similar Eureka moment that’ll let me enjoy AFBII as well.

So, fine denizens of RGB, I have to ask you: is there some trick, some mindset, some secret sauce necessary to click with AFBII?

You learn the quirks of the visuals/controls and then almost ‘swipe’ past enemies to lock on, while spending your time dodging and rolling away from enemy missiles.

Some of the enjoyment is lost a little compared to the arcade cab imo, something about the shaking and loud sound that just really made it even more immersive. Especially the roll and shaking when crashing and being hit, is a little lost sitting at home.

That said, it’s a very fun and iconic Sega game of it’s time, like @D.Lo said it has that Top Gun vibe, basically being the game for the movie without being licensed. 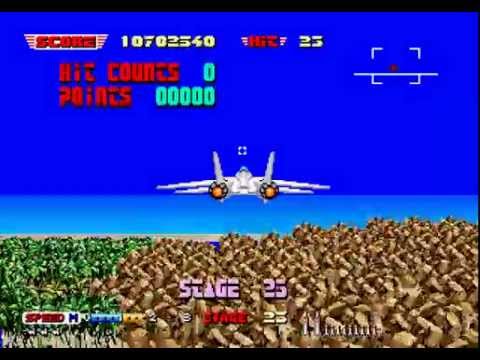 Wouldn’t this make it kinda like Rez? You “draw” the attack you want as long as you can to make a very long string, then release? Meanwhile avoiding any projectiles coming your way, or targetting them too?

One thing I’ve found with ABII is that I appreciate it way more in the arcade format. I think the game was tuned best to be played there. That’s not to say I don’t enjoy it at home… because I do… but I feel like the precision was better in the arcades.

Have to admit this is how I feel about the game as well. But unlike Space Harrier I never did get to try it at the arcade. I found Sega and M2’s G-Loc Switch port to be more enjoyable than 3DS After Burner II with home controls.

I’ve not played After Burner II, but I’ll try it soon.