My Arcade® is led by passionate life long gamers who understand exactly what retro lovers want.

I have the mini arcade cabs from these guys for Dig Dug and Mappy, they’re very high quality but one downside is pretty much all of the My Arcade units are using NES roms (not that the NES ports are bad per se).

Came here to ask if they were NES.

But have to say these things are simply gorgeous. Bubble Bobble is the NES game (I’m definitely getting the mini arcade cab for that), guessing Don Doko Don and Chack ‘N Pop are likely arcade? There was in interview in the last issue of Retro Gamer with the head of Micro Games and he said the reason they usually use NES roms is “arcade versions would raise the cost of the units” (he didn’t elaborate as to why, if licensing or costlier emulation, ect).

Here are my Dig Dug and Mappy My Arcade mini cabs and a couple of short videos I took a few months ago showing some gameplay. I really like the build on these, they’re very sturdy and look really nice on a shelf with gorgeous, bright recreations of the cabinet art. I also love that the power buttons are the “coin slots.” If it weren’t for using NES roms they’d be pretty much perfect. The packaging is also really nice: 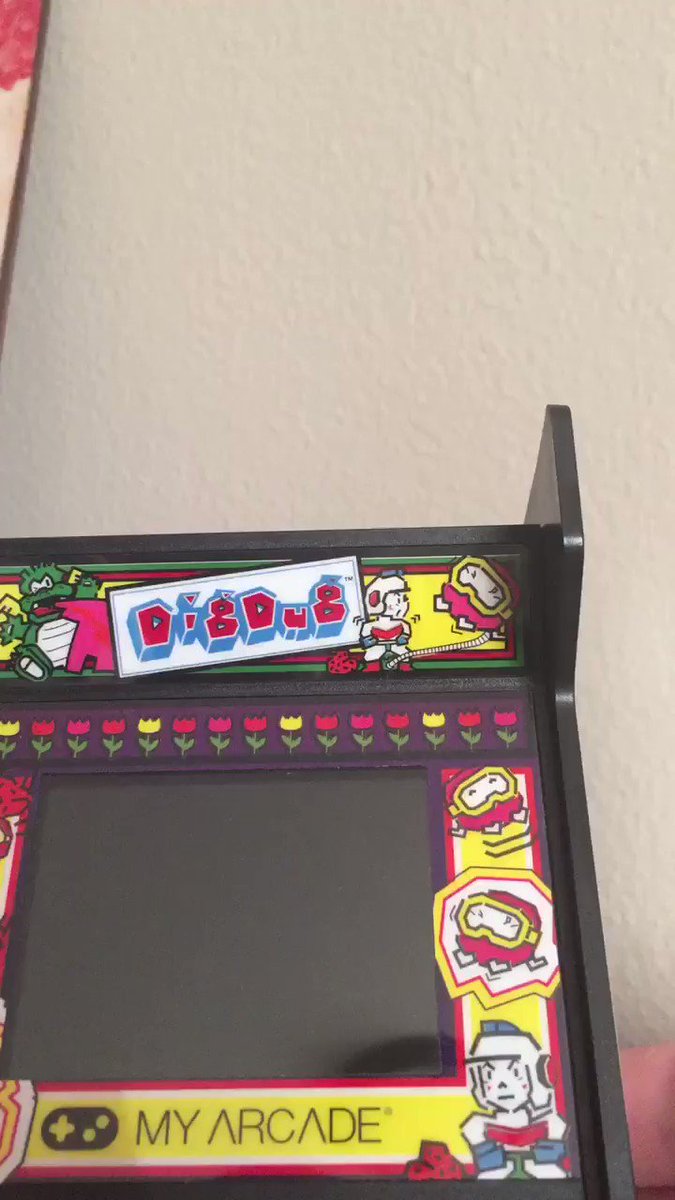 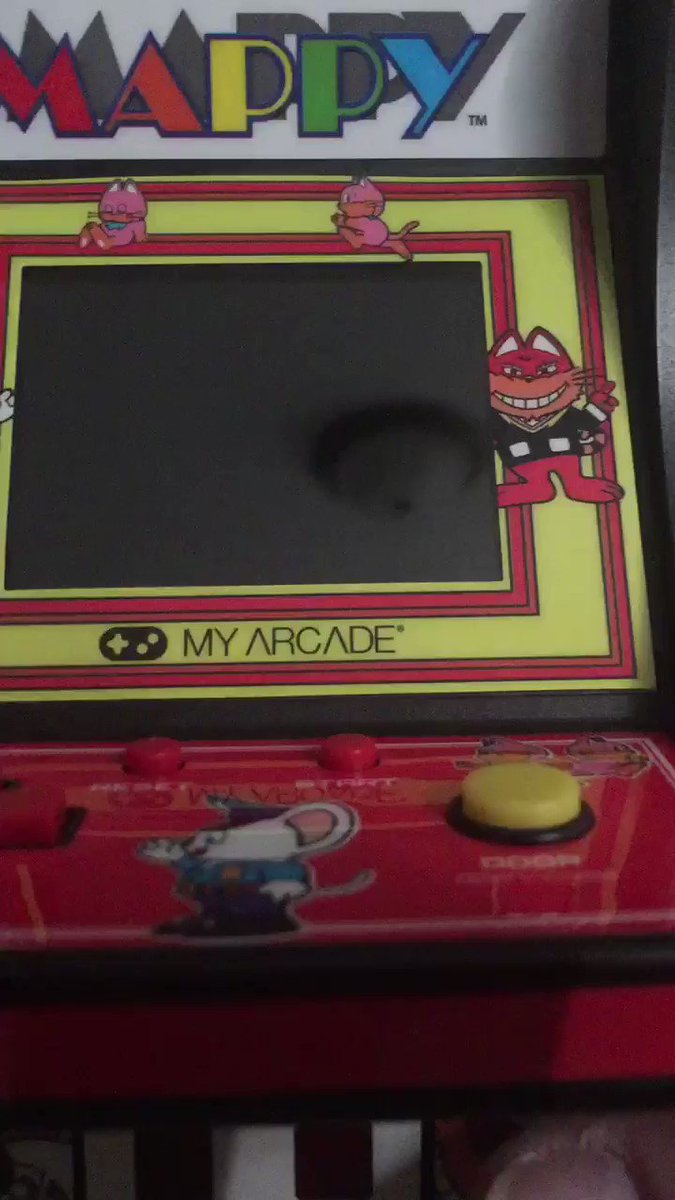 Just can’t justify it with NES ROMs. That smacks of cheaping out in a bad way

Your post reminds me how amazing it was when systems from NES to Dreamcast were sold on the promise of Arcade visuals in your home at the time.

Now, it’s so different. It’s “your games will look like this raytracing proof of concept Epic Games came up with a few years ago.”

I wish they still made arcade games with next gen internals that came from the most talented developers.

I’d be surprised if any of these aren’t NES ROMs.

I fancy the yellow bubble bobble one, but I probably won’t buy one. Ha!

I loved that era when bringing the arcade home was what we all wanted. It’s a big reason why @Yakumo’s Battle of the Ports is so much fun to watch and see all the shortcuts, changes, and compromises.

I’m very glad I lived it.

Right, those games aren’t on comparatively next gen hardware though. And they aren’t made by the likes of the best developers in the industry. They’re more the “b-team” of big time developers. Still talented, but not innovating in the same way that, say Donkey Kong, Virtual On, Street Fighter II or Virtua Racing did. Every year until the Dreamcast launched, arcade games blew our minds.

This is so true and the hardware was so relatively uncompromising for its time that we are still hunting and hoping for arcade-perfect ports to consoles decades later.

And the one console with genuine arcade hardware built in, the Neo Geo AVS, is literally the most sought-after system to collect for in the history of the industry. And the most expensive for its time too. And it will always remain that way. Nothing will be so clearly over powered like that compared to its peers in a console again.

Heck, the subsequent generation of systems still didn’t fully compare to what was possible on the NEO GEO with, perhaps. The small exception of the Saturn with ram expansion. Not sure if that was as powerful, but the PS1 and N64 certainly weren’t in Neo Geo’s league.

I loved that era when bringing the arcade home was what we all wanted. It’s a big reason why @Yakumo’s Battle of the Ports is so much fun to watch and see all the shortcuts, changes, and compromises.

Yup, and now they cash in on repeated sales of crappy little handhelds and toys instead. (Sorry thread)

Yup, and now they cash in on repeated sales of crappy little handhelds and toys instead. (Sorry thread)

I don’t have a problem with that. The era couldn’t last forever and there’s nothing wrong with trying to make a buck using nostalgia as a selling point.

Sega Saturn’s 2D capabilities were likely on par with the Neo or better, but unfortunately for all of us there was an industry shift to 3D that came on like gangbusters with the release of PlayStation and the arcade hardware of the time having some incredible 3D masterpieces like Daytona, Sega Rally, Virtua Fighter, and Ridge Racer. The games that really utilize the hardware of Saturn well in all its 2D glory are fantastic. It just looked “old” to people at the time.

Hell, pick up an issue of Next Generation magazine from that time. They were routinely savaging everything 2D (and I’m guessing Edge was too) because it was considered the past. They were games from a bygone era as far as that magazine was concerned, and that definitely bled over into the “influencers” of the time, gamers who were buying the latest and greatest on day one.

I was definitely an outlier at the time, as I recall many peers who were so enamored of 3D it was all they would play. It really was the beginning of the end for the arcades because you knew that what was appearing at home was now nearly on par with what they were building for arcades. Gaming lost its first-run movie theatre-like debuts and was moving quickly toward home games only.

I guess I’m just the wrong target audience. The last thing I would want to do is play a game on one of those mini arcade games, so it would just sit and collect dust for eternity.

There are far better methods to playing the old classics imo

I’m certainly not the target audience. But I’m fine with companies selling these to kids on the cheap and to collectors who are into them.

Hell, pick up an issue of Next Generation magazine from that time. They were routinely savaging everything 2D (and I’m guessing Edge was too) because it was considered the past. They were games from a bygone era as far as that magazine was concerned, and that definitely bled over into the “influencers” of the time, gamers who were buying the latest and greatest on day one.

Those monsters. I remember still digging 2D games even as a teenager. I always loved my 8 and 16 bit games, and when I was able to get my hand on 2D 32 bit games, I loved them. The few I remember most that I got when they were new were Yoshi’s Story, Marvel VS. Capcom, and Legend of Mana.

Oh, and all sorts of GBA games. I freaking loved that system.

I need to dig out my back issues of Next Gen. I think a lot of people have no idea how influential they and Edge were during that time. The Internet was a thing by then so we were definitely talking about games from very specific angles already in 1995 and Next Generation’s take was always important. rec.games.video.sega, sony and nintendo were vibrant places with lots of discussion. Many of those same people migrated to GAF… the OG GAF… myself included.

Magazines were the starting point for all of us back then so it shaped your opinion depending on what you read. Gamepro was more kid oriented and silly. EGM was somewhere in the middle. Diehard Game Fan blew me away with its love for the same kinds of games I adored at the time. And of course Next Generation was the hoity toity industry insidery mag based on Edge which was really hard to come by in the States in that era.