Anyone have any nostalgia for these?? 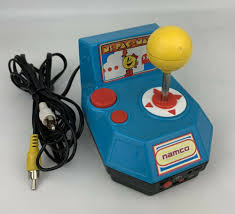 I’ve been playing Galaga on this sucker with a friend, it stores high scores and has a cute clicky joystick. We’re plugged into a 13 inch CRT so it looks good with the included composite plug.

Now, part of me thinks this is almost the antithesis of this board!! But I’m also under the impression that a lot of these run NES/Famiclone roms and that is pretty cool!!

I plan on grabbing a few of these off ebay and goofing around. I know Namco always cranks their games out on these type things… does anyone have any favorite plug and plays??

(For clarity, I am not talking about “mini consoles” that output HDMI!! Composite only!)

If we already have a good plug n play thread and I missed it please link me!

Not really for those, but I did want to get a couple to help ‘complete’ some series collections like Double Dragon. 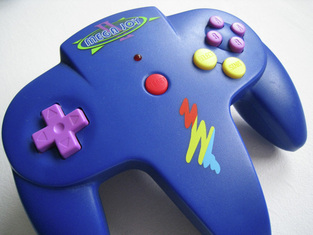 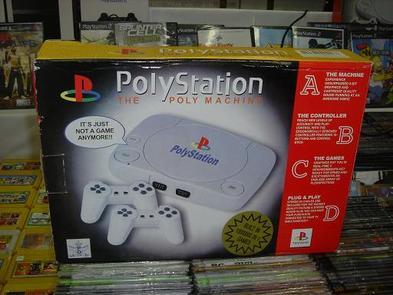 A good friend of mine owned that exact same Ms. Pac Man plug and play joystick, it was absolutely awesome and had a great selection of Namco games. Plus, the joystick twists for when you play Pole Position which was a really tight little mechanic to include.

Nice, I used to own its predecessor back in the day. 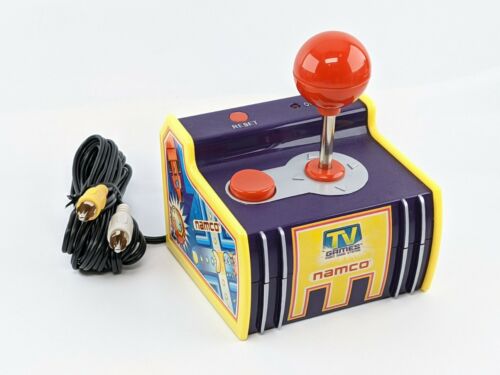 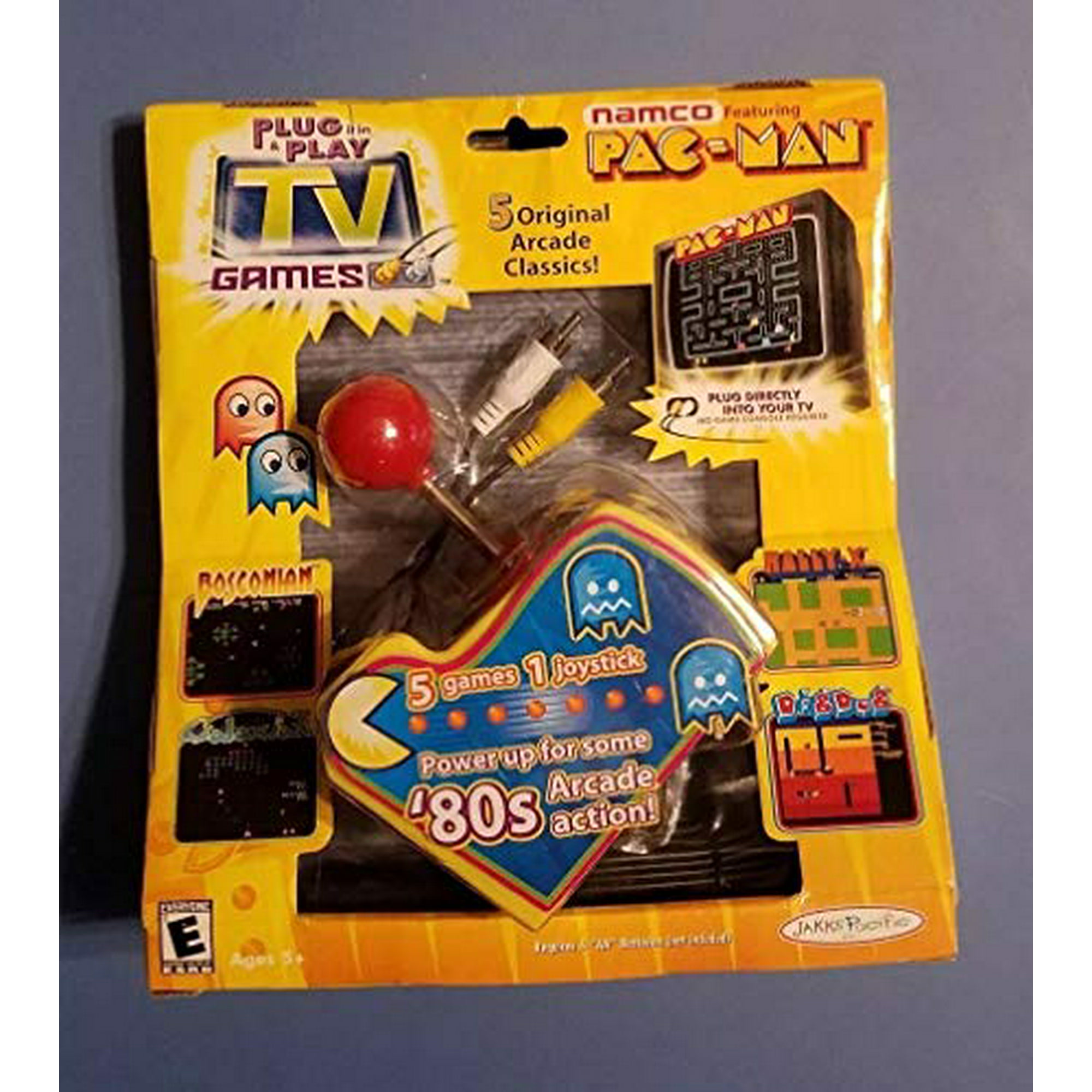 I mainly played Bosconian on it. Fun, but rather tricky since diagonal movement wasn’t possible due to the joystick’s four-way controls. Also, the game lacked the arcade original’s speech.

One thing I didn’t like about those particular models was the placement of the action button/s to the left of the joystick.

Yeah, it’s a bit awkward. I wonder why they did that.

This weird Master System stick I used to have is also oriented like that.

Not to mention the basic Atari joystick pad.

It’s too bad the Master System stick has that layout, it looks pretty cool otherwise.

I think someone built a cabinet around this one! 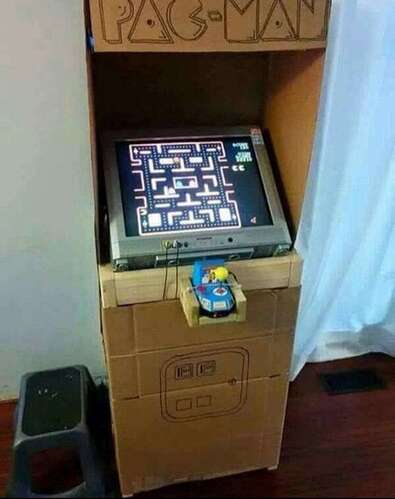 I had a Famicom one that was shaped like an N64 controller and it had the worst fitting battery pack I’ve ever encountered.

It was the cheapest way I could find to play Binary Land back in the day.

Their reliance on composite means I wouldn’t play them today.

Yeah, they’re all taking after the Atari pad.

Most early games considered movement the ‘main’ control. Pong, breakout etc didn’t even have a ‘fire’ button, that really only came in with Space Invaders which was released after the VCS was already out.

So the stick was designed around the right hand controlling movement since most people are right handed.

I think Sega had a few of those too in the 2000s, Mega Drive related.

All this talk about the orientation of the joystick and the buttons had me wondering what exactly the deciding factor was for ultimately putting the stick on the left side.

First, to find out how things started, I wanted to know which game was the first to feature both a stick and buttons.

Apparently, Sega’s electro-mechanical arcade game Missile (1969) was the first game to be controlled with both a stick and buttons. 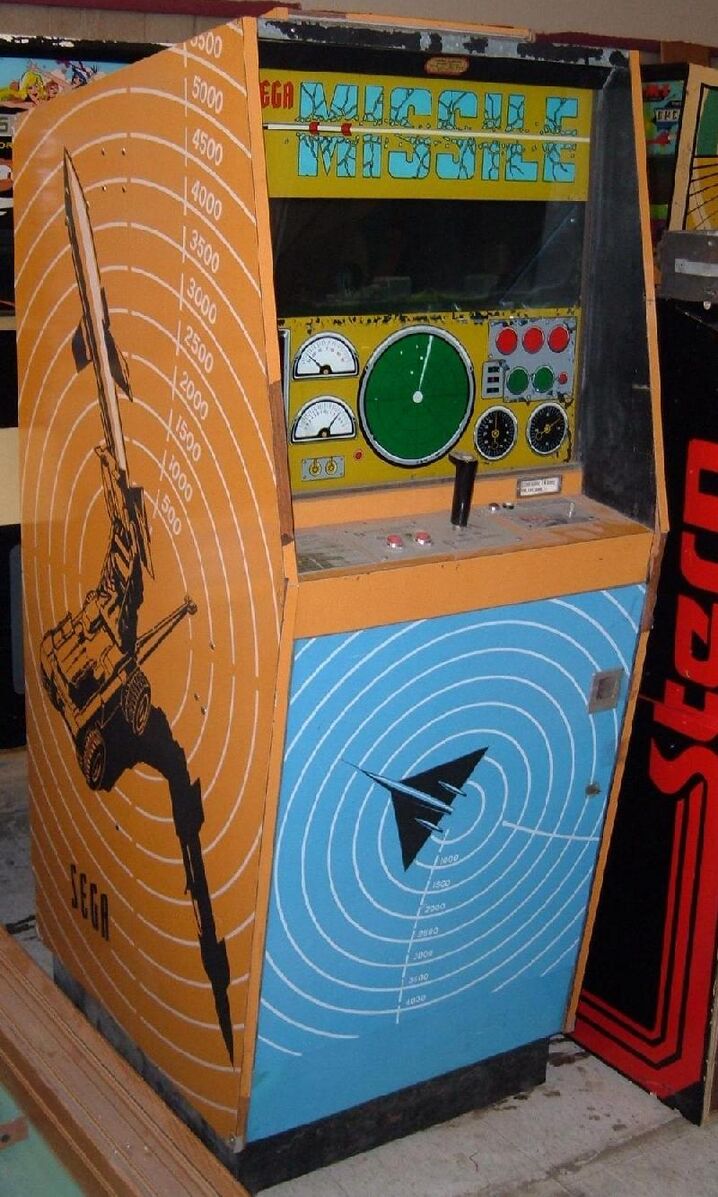 So, buttons left, stick right, as you can plainly see here.

The player moves a small motorized tank left and right via two buttons (left and right) which moves the motorized launcher, and then fires ahead of the incoming missiles. Once the missile is launched, the missile can be slightly steered into the oncoming planes (“flight control”) by moving the joystick left or right. 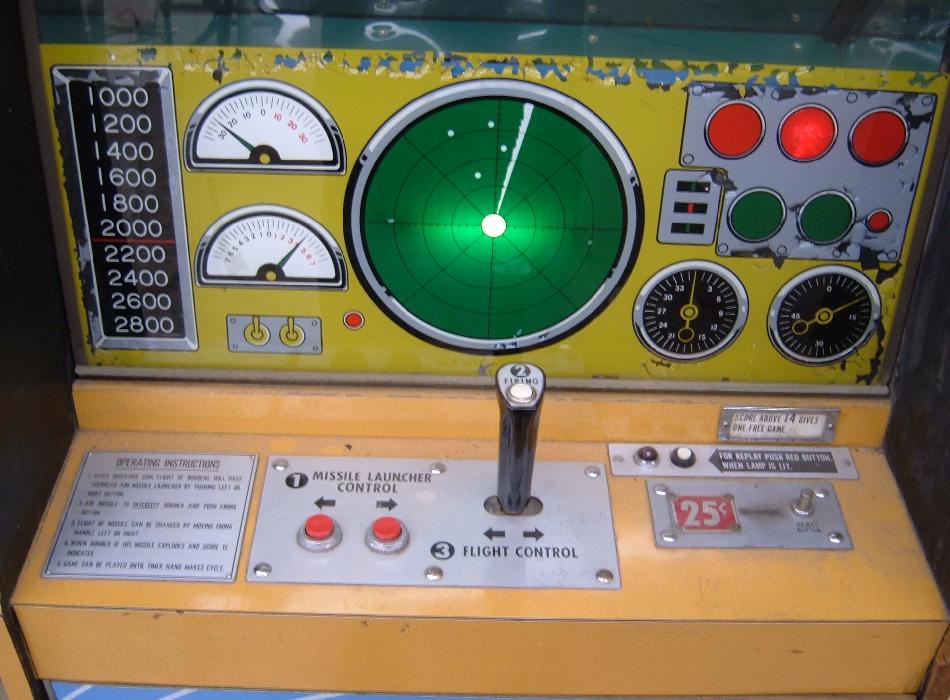 So, even back then it made the most sense (to Sega, at least) to have the controls for player movement on the left. On the other hand (pun not intended), perhaps they thought steering the missile required more precision than controlling the tank, so the dominant hand would be better suited for that specific task. This is all just speculation, though.

Then, my search took me to this Nintendo Life article: 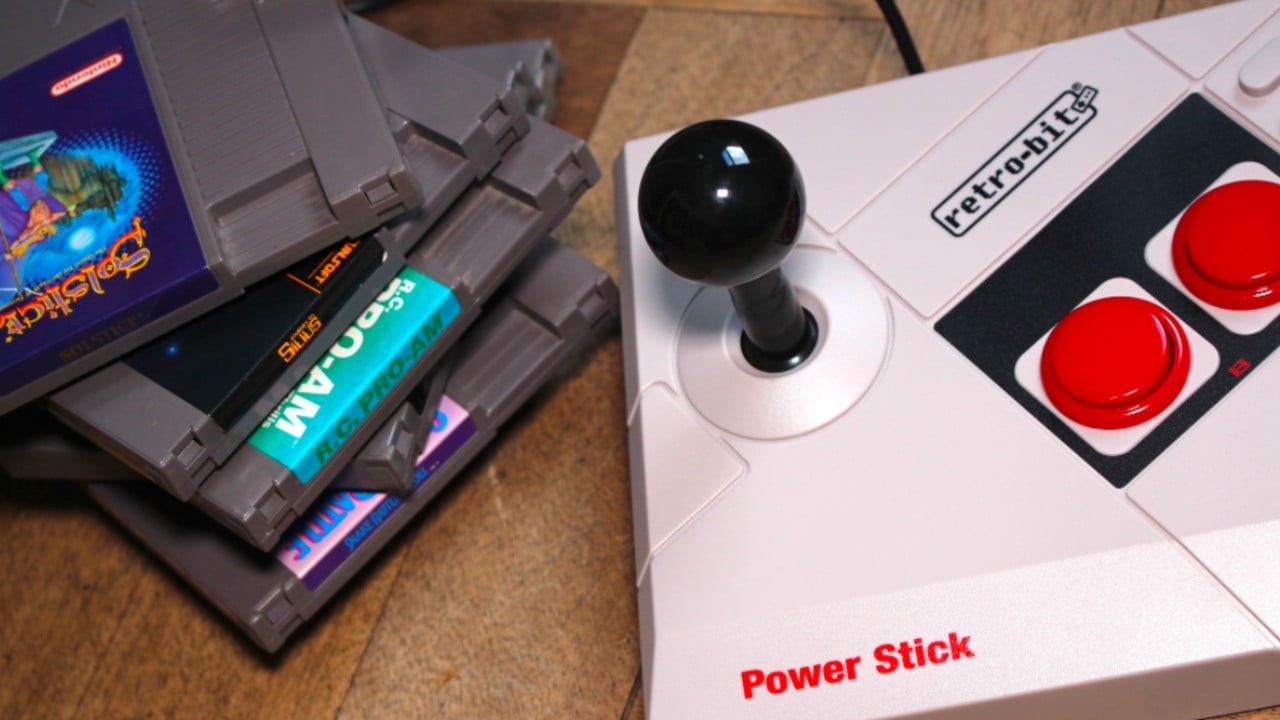 Video: Ever Wondered Why Joysticks Are Always On The Left?

It's probably not why you think, either...

So why did things get switched around? According to Larry Bundy, it was because of declining revenues in the arcade sector. Keen to keep their coin-op units as profitable as possible, some canny arcade operators switched the controls around, placing the stick on the left and the buttons on the right. This move was seen as a way of increasing difficulty, and because it was incorporated into the design of the JAMMA arcade standard, it quickly became accepted as the norm. It was also around this time that home consoles like the Famicom (1983) used this setup; even the handheld Game & Watch series, which featured the world’s first D-Pad, placed it on the (you guessed it) left-hand side of the system.

What do you guys make of this? Honestly, I think it sounds a bit iffy (and where’s the proof?), but who knows, perhaps there’s some truth to it. What’s funny though is that the Jakks Pacific sticks make an appearance in the video the article links to.

I took a dive in the comments section of that article and found a comment worth quoting (edited for length):

That might all be true but here’s some logic on my part: If most games have you moving from left to right (and they do), or standing on the left primarily (usually you start as the left player in a fighting game in single player mode for example), then it just makes sense for the stick to be on the left and the buttons on the right because that reflects the same way your movement to actions works: You move your character on the left of the screen to the right and his gun usually fires to the right, or his sword swipes to the right, or whatever; so I think it would feel back to front to have the stick on the left and action/fire buttons on the right in most games. Your left hand is usually more clumsy and less precisely controlled than your right, so you’d want to have the most complex actions and especially things that require rapid button pressing to be assigned to your right hand. I guarantee most people can press a button rapidly much faster with their right index finger than their left, which a lot of old arcade-style games, especially shmups often required. So this is another reason why the stick being on the left and buttons on the right just makes sense.

Yeah, that pretty much sums up my thoughts about this.

All in all, I think it’s fascinating to see the humble beginnings and subsequent evolution of certain elements we usually take for granted in this wonderful hobby of ours.

It does sound iffy.

Space Invaders, the most popular game of all time to that point, had movement on the left (via buttons) in 1978.

The JAMMA Standard was introduced in 1985, years after pre-Jamma Space Invasders and Donkey Kong sold millions. The Donkey Kong Game & Watch introduced the dpad in 1982 on the left, probably the first consumer device? And the Famicom pre-dates the JAMMA standard by two years too.

When movement became the item that requited less precision than firing, it made sense to put the movement on the left and firing on the right.

I’ve got one of these as a decorative piece on my collection. It’s horrific to use, though…

it was incorporated into the design of the JAMMA arcade standard

Right, that makes the claims of that Larry Bundy fellow even more questionable!

Like if you want to plug your game into a cab that originally came with Ghouls and Ghosts and had a JAMMA connector?

The west was just behind I reckon. The Guantlet arcade cab still had left hand buttons in 1985. 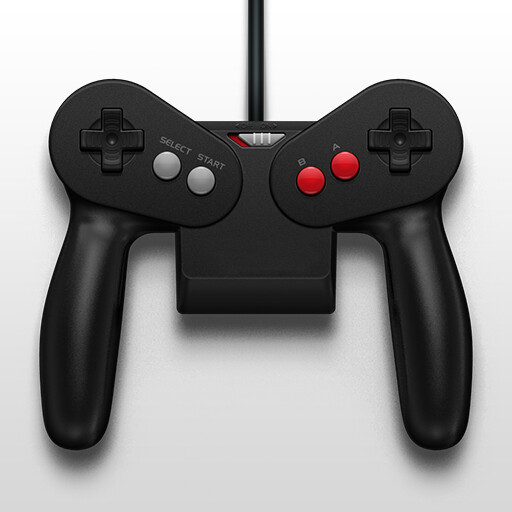 I’d like to get the Golden Tee ones going cause I
have gotten more into GT lately both the old and new ones but the plug and plays I can’t seem to get them working / aren’t yet compatible with MAME, but I’d prefer not to be stuck on composite lol if I could lol.

I have a few of these systems… never bothered to open the Atari one though, as I have a decent selection of 2600 carts.

The light gun one is pretty crappy but somehow still fun.

The SpongeBob one is just junk mostly, but my kid enjoyed it when he was 4 or so.