This collection of Famicom titles just launched in Japan yesterday. Namco appears to have done a Taito Memories and is releasing different versions of the game depending on the region.

South East Asia gets Namcot Collection on Switch, which contains a contemporary front-end where you can place each game on your shelf, with accompanying acrylic stands available to show off:

There are three DLC catalogues with 10 games each, you get Wagyan Land to begin with. Buying the boxed physical edition gets you all games from catalogue one, alongside a bonus: M2’s Famicom remake of Pac-Man Championship Edition. Here’s the full lineup: https://nc.bn-ent.net/title-lineup/dlc01.php

For the rest of the world it’s been adapted into two standalone ‘Volume’ releases available on more formats (PC, PS4, Xbox and Switch), as Namco Museum Archives, each containing a selection of NES titles instead. The shelf front-end has been dropped in favour of a more utilitarian menu system: 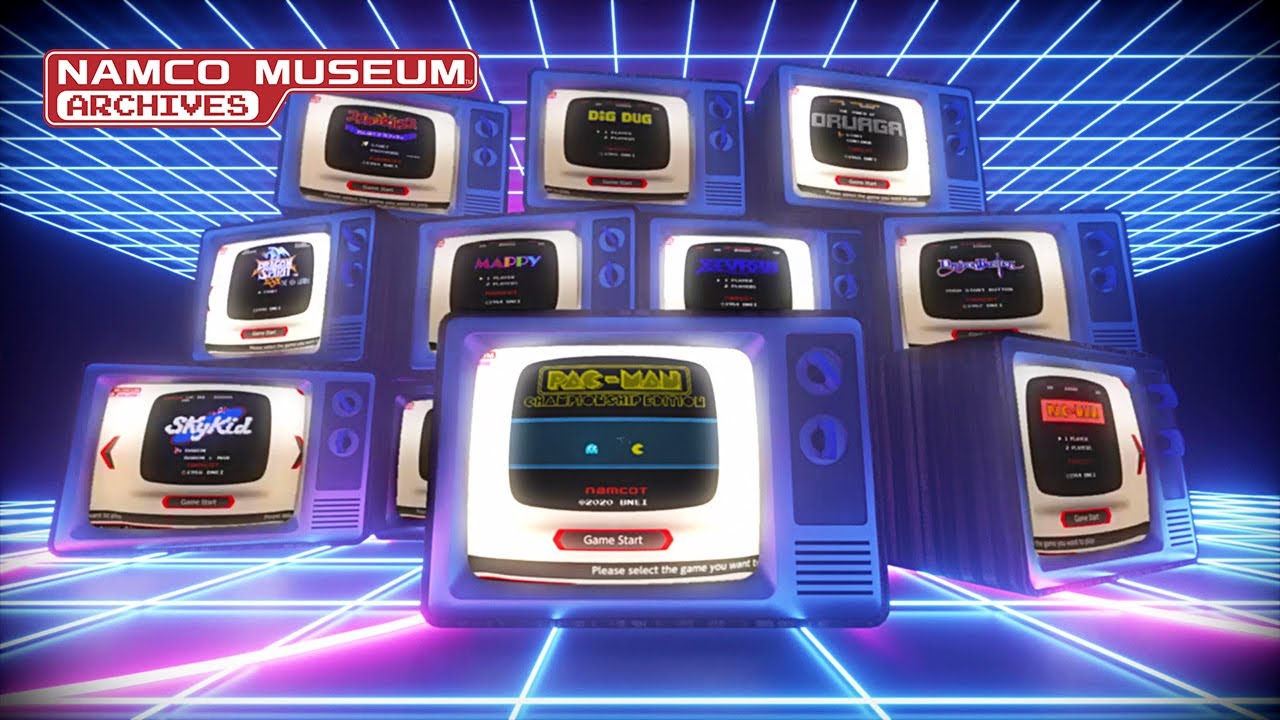 I’ve got the boxed version of Namcot Collection on the way, so in the meantime I’ve only tried the free-to-start downloadable game with Wagyan Land. Going from the staff credits, M2 was behind the vast majority of this collection and it shows - this very much feels like a reskinned version of the PC Engine Mini’s front-end, right down to the layout of the menus and options you get when pausing a game.

This means that despite the more capable hardware targets the vintage filter from the Sega Ages game isn’t included, and there’s a bit of input lag, at least in the menus which feel sticky to navigate. But at 300 yen per game (excluding tax), and four platform targets like with the Konami collections, time and budget were probably limiting factors here. But despite having been built with the Unity Engine Gotch Technology Corp’s Namco Museum (2017, Switch) is a more polished and well-rounded package.

Is anyone else thinking of trying this? I haven’t had much exposure to Namco’s Famicom catalogue, ports included, so I’m mostly interested in playing the games as a history piece. What games do you think are most worth checking out?

My copy finally arrived so I started digging into some of the games, starting with Dragon Spirit.

And wow, this is an impressive conversion! The new sprite work manages to convey the original visuals effectively while making up for the lack of backgrounds in some areas, and like @GraveyardDuck I prefer the soundtrack to the PC Engine conversion. Really admirable stuff - was surprised the cut content in PC Engine wasn’t cut on Famicom.

As for the game itself, the level design continues to be a treat, every area’s design perfectly reflected its visual appearance, with some great gimmicks like the insect nests in area 3 to the vanishing light in area 7. The powerup system felt well pitched as well, dying sets you back but you’re always afforded an opportunity to be competitive again. Bosses become trivially easy when your shot type and speed are maxed out, though.

Dragon Spirit is really cool but, like most shmups, I’m really bad at it.

I absolutely HAVE to play the Pac-Man CE de-make in this collection.

It’s really good! Bit of audio lag though, I’m not sure if that’s intentional or M2’s emulation, the other games on the collection seem fine.

DLC packs 2 and 3 have been announced for this month:

Some of the games have already been released for the western adaptations (Namco Museum) but many are new. I’ll post a list when I’m not on mobile!

It’s been ripped and works on original hardware. I’d love to get my hands on a repro cart for this.

Reports are that it was a homebrew game that M2 put the finishing touches to (not much by the looks of things).

Of course they have tried to erase all references to the original homebrew version from existence. There were only ever videos of it, no ROM or patch, but still…

@matt @Peltz
Yeah, I thought this was weird: https://www.siliconera.com/pac-man-championship-edition-demake-started-out-as-a-3ds-game/

Since M2 at the time weren’t speaking of the game’s origins I found it hard to believe Namco would have commissioned it for 3DS. The 3DS already received a 3D port of Pac Man CE in the launch window as part of Pac-Man and Galaga Dimensions, complete with online leaderboard support.

Finished Splatterhouse: Wanpaku Graffiti. Another must-play Famicom title without any fluff to it, they get a tonne of mileage out of what initial feels like a simple side scroller, but the set pieces are extremely inventive.

The game is surprisingly lenient with its secret ending. There are two crystal balls in hidden stages (both feature extremely offbeat settings so you’ll know them when you find them) but even though I ran out of continues after the first, forcing a password start, the game still remembers you collected it.

Never heard of this 3DS game. Just checked out the trailer on the eShop. Will have track down a copy of this.

I had the cartridge for that years back, I loved the little hard case the “Namcot” games came in on famicom. Would like to get it again but am afraid to look up the price now.

Oh wow, would love to have it on Famicom as well one day, so many great pick up and play titles without an ounce of fluff to them. I can see why @D.Lo has hundreds of Famicom games.

Never heard of this 3DS game. Just checked out the trailer on the eShop. Will have track down a copy of this.

If you get it definitely try Pac-Man Tilt, it’s a sidescroller that incorporates gyro controls to manipulate the physics and momentum of objects and Pac-Man himself. It’s almost like a more involved, slower paced Sonic game.

Unfortunately there aren’t any credits but Sonic co-creator Hirokazu Yasuhara might have worked on it! He was at Namco during the game’s development period before joining Nintendo Software Technology to design Mario and Donkey Kong: Minis on the Move.

Only reason I had it was because of the cute little box, literally just big enough to fit the cartridge in (which was also an odd shape), that a bunch of the old Namcot games came in. Ended up getting stolen and I never went and got a new one.

That reminds me, one of the cool things in the Namcot Collection, which was inexplicably taken out in the western release, is how the designers bothered to display the original packaging of the games on your virtual shelf, both when stood upright and slotted in to only show their spines. When you boot a game you see the cartridge slide out of its respective packaging - really neat.

I just made an offer on eBay for a copy. I adore Pac-Man CE and would love to have a portable version. Does it include subtle 3D effects? Assume it does since it’s an early 3DS game. That would be cool. The tilt game looks neat. Would also like to have Galaga Legions as well. Never bought that one on console.

The 3D is pretty good on it, yeah. Only downside is the assets are clearly downscaled from the original game rather than designed from the ground-up for 240p, but it’s not a deal breaker by any means. People are still playing it online going from the ‘weekly’ leaderboards last time I checked a couple of months ago!

The other game I’ve been playing in this collection is Quinty (Mendel Palace in America), Game Freak’s first ever game.

I’ve played other non-Pokémon Game Freak games before, but since those games came long after the first Pokémon it was hard to really connect any dots to those late 90s games that made the company so successful.

But Quinty certainly bears fingerprints all over of the original, smaller team that went on to make Pokémon. The art and spritework is undeniably Ken Sugimori’s, the soundtrack is undeniably Junichi Masuda’s style, and there are echoes of Pokémon in the character movement style chosen by designer Satoshi Tajiri, and the eight palaces (gyms?) of traps that feature.

The game itself is deceptively simple in true arcade fashion. You walk around a tiled room, dispatching baddies by sliding them off into walls. That’s easier said than done - press the A button on a tile in front of you and off they go sliding. But only if they are standing on that tile in the first place. Each world contains different enemy types - some which are infuriating to deal with - and each level has a different combination of tiles and special tile with bonus effects.

It’s a challenging game and the designers know this, since it gives you unlimited continues and you’re free to switch worlds whenever you like, your progress saved between them. I’ve so far dispatched six of the eight bosses, but I’m completely stumped on the latter stages of the remaining two worlds.

You know what? I got this game in a random lot and never played it. I’m going to go ahead and rectify that.