Original XBOX Component output is a bit dark - any solutions?

I’m using the same 1st party Component cables as I always have (the HD , but used to play mostly on a flatscreen where I probably pumped up the contrast and brightness to compensate back in the early 2000s. Since then, my XBOX broke and I haven’t played it much since.

I recently picked up an early unit (one of the ones that successfully does 480p for Smilebit games) but now I can see the image is quite dark. The sharpness is great, but I’m going to need to adjust my CRT to compensate - something I prefer to avoid doing every time I play XBOX.

Here are the cables I’m using:

I believe these are early-gen 1st party Component cables. Would going with different cables help the situation?

The OG Xbox and 360 have a darker default gamma curve which crushes blacks, outside of manual adjustment there I don’t think there is much you can do about it I’m afraid.

Interesting. I wonder why they made them like that.

Thanks for the info. How should I set up my Xbox 360 settings? There’s Standard, Intermediate, and Extended (if I remember correctly) but they each always seemed a bit “off”.

Kind of crazy that Microsoft let these consoles ship with colors so off like this.

As long as you have the HDMI channel match the range then they will look the same. As far as I can tell Intermediate is some weird middle ground that I can’t work out the use for or understand it being available.

I have seen it speculated they chose a darker black to make the colours pop more, it’s certainly an odd quirk to their hardware.

I have the exact same problem. I tried RGB SCART first and I couldn’t even see where I was walking in Halo. Component is at least visible but not hugely better. I must have tried at least 10 different cables, so I’m inclined to agree it’s just how the Xbox is.

I just turn up the brightness on my PVM when I play OG xbox games. I’m using an original HD AV pack on a 1.6 model which has a different video encoder though.

Huh, I guess I have this same problem with my Xbox and OSSC as well… but at first I thought it was my Wii that was too bright. It’s possible that it’s just my Xbox is too dark!

Had to keep messing with the OSSC settings every time I switched consoles, and I hated that. Could never remember which setting I saved it to.

I have the same problem. I tried playing Splinter Cell on my OG Xbox which is connected to a PC CRT via a mayflash transcoder & I thought the same. I tried adjusting the contrast/brightness but couldn’t get much improvement. I tried the same game on a 15khz monitor via RGB & it was much better but I want to play in 480P

Im going to try adjusting the screen pot on the flyback on the PC monitor to raise the contrast, perhaps this will help.

I have my xbox connected to my ossc through to a vga monitor and it doesnt look dark at all. It’s a 1.6 crystal xbox if that matters.

OSSC has some pre adc gain controls that can help with brightness if that is useful to anyone.

Glad it’s not just me. Is there any way to save video profile settings on a PVM 20L5? I’d prefer not to recalibrate every time.

Also, would you turn up brightness or contrast too?

I don’t think you can - unless you have a BKM-129x (or clone) as if it is set to YPbPr you can make changes that only affect that input.

My 20L2 uses the same card but it has the brightness knob on the front so I calibrated a nice middle ground and I just turn it up slightly by hand for some consoles and then bring it back to centre once I’m done.

The issue seems to be playing a 480p signal through component video on a crt.

What I find annoying is when playing in 480p (xbox or ps2) some cutscenes that are not in engine are brighter than the actual game ? . This may be explained that the FMVs are 480i or something.

Anyways , another issue I have found is that xbox produces a lower audio volume in comparison to the ps2 . I’m not sure if it’s the xbox2wii pro adapter+ hd retrovision cables that I’m using, or form the xbox its self. ( I have tried direct av cables and the audio volume still lower than ps2.

Interesting. So you aren’t having the issue at 480i? I have to give that a shot.

Regarding ps2, I don’t think I have a single 480p game on that system to test with

Also, welcome to the community.

Also I don’t feel like OG Xbox is dark to me with component, though I am using a custom component xbox cable that is basically a Xbox 360 component cable with an OG Xbox end like this one: 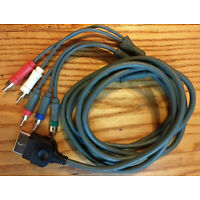 Plus going through an OSSC as well.

I’ve got the official HD AV pack and I don’t think it’s dark - that said I tend to adjust the brightness on my PVM per console and I have no experience hooking it up to a flat panel.

I’ll check myself, though I have an unmodded PAL Xbox with the disgusting blur filter on 480i and no 480p available… Man they wrecked it here…

Yeah I’m in the same boat and man once you switch off that flicker filter it’s like a whole new console.

Edit 2: And I had the same issue with my Xbox at 480i over component

Hello I wanted to make this reply in hopes you read it, on my 20L5 I was getting extreme black crush, and found what the issue was. In the 20L5 menu, go to your composite settings and change it from BETA 7.5 to another preset, this removes the black crush entirely.