Playing GBC and early GBA games on a backlit screen looks... wrong. Am I alone?

Oddly enough, I don’t feel this way about original Game Boy games due to their monochromatic graphics. Backlighting doesn’t ruin them.

But it does seem like the gamma levels for GBC games are genuinely tailored around the GBC screen. Even playing it on a front-lit GBA SP ags001 looks wrong because of the different calibration that screen has.

On a GBA SP AGS-101 backlit model, however, GBC games look completely off. The screen has far more ghosting than the original GBC (which had no ghosting at all) certain colors like reds and blues that were once nice pastels become an over-saturated mess on a backlit screen.

Even playing these games on my holy grail setup is kind of hard on the eyes. Playing on a GB Player + GCN + Component Cables + GBI ULL on a PVM20L5 produces visuals that are beatiful, but too deep in terms of color and contrast. Let’s compare: 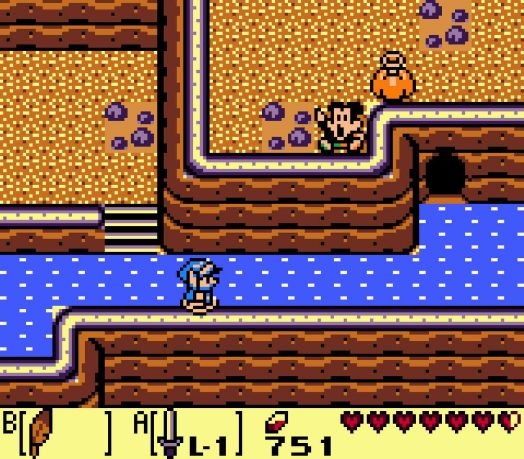 So, yea, it’s really hard for me to photograph the GBC screen head on without getting some reflection so I had to do it like this, but I think it accurately reflects the colors I see on the screen.

Compared to the backlit screenshot of the same scene, you can see the bottom of the screen which shows your items equipped and your hearts is not that stark piss-yellow on a real GBC. Instead, it looks merely white or off white at most. The water is nice and pastel-colored blue as well rather than the deep, deep blue you’ll see with a backlit.

The rocks look properly gray instead of purple. And the bag and ground overall looks brown instead of orange.

I can’t help but feel like the bottom images is, overall, very hard on the eyes and everything looks too saturated, making the scene feel much darker. All the colors are just too much for the scene and the tranquility of the color pallete the game nails is all lost on a modern screen.

Anyone else feel the same way?

Either way it is still rough to play them. OG Game Boy is fine not backlit with higher contrast games and less reflective screen, but GBA is hell to get the right lighting and angle.

Yup. The AGS-101 has a screen similar to the DS Lite, which while impressive for the time (74% of the sRGB colour gamut is higher than the early generations of smartphones and iPad models) was clearly way too much for earlier games which were designed for older displays with different colour profiles.

I noticed some later games, made with GB Player support in mind, have colour profiles to support other types of displays, for example Final Fantasy Tactics Advance has four different colour profiles to choose from in the main menu.

Some extra info crossposted from the GB thread:

Been reading into the oversaturation of the AGS-101 display (and by extension, the DS Lite display) and it reminds me a lot of the overrated OLED Vita display which oversaturated colours compared with what the monitors the artists would have been working with. Intentionally muted colours often turned overly vivid (or neon as was the case with green) and I remember it being a annoyance with that display. It appears to be the same deal here:

I played some Wario Land 4 on my Game Boy Micro, N3DS XL (I thought maybe the screen dimming would compensate) and DS Lite and only the Game Boy Micro didn’t turn the sunset a bright yellow - it was orange there. The DS Lite had a colour gamut of about 73% of sRGB according to the experts at DisplayMate, which was super high for 2006, and would explain the oversaturation given what Nintendo R&D would target back in 2000/2001 for WL4.

I also saw this comparison over at the shmups forum, haven’t played CastleVania HoD before so it’s a surprise to me how different it looks:

Out of all these backlit models, the GB Micro gets closest to what was intended by the developers.

I’ve heard some things about color restoration patches to address this issue but I don’t know a whole lot about it.

I also saw this comparison over at the shmups forum , haven’t played CastleVania HoD before so it’s a surprise to me how different it looks:

Yes, that is a startling difference. Probably the most stark illustration of this issue.

Either way it is still rough to play them. OG Game Boy is fine not backlit with higher contrast games and less reflective screen, but GBA is hell to get the right lighting and angle.

See… when it comes to monochromatic OG Game Boy games, I’m actually 100% fine playing them on a blacklit screen. It’s when you add color into the mix that things get all screwy.

Regarding GBA, I do agree that the OG model is just insanely dark out of the box.

That’s why, for earlier games on the system, I prefer a frontlit GBA SP AGS-001. It gives you a bit more of a lighter pastel look than ideal lighting conditions on stock OG GBA hardware, but it doesn’t affect the gamma like a backlight does. For games that look great with a backlit, I prefer a GB Player honestly, as the AGS-101 just has too slow of a refresh rate leading to poor ghosting.

The GBC, GBA, and AGS-001 all had an impeccably fast refresh rate. Then the AGS-101 brought it back to OG Game Boy/GBPocket levels of smearyness in motion.

Welcome to my sickness:

They definitely look off… and I would rather play them on a backlit system regardless. 10 out of 10 times.

poptart, that is beautiful. I have a similar thing happening at my place but not quite as majestic.

Are one of those OG GBA’s a stock unit with no backlight? If so, do you recommend grabbing one for nostalgia’s sake? I haven’t owned the original since I sold it the day the SP debuted.

I must add one more device between the original GBAs and the frontlit AGS-001.

The GBA received a screen revision in 2002 to coincide with the orange (Japan-only) and black model launches. I remember reading about how the new screens had better contrast and brightness in either NGC Magazine or Advance Magazine at the time, and I hadn’t been able to find info on the web…until I found this GameFAQS hardware FAQ: https://gamefaqs.gamespot.com/gba/916598-game-boy-advance/faqs/10973

Q. Is there any difference apart from superficial ones between them?
A. Some of the newer GBAs (black and orange guaranteed, others sometimes) have superior Matsushita (Panasonic) screens as opposed to the older Sharp ones. Not only does this make the screen sharper, it also makes the GBA look better with an Afterburner.

Good point about the refresh btw - I was blown away going from GBP this year to original GBA. Had forgotten how good it was. I wonder if the backlight’s power consumption in the mid 2000s is to blame. I’m no electrics/physics expert!

I was the same way for years. But I wasn’t enjoying them for long periods of time some reason. Then, just recently, I randomly inserted Link’s Awakening into a stock GBC a few months back and fell in love with classic non-lit screens all over again.

GB Pocket’s refresh rate is the only thing keeping me from picking one up. I much prefer playing those games on a GBC in black and white mode, Super Game Boy, or GB Player using GBI ULL.

Slow refreshing LCDs is one of the few things that can make an experience feel dated for me. I’m usually very easy to please. But that’s one thing I find hard to go back to.

It’s worth doing for the attractive packaging designs and the lovely industrial design of the hardware itself.

Consider how many GB games were designed to play nicely with the ghosting (single screen levels of DK ‘94 and puzzle games, boundary-only scrolling in Link’s Awakening and FF Adventure, slow character movement in Castlevania II) and it works pretty well.

Not sure I’d want to play Pokemon on a GBP because there’s constantly movement for everything on the overworld.

I agree the design of the GB Pocket is very clean and elegant. I do love holding one. It’s probably the sexiest of all Game Boy hardware, including the Micro which I consider to be more of a novelty (like the Switch Lite).

I also have a stock spice orange GBA that has needed to be cleaned for a few months now.

It’s really true that GBA depends on the game. A lot have the baked in gamma correction and near neon color choices to look right on that original screen. But very early games were super dark and later stuff was more intended for the SP.

Most original GB games scroll very slowly (Kirby for example – you can’t run like on NES) or have static screens with only sprites moving (Link’s Awakening does this). Those look great on an original GB + pocket despite the blurry refresh.

Some games I think the developers were drunk. Donkey Kong Land is a fun little game but yeah it’s hard to play on just about anything.

BTW I agree with the toy-like appeal of GBC. It’s not trying to be too much, it’s just a toy for kids with a ton of fun games.

Has anyone got any experience with the new GBA aftermarket screen that’s been floating around for the last few months? From what I’ve read smearing is a non-issue but I’m not sure about the colours.

I love my 101 but the smearing really kills it for me.

Don’t have one but I passed because it has tearing very noticable on anything flickering at 60hz, like the map in fzero.

Whew, this thread just took me down a rabbit hole. I was curious to see some of the differences firsthand and tried to do a few comparisons. Not sure how much justice these photos do the screens, but maybe it gives an idea:

GBA SP AGS-001: No blur, but washed out colors with the light on. My least favorite option.

GBA SP AGS-101: Colors are too saturated, but I prefer it over the 001 screen. And yeah, the blur sucks.

GBA modded AGS-101 (after-market screen): I had a hard time capturing this with correct WB, but it’s an improvement over the original 101 screen in my opinion. Better color accuracy and very little blur to my eye.

GBC w/ Freckle Shack screen: This is a super convenient way to play an original GBC in the dark, and while my first impression of it was good, I’ve started liking it less in recent days. This comparison didn’t do it any favors, sadly. Feels like it needs a scanline shader or something. I may actually prefer the knock-off AGS-101 better.

Bonus screen… I dug out my GBA that I modded with an Afterburner over a decade ago. Still works! This was a black GBA that I imported from Japan back when I thought that color wasn’t coming to the US. And I’ll be damned, it was better than I remembered:

I’ve probably made things worse for myself now.