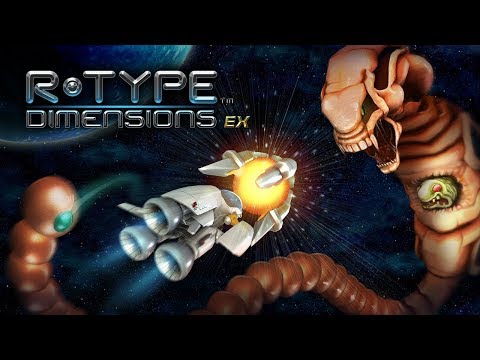 Now I must confess to not having played any of the R-Type games, having been captured by the Gradius series instead. But I’m sure you can fill in the blanks for me.

This seems to be an upgraded version of the Xbox 360 and PS3 game of almost the same name (minus the EX moniker). Tozai Games has experience releasing revivals of older titles, too, having recently released Lode Runner Legacy and Spelunker Party. So hopefully this is a good conversion.

Is anyone else planning on picking this one up, and what are your thoughts on R-Type I and II?

Personally, I’m hoping the games at least play well. Lode Runner legacy was locked to 30fps and had very noticeable input lag (might be difficulties optimising for the Unity engine). While Spelunker Party was upgraded to 60fps after the locked 30 of the previous game, it also suffered from noticeable input lag and load times.

I have my fingers crossed that either Tozai Games hasn’t ported R-Type Dimensions to Unity for this new release, or they’ve done a better job optimising it to respond like it should under the thumb.

My co-host had high praise for this when we played R-Type in June. I’m going to pick it up but there are other titles (Battle Crust) I need to pick up soon so it will have to wait until 2019. The episode was a little rough as I had to record using a rock band mic for this episode.

Listen to Shoot the Core-cast episodes free, on demand. The RF Generation Shmup Club crew discusses the original R-Type, one of the pivotal early shoot-em-up games that helped define the genre! The easiest way to listen to podcasts on your iPhone,...

I could never figure out horizontal shooters like this or Gradius. Not sure why, but I find them so much harder than vertical TATE games.

Which is odd considering how much I love Metal Slug. You’d think the skills would translate.

The original R-Type is one of my favorite games of all time. I have tried to finish the later games but haven’t managed it yet.

I will be keeping an eye on this one for sure, thanks for the heads up!

Yea seems correct in my opinion. It’s way harder to line things up horizontally than vertically as far as whether or not you’re going to get hit.

I guess games like Contra and Metal Slug don’t suffer from that as much because you’re anchored to the ground horizontally in some fashion most of the time.

I’m going to wait for more information about the presentation of the original visuals before I jump in. A post on the shmups forums suggests the classic video mode is a bit like what Sega is using for AGES OutRun on Switch, and what Nintendo did with GB games on 3DS Virtual console. That is, you see the surroundings of the arcade cabinet around a pixel perfect (or perhaps pixel doubled or tripled) display of the game with scanlines added.

I’m interested to know how accurate the classic mode for R-TYPE 1&2 is as well.

Think so, they added features to it like manually controlled slowdown/speed up and camera tilt but based on what I’ve seen it’s similar to the PS3/360 release