Growing up, most of my gaming life has revolved around consoles. I owned at least one console (but usually more

For a short time during my teen years, I had a computer that could play some games and I had the pleasure of playing games like Doom, Kyrandia and Warcraft 2.

I always wanted to play RTS games through the years, but never wanted to try the ones on consoles due to the control scheme.

About a year ago, I FINALLY got a respectable gaming PC and have been catching up on the classics of that platform, especially all these RTS games I longed to play over the years.

So I’ve been playing tons of Warcraft 2 recently, dabbled in Starcraft 1 & 2 and also checked out Warcraft 3 as it seems to have some additional RPG features which pique my interest.

So RGB friends, let’s have a thread to celebrate RTS games!

Looking forward to your stories, feedback and recommendations!

Hard to bring up the RTS genre and not think about Command & Conquer. While I was never a big RTS fan, C&C completely took over my college dorm freshman year and dominated nearly every waking minute. These were the days before everyone had Internet access in their rooms, so it all came down to enterprising geeks getting a hub and running 10BaseT cables up and down the hall. Honestly, it all feels like a lifetime ago…damn.

I’m not much of an RTS guy.

But I love Command and Conquer. I got into Red Alert as a kid due to a friend who had it on an AST Pentium system. Then as soon as we had a PC fast enough I got C&C Tiberian Sun. That game is really great, playing it recently it holds up really well.

I skipped or missed out on many releases in the series but picked it up again with Command and Conquer 3: Tiberium Wars. That plus the expansion Kane’s Wrath are really fun.

More recently I picked up the Command and Conquer Remastered Collection on steam to play the first game plus Red Alert. They have somewhat modernized the games and given them a lovely refresh.

Also, if you really want to explore the roots of the genre, Dune II is a must.

As far as I’m concerned, Supreme Commander and the Forged Alliance expansion pack is still the pinaccle of the genre. The game was half the dying gasp of PC exclusives with AAA budget (basically the last one alongside Crysis), half sheer fucking spite for the direction Starcraft took the genre in, and it’s fucking amazing. You have huge battlefields (up to 81x81) you can zoom out in a blink! A default unit cap of 1000! “Rock beat rock” design where everything can hurt everything else, as long as it can shoot! You can do crazy shit like set up your factories so that units directly board a gunship as soon as they roll off the assembly line and ferry it to a specific spot on the map! Battleships that can sprout legs and walk on land! Not feeling that Level 3 sonar was a good use of your energy? No problem-just convert it into a torpedo! You can reclaim the debris of everything that gets destroyed and if you build a building over a destroyed building, you’ll get a time and ressource discount! Giant fucking spider robots that crush smaller units under their legs! Or if you’re the practically-minded sort, there’s the submersible mobile factory. Dual-monitor support, because why the fuck not? 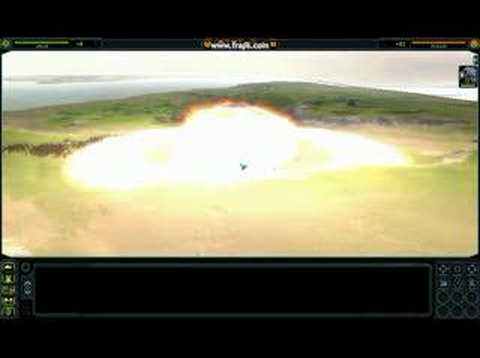 Unfortunately Supreme Commander 2 is a consolized mess and I haven’t heard much good about the quote-unquote spiritual successor Planetary Annihilation. But that’s fine, I’ll always have SupCom.

Awesome responses already, thank you all for the feedback. I just bought the C&C collection so I’ll give it a try soon.

A certified hidden gem ™ in the genre is Warzone 2100. The game was notable for many things, including being one of the first fully-3D title in the genre where the Z-Axis wasn’t just for show, a modular unit-building system where you could create units yourself by mix and matching available means of locomotion, chassis and attachments, and that someone was deranged enough to give it a PS1 port.

The really sweet thing though is that one of the developer open-sourced it in 2004, meaning you can download and play it for free entirelly legally, and since then fans have actively maintained and upgraded the game (the latest release as of this writing was 4 days ago!). If any of what I mentioned sounds at all interesting, there’s no harm in trying it out.

I remember playing this on MS-DOS when it came out. Such a good game!

I used to love RTS games and kind of feel sad that there is less variety of big budget ones anymore. I remember loving ground control, company of heroes, dawn of war, battle for middle Earth, the total war games, warwind, red alert 2/3, Tiberiun Sun StarCraft and of course Warcraft 3

Awesome, thanks for all the recommendations @BarrelCannon.

I’ve been meaning to try the Total War series, thinking of starting with the Warhammer ones.

I’ve started playing the PC port of Halo Wars after it spent nearly a year untouched in my Steam library, and guess what, it’s pretty good! Given it was designed to be playable on a xbox 360 controller, it was obviously going to be dumbed down in a lot of ways. For instances, you don’t build structures but start out with a pre-built base for which you can build various attachments and constuct other bases at designed spots accross the map. But its simplicity works to its advantage, as it s a remarkably fast game to assimilate and it makes the micro-heavy mechanics easier to digest.

Thanks for the recommendation @Glowsquid! I also have the game sitting unplayed in my Steam library so I’ll definitely give it a go.

The Homeworld Remastered Collection (comprising the original game and its sequel but not the Cataclysm/Emergence expansion pack; “classic” version are also dlable as separate executables) is on a stealth promo on GOG, where until December 27 it’s 95% off with a Youtube review promo code, so about $2 CAD. Not sure when I’ll get around playing those games but that is absolutely a steal.

A conversation with a friend reminded me of an childhood favourite, Impossible Creatures.

Basically, the big gimmick is that you can make your own units by combining animals (a total of 76 with both official expansions installed), and which animal you put in the front or back will determine not just its stats and means of locomotion, but also decide special abilities like health regeneration, ability to crush buildings, etc etc. The concept is so fun and outrageous that it makes the issues with the RTS gameplay (low unit count, the cheating in the single player campaign is ridiculous) bearable. It’s $2 in the steam sale until tomorrow.