Sega CD/Mega CD |OT| "What are you waiting for, Nintendo to make one?!"

Is it a backup disc? I’ve had some issues with backups on my SCD depending on disc quality and burner speed.

Oddly enough, it seemed to hang right before the title screen a few minutes ago, but for the last few title loops its been playing just fine. Strange, but hopefully its just a cleaning here and there issue.

I’ve had some scares with my SCD before (Model 2 unit, bought brand new back in the day), but it continues to truck along. I would love an SD replacement for it, as I fear all these early 90s CDROM based systems are going to only continue to have issues in the future.

Just scored a pretty decent deal for Popful Mail (finally), but just realized i could have gotten the japanese version even cheaper. Is there enough text in this game to make owning the western version worth it - or did i just waste my money?

well, the US version is way harder! it’s chatty here & there (WD effect & all) but you can get by without it

really, you’d best just sell it to me for a cool hundred & move on, it’s for the best

Hahaha! I take that a sign i should keep it then. Bought it myself for 120 btw, which i thought was a too good deal to pass on.

I just wish I wasn’t such a condition chump since that is what gets in the way of a lot of my purchases.

I’ll only buy something if it’s complete and in fantastic shape. I’d rather have a nice collection then a bunch of loose shitty carts everywhere.

I don’t even know what it is with me, aside from mental illness. But yes, I agree. Even if it shouldn’t matter to me, it (condition) does. It’s just an odd point of view from someone who is completely fine with digital games and pirated stuff for if I want to play something. All the stuff I own and take the time/effort to buy physical copies of I just would prefer to not be messed up or damaged.

When I first got back into retro I bought loose carts. Whatever was cheapest and played the game so ripped labels whatever was fine. I even had a blank Snes cart with “ZELDA” written in sharpie.

After buying a ton of carts like that it just looked like a big mess so I started buying boxes for them, using cassette tapes for gb/gbc/gba games and it still didn’t look right. My games in DVD cases looked so much nicer, like ps2/xbox etc.

I ended up selling off most of my loose carts and started buying CIB stuff and it looks so much better to display. If I’m going to rummage through a pile of carts I’d rather just play it on an everdrive. I want to be able to open the box, to read the manual start to finish before I play. That probably comes from growing up as a pc gamer when reading the manual was required if you wanted to play the game.

To me this looks so much better then a stack of loose carts and to me, it means alot more too. 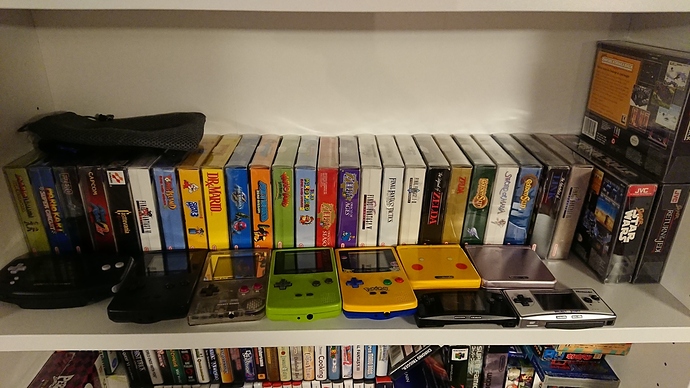 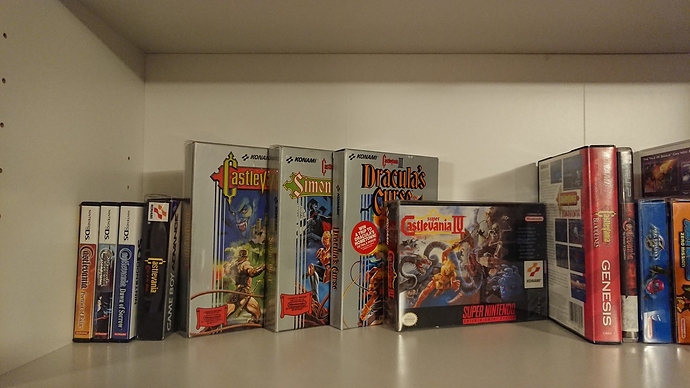 Gameboy stuff was just a random pic. Not final setup.

I kinda gave up on SNES and N64 in boxes because so many of those boxes have been discarded. I’ll do it if I think it’s worth it, but otherwise I’m ok with loose carts there.

SEGA Genesis and all the SEGA systems? No way. I want the box and the book.

normally i get this, but i have the case for Popful & just want a deal on the disc at this point! manual can wait on solid 3d printing one day, haha

It was more complete than the SNES one but the timing of the attacks always felt a little off to me and the colours could have been done better. Both were worth playing but nowhere near arcade perfect.

Didn’t someone do a color hack that you can just rip? IIRC it uses the JP version so you can have the uncensored Roxy & Poison. Don’t quote me on this but I remember seeing this, even recently so.

Man, I had no idea Popful Mail went for that much. I just checked eBay. Long, long ago I specifically made it a point to buy every released version of Popful Mail. It’s been one of my favorite games ever since I first played it on PC98.

It has ballooned up a lot pretty fast, along with a few other Saturn and Sega CD games.

I’m the same way. I started with Genesis in box, so I just continued like that. N64 I cared until I purchased end-labels for the carts. Everything else cart based I don’t care.

Genesis games without box and manual always rub me the wrong way. Like, they gave you the damn plastic box to protect it and keep it in. Why did you ever get rid of that?!

The Nintendo stuff I can at least understand. The packaging is not durable and in fact seems very discardable like Atari product before it.

The lack of top labels on N64 carts is indefensable.

It would confuse me more if I didn’t have friends that would just have stacks of their cd based games/music/and later DVDs all over their homes. :c

You have bad friends. Not really but kinda.