Who here is grabbing Xenoblade 2?

Wow, that looks great! I don’t have anything close to a gaming PC though so the Wii will be where I play it, if I end up getting it. My backlog and time for gaming are at odds with each other.

It looks pretty good if you have a good 480p solution. Certainly very aliased though.

The original is a great example of a game needing a CRT. I havnt tried it with the ossc but it looks like straight fucking ass on a flat panel. On my crt@480p it looks pretty damn good.

This game basically confirms what a dud X was. This is what I wanted.

I’m skipping 2 for now. Something about it looks off to me. I’ll probably grab it sometime next year if people have an overall positive impression of it.

Another good reason to knock it the fuck off with the kid protagonists.

So is the game good or not? How does it compare to Xenoblade and XCX?

I’d have to put in more time with it, but so far it seems good. Performance is a solid step back from X and the game seems to be a lot more linear and story-driven like the first game was. Personally I see that as another step back (too many cutscenes interrupt the gameflow imo), but for most people it’s a good thing. Characters are pretty fun, voiceovers are hit and miss (Rex sounds great, boob-lady not so much), music is great. So it seems like a solid entry and more in line with what the first game did. So if you like XBC better than XCX you should like it. Personally I think X is superior to XBC as I’m much more a gameplay guy than story guy so I’m inclined to think the series peaked with X, but I know that’s not a popular opinion.

Still I’m curious to see how the game is gonna develop over the hours, I’m really only 7 hours in or something.

it’s actually not bad. There was a slightly frustrating part of the story very early on in the game which made it difficult but now past that the grinding and gameplay becomes enjoyable. My main gripe is the areas are very large and it becomes somewhat vague in where you have to go so you lose direction here and there. But I’m starting to enjoy myself once again. 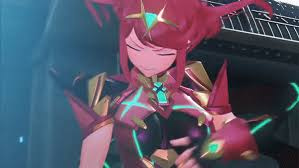 I’ll let you know when my copy arrives. Shakes fist at Amazon

I’ll be getting it soon. Reviews seem to be good from what I’ve seen.

I’m not picking it up yet for the sole reason I still have to play XC1 and finish XCX.

I have the collectors edition and I’m kinda of nervous. Many of us here are video snobs and I know that a games performance can negatively impact my enjoyments. I have a long return window for this game so I think I’m going to put it on my shelf until performance patches come in. I just can’t justify the time sink in a RPG that leaves me wishing it looked and ran better. This has been an issue with trying to play the original on Wii and to some extent the N3DS. I feel it’s almost easier to overlook that stuff on a underpowered hand held than it is on a $300 system.

I haven’t notice any performance issues, nothing as bad as the wii U game which had major pop in. I play mine mostly docked

DF tech analysis is out and in portable mode it gets down to as low as 368p. That’s quite bad but people are saying it’s “lower than SD” which is silly (SD is 240p/480i). Even docked it seems poorly optimized and somewhat worse-looking than XCX (dynamic 720p with blurry AA vs fixed 720p). Portable is straight up bad. I’d expect a patch to address this nonsense!

The resolution floor is crazy low but tbh the sharpening filter bothers me way more than the res.

DF tech analysis is out and in portable mode it gets down to as low as 368p. That’s quite bad but people are saying it’s “lower than SD” which is silly (SD is 240p/480i).

I assume most people assume SD to be 480p since that is the lowest resolution most modern HDTVs go.

Yeah that filter looks terrible, like something a crappy TV setting would do to the image on the screen.

Well, just over 200 hours and I’m a few tasks away from 100%ing the game. Thoughts are mixed. It’s certainly addicting like the last two games, and overall much better designed than X (but not 1). The world is great, really reminds me of BK. Exploration is still the most enjoyable aspect of the game, and most areas are well designed. I think I preferred the exploration in the last two games a bit, as in this game each area ends up feeling a bit small in comparison, though I think that’s just being used to the large scale of areas in this series by now.

The new battle system is neat, but throws away most of the strategy in the previous games. Positioning doesn’t actually matter, driver arts are only important for the driver chain (topple, etc.), and for raising the special gauge. They all do imperceptible damage in comparison to Blade Combos and especially Chain attacks. So the battles are just “stay alive while you hang orbs on the enemy and then press + to win.” Seems complicated at first but in the end is much more simplistic than the previous games. Especially later in the game when Rex becomes a one-man army, the battle system becomes a joke.

Characters and dialog are frankly atrocious, but I hate anime. The overall story is actually interesting, as is always the case with Xeno games, but the way it’s told is so silly that it sort of ruins it.

Quests are for the most part more enjoyable than in the previous games. However one huge flaw is the “mobile-ization” of the game in the form of the gacha system and merc missions. The merc missions are just tedious busy work— the basic gameplay is already addicting, you don’t need timers to keep you engaged. I actually didn’t have much trouble with the gacha system, only had to grind for my last 5 rare blades and that just took a few hours. But in principle it’s not a great idea. Non-rare blades only exist for merc missions, and are extraneous. Some of the rare blade’s side quests are just insulting. Mainly Ursula’s. Close to (if not more than) 200 merc missions for her quest alone. My last 50 hours with the game just felt like a slog.

I think having only 3 blades total for each driver would have led to a much more focused experience. Either that or give permanent stat rewards to the driver for maxing out a blade’s affinity chart (like an FF5 job system deal).

If you can’t tell by now, I have a compulsion to 100% games, so that’s just how I play them. You can say “just ignore the stuff that’s tedious”— fair enough, but it’s in the game, and if it’s not fun it shouldn’t be there to begin with. There are also just some little nagging things that were poorly designed. Why am I kicked out of the menu screen every time I make a single dumpling when I need to make 100 in row? Just let me stay in the menu and mash out 100 in a minute. When I have 50 of the same piece of equipment (of the same rarity), why don’t they stack? Stuff like that.

Overall I certainly enjoyed the game, but it’s got some rough spots. The battle system being less engaging is I suppose the biggest problem. However the borderline disgusting character design and eyerolly dialog and whatnot did have a pretty big detrimental impact on my enjoyment of the game. And that’s the first time that’s happened in this series. I usually don’t really care about that stuff and have a pretty high tolerance for dumbass anime shit in games, despite not liking it. But this game takes it way over the top.

Thanks for reading my essay, I’m aiming for a Pulitzer on this one.