What are you playing these days?

Simple question. No rules. This is just a catch all place where you can talk about the games you’re playing right now without needing to do a full LTTP/RTTP thread.

Recently I played Layer Section on Saturn - which was awesome and I finally beat recently. I’ve posted about it many times before, so won’t discuss much else about it.

Now I’m playing Sin and Punishment on N64 - this game is never talked about enough. The music is so dope, the gameplay is white-knuckle-intense, and the story is surprisingly interesting. Treasure was at the height of their powers when they made this one.

I’m also playing Majora’ Mask on N64. I still never beat this one, even on 3DS. I decided to revisit the original version though because I prefer playing on my PVM. It holds up better than I remember.

So, what are you playing at the moment?

About 25 hours into Paper Mario Color Splash on Wii U. Absolutely loving it.

Other then that I am playing a lot of Utrawings on PSVR.

Tried to get into Enter the Gungeon on Switch but not feeling the controls. Might try to reset them to something more my style.

Most recently I was playing Grim Dawn but got side tracked by life. Really scratched the ARPG itch! I beat normal mode and need to backtrack and clear some optional dungeons now that I’m more leveled.

I’ve also been dabbling in PubG on PC. My buddies are playing it like it’s their job lol.

I hope to pick up a switch with Mario soon. I also bought several games during the steam sale. The backlog continues.

Finally got my shit together and playing Breath of the wild again. Dropped it after putting a few hundred hours into it at launch for real life issues.

Or I would be f it weren’t for magfest. Followed by AGDQ. >:c

I am ~ 38 hours into Xenoblade Chronicles according to my save file but I think the switch glitched it. I feel like I am closer to 20 hours. Anyway, I am loving the game. Yeah its anime. Not really into a lot of modern anime but I am enjoying the hell out of this game. Combat is really fun.

I was all about JRPGs on the SNES/PS1 and despite really wanting to like PS2 JRPGs I just didn’t. FFX was disappointing and 12 came out when I was playing a lot of Warcraft so I never really gave it a chance back then (not a chance = 40 hours then I quit). Basically, during the PS2 era I played DQ8 and that was about it. I found out about Persona 4 after the PS3 came out and I played it a lot of it until I heard it was coming to Vita and I just held off until I could play it there. The last jrpg I really enjoyed like Xenoblade 2 was Ni No Kuni.

Xenoblade Chronicles 2 when I can get the Switch away from the kids with a smattering of Gunbird on there, too. Oh, and last night I played through Top Hunter Neo Geo on the Switch using continues and was immediately better at the game on one credit because of it. That said, it seems like a difficult game to clear on one.

When I can’t get to the Switch, I typically end up in front of the PC with the likes of Pinball Arcade, Mushihimesama or something from the backlog. I also got the PS3 back up and running upstairs so I could transfer some stuff to the PSP and was playing Raiden IV Overkill for a bit. Nice game!

Finally, I cracked open the SNES Classic and played some Street Fighter II Turbo (which is just a PITA with the SNES d-pad for dragon punches) and some F-Zero.

Unfortunately nothing in depth right now. I was playing the beginning of FF7 prior to the holidays (was gone for 10 days). I’m only in the Shinra Tower so early on.

SNES wise, I spent some time with UN Squadron prior to break. I played a very short amount of Donkey King Country and Darius Twin last night.

OG Xbox is a constant rttp with RalliSport Challenge 2. Outrun 2006 also gets some play time. I think I have one of the Star Wars Battlefront games that came with the console bundle. I may check that out this weekend.

I’d love to get hooked on a game but given my lack of free time it’s hard to do these days.

Heh… yeah, getting hooked is hard for me as well. Just too much going on, plus I like to catch the Sixers whenever they’re playing. I need to do more portable gaming during that time…

Preparing for a move and packing stuff, at the moment, so it’s pretty much me and my N3DSXL. Cursed Castilla EX and 3D Out Run are what I get back at the most, especially the latter.

I started Samus Returns on 3DS. I don’t know if I like it as much as AM2R but it’s pretty good so far. I wish it had the option for d-pad movement, though. 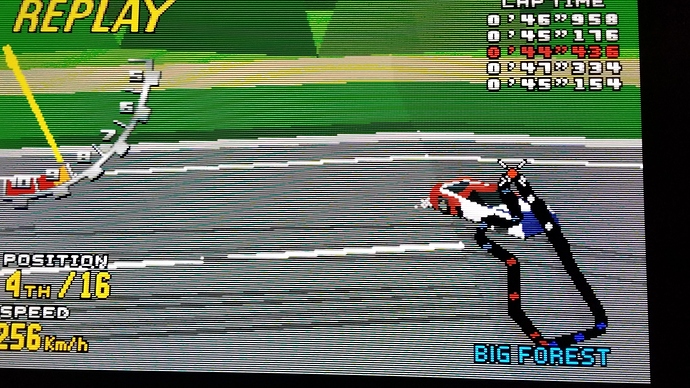 All Mario Odyssey here. 60+ hours and 700+ moons later and I still love it. It’s been a long LONG time since I’ve put this much time into a game.

Yeah, it’s been all Mario Odyssey for me as well (Nearing 400 moons). And PUBG with my buddies, which is way too much fun.

Definitely on my radar now that I’m playing Titan Quest. In fact, from the pictures I’ve seen, it looks like 80% of Grim Dawn systems’s are lifted straight up from Titan Quest (skill tree, dual class, UI, etc). The dark atmosphere looks really nice, can’t wait to play it.

Just finished the main storyline in GTA Vice City on the Xbox. Despite putting significant time in GTA 1, 2, 3, and San Andreas when they were current, this is the first time I’ve seen the credits in a GTA game. The city’s design and small size are refreshing when compared to something like Watch Dogs, and the gameplay holds up with the almost modern 3rd person on foot controls.

I’m also getting re-immersed into Zelda BOTW after putting the game down after 50+ hours last spring. I’m pretty close to taking down my third guardian. I think this is the year I finally finish a few open world games after succumbing to Ubisoft Tower fatigue.

Lastly, I’ve been enjoying playing the incredibly charming Kirby’s Epic Yarn co-op with my son. Such an excellent introduction to 2D platformers.

Working on 1CCing Musha on Genesis, can get to the last boss, but it’s a real crapshoot. Also playing lots of Rev 2, as always. Played a few great walking sims, What Remains of Edith Finch and Tacoma on PC, messing around with PUBG, too. Found some old 360 games I’d packed away, so I started up a nee game of Catherine and got to stage 6. Really, just biding my time for DBFZ.

I’m in various states of progress across a dozen of games, but recently I’ve been playing Shovel Knight’s Specter of Torment campaign. Tight platforming, but the boss battles are a bit too easy.

Getting into the early parts of Mother 3. Story is on a different wave but I can’t get my head around the rhythm battles at all. It’s gonna be a constant frustration on this playthrough, I can tell.

Also playing a bunch of stuff on my PS4, but it’s not holding my attention. Been a scrub at Rocket League and slowly plodding through Uncharted 2 Remastered. This era of gaming is not for me.

Finally, playing shmups on Wii Virtual Console. Trying to focus on Gates of Thunder atm. Got so close to beating Lords, but the final level wiped me out.

I’m in the middle of too many games at once right now. Working on Assassin’s Creed Origins which I’m like 38 hours into, and still have so much more to do in that game. I’m up to Chapter 5 in Ys VIII on Vita. Trying to play through it quickly there, and then playing it again on PS4 when the new translation patch comes out. I also started Steam World Dig 2 on Switch. My Fiance and I have been playing a ton of Tetris Attack on SNES lately.

Xenoblade Chronicles 2 is my modern game of choice atm, when I can get onto the Switch anyway. I’m also playing a lot of Gunbird on there. I’d like to 1CC it but I’ve only completed the mirror once so far. I’m using the Pro Controller but I think maybe I need a joystick. I’ve heard there are Brook converters so maybe I’ll have to go that route to use one of my old sticks.

When I’m not able to land Switch time, it’s usually Pinball Arcade on the PC or something on the PS3 which often includes PSX games. I did grab some retro stuff this past weekend I’ll hopefully be posting later tonight in the pick-ups thread though I haven’t played them yet.