I picked up an Xbone controller in the box for $10, with broken thumbstick, from a local buy and sell site.

I then did a little research and found out that all the analog sticks in the xbone controllers are ALPS brand, and can be ordered really cheap on eBay. A month later, and I’m ready to begin my repair.

Time to do the teardown.

Bottoms are slightly different. I had to use my soldering iron to melt off the little circles on the bottom of the new one to make it sit flush with the PCB.

New analog stick installed. I ended up doing both sticks, as the other one didn’t feel right either.

All back together, and it works awesome! Can’t complain for a grand total of about $14 CAD

Aww yeah, great job on repairing it, got yourself a nice bargain in total!

I bought some non-branded sticks awhile ago to fix a pad with drifting issues, they sort of worked but they still drifted (in other directions), will check out this Alps brand, thanks for the post.

There are probably others as well, but if you’re curious about a certain controller, just open it up and look for the ALPS branding on the analog.

These are the ones I ordered. Not sure if there are different models for different controllers, but these matched my Xbone controller nicely.

Find many great new & used options and get the best deals for Analog Joysticks Thumbstick Cap Screwdriver Repair Tool For Xbox One Controller at the best online prices at eBay! Free shipping for many products!

Thanks for the link.

I just checked the cheap ones I bought off of eBay and they have ALPS branding but a friend said there’s a lot of fakes out there.

Maybe I’m just naive, but considering how complicated these little things are, and the super low price that ALPS us willing to sell them… It’s hard to believe that there would be a bunch of fakes out there.

I could be completely off-base though.

This is a great resource! I probably play my Xbox One the least out of all of my consoles, yet I’ve had to replace the controller twice due to significant stick drift.

I went down a bit of a rabbit hole yesterday regarding these mechs opening up all my pads and checking the laser cut on the ALPS logo and to see if there were any other differences, seems like they vary a lot and the precision and depth of the cut doesn’t relate to being genuine or not which I was hoping was a way to tell if it was a clone.

So my notes are generally from anecdotal posts but some of the Assembler Games posters I recognise as knowing their stuff so I’m likely to be persuaded or lean in their direction:

Someone sells working ALPS sticks taken from controllers here. At that price though I think it would be better to get a broken pad with working sticks off of eBay.

So the main issue seems to be the potentiometer inside the pots which I’ve seen people swap in working/perfect pots from a broken stick into a 3rd party/og mech and fix them:


I tried this yesterday and it seems you can freely swap X and Y axis but I had a slow turn issue so it didn’t help, not sure what the fix or problem is for that yet and I’ve got some pots to take out from a junk pad to do some further testing on this.

Which led me to this video:


Seems someone is selling just the sensor itself and the curious thing is that it looks like no other sensor I’ve seen as they’re usually black, not sure who is making these and stopped short of looking to see if they were available anywhere else.

Buying the sensor alone isn’t much cheaper than getting a whole mech so it would have been nice to just buy a bunch from China to test. So, in conclusion, it’s a crapshoot

Another ‘fix’ I’ve not tried was bending the axel/prong that rotates the carbon track but maybe someone will be interested in testing it: 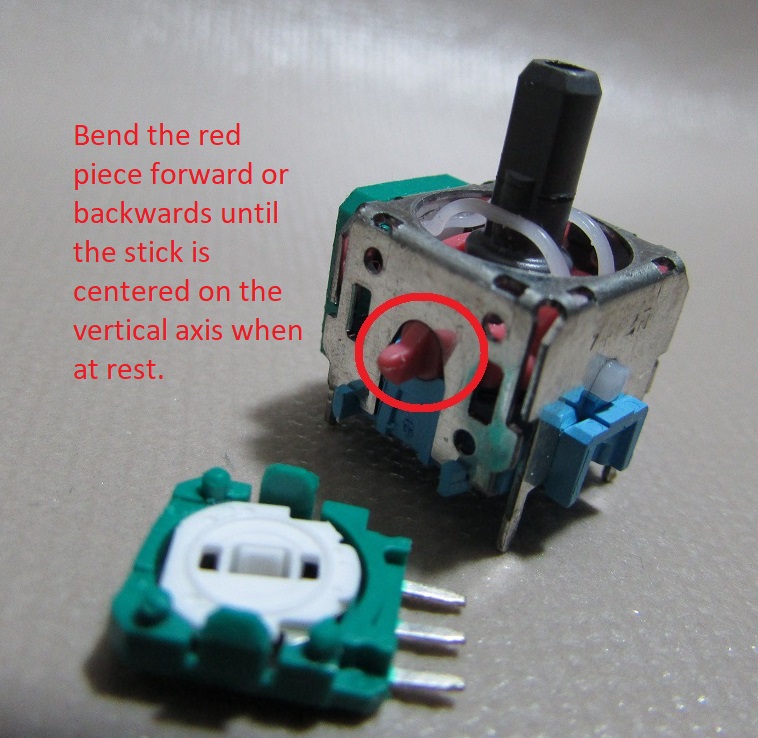 IMG_7799-Copy-1.jpg758×738
I was looking at the datasheet for these ALPS sensors and the ones they use in the XB1/PS4 are rated for much higher clicks and rotations cycles than ones used in the 360 (and I presume PS3) luckily I’ve never had any issues with 360 pads (even though I know they’re susceptible to the same issues) and thought maybe putting them into an xb1 pad would be a good move but alas the sizes aren’t the same.
2 Likes
raskulous April 29, 2019, 8:06pm #9

Very interesting information, thanks! I played a few games of Rocket League with mine yesterday, and they feel really good. They are a little stiffer than my other one, but my other controller also has 3-4 years of use, and 1500+ hours of Rocket League on it, so that’s a terrible comparison.

Some notes about my experience so far, and my purchase:

I guess time will tell, but so far I have no indication at all that the analogs I bought are fake ALPS.

Nice, that’s good to hear it’s all working fine. I’ve seen some on aliexpress that are labelled as ‘original’ that I’m thinking of taking a gamble on.