Broke my wrist, give me one handed games to play

So, today I learned I broke my wrist 3 weeks ago and apparently it’s pretty serious and I’ll need some surgery. I’ll also need to take some precautions over the next few months to ensure everything heals properly.

I’m not sure what the thumb situation will be after the surgery but I assume I need to have a splint for a while. But it’s my left, non-dominant hand so I’ll at least be able to play some one handed titles during the time. I may be able to play 2 handed games too, but let’s assume I can’t.

What are some good one handed titles I should focus on for a few months?

Also, what are some good inexpensive light guns + games I could easily get on the cheap that are fun?

I’m specifically looking for action titles. Something to keep my reflexes from becoming garbage.

There are some good options on PC for one handed games. I’m not aware of action games but stuff like Civilization 6, Cities Skylines, and older point and click adventure games could be a lot of fun.

The DS is your friend! So many games offered Stylus controls, which gives you lots of options on that platform.

I hope that you have a speedy recovery. As for one hand games, I remember that ASCII PS1 one hand controller, built for RPGs. I’d never used one myself, but it’s an option.

To add to the DS and PC comments - Wii remote-only games, where the Wii remote is held in your hand with the pointer facing the TV, are great too.

There’s a Pokemon Pinball game on the Pokemon Mini which can be played with just the side C button as well.

I remember that ASCII PS1 one hand controller, built for RPGs. I’d never used one myself, but it’s an option.

I’ve got one of these and I’d ship it if we were closer.

Not action, but one of the greatest games ever made - Tsuukin Hitofude (Polarium Advance) - is one-handed by design. Sadly its reliance on the d-pad means it requires the left hand. Sorry!

Anyway, more usefully, I echo DS and Wii. MaBoShi one button game on both platforms. 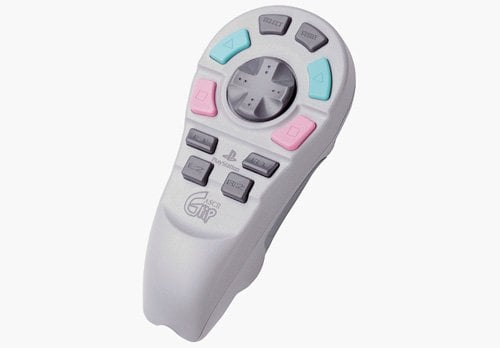 I’m playing the Wii version of Rodea the Sky Soldier right now (Yuji Naka/Prope developed, NiGHTS spiritual successor) that comes with the physical copy of the Wii U release and it’s a fantastic wiimote only action game. Plays great.

On Saturn, Virtua Gun/Stunner with Virtua Cop 1&2, the Mission Stick with Space Harrier (After Burner is conceivable too), and Outrun or SEGA Rally with the Racing Wheel is possible for you with brake and acceleration on the right hand.

Maybe some Arkanoid on NES with the Vaus controller, Life is Strange on a tablet, Hohokum on PS3/4/Vita.

Wishing you a swift recovery.

Sorry to hear this @Peltz

I’m sure you could easily play many shmups one handed if you enabled autofire on a controller and pretend bombs don’t exist.

Thought about this a little more and maybe this would make a fun Hi-Score challenge for RGB to participate in?

Outrun 2 SP on PC can be controlled with only the direction keys with auto gear shift and is quite fun!
Also Bishi Bashi is great fun and no directional input required!

There’s a similar ASCII grip for all PS2, Saturn and SNES. Should keep @Peltz busy and scratch his collecting itch.

Welp, just had my surgery yesterday and, as predicted, my hand/wrist is totally wrecked for a while. So I just grabbed the ASCii one handed PS1 controller for 10 bucks new in box!

The SFC version of the controller isn’t available locally though and wouldn’t ship for about a month so I’m going to skip it (banking on being healed by then). It also costs $45, so I think I’m cool with skipping it based on price too.

Looks like now I need a nice turn based game for PS1 to hold me over. I may pick up Chrono Cross where I left off…

Also going to finally grab the light guns for Saturn and Dreamcast. HotD II is my favorite lightgun game of all time (and I fucking love the horrible English VO) so I’ll finally own the home version of it. So here’s to some 1-handed Sega goodness.

If you have a Wii, House of the Dead 2 & 3 return and Overkill are excellent. Only need a Wii remote!

Thank goodness for the DS and 3DS. So many games can be fully controlled with the stylus. I didn’t realize just how important that was for accessibility until now.

Even Yo-Kai Watch on 3DS which I was currently playing has optional full stylus controls. Now I know why. It’s a shame this type of thing is gone with the Switch now.

I’d be totally without the ability to play handheld games if these stylus controls weren’t invented. I imagine these two systems were tremendous for people who are more permanently physically challenged. Nintendo doing good things as usual.

Which one? Yo-Kai Watch or Mario Vs Donkey Kong: Mini Land Mayham?

My son finished Yo-Kai Watch on the 3DS and he enjoyed it more than Pokémon Let’s Go Pikachu on Switch.

I won’t lie, that surprised me!

He’s now playing the 2nd Yo-Kai Watch game on the 3DS and seems to be loving it as well.

My son finished Yo-Kai Watch on the 3DS and he enjoyed it more than Pokémon Let’s Go Pikachu on Switch.

I won’t lie, that surprised me!

That’s no surprise at all actually. I have both. Yo-Kai is absolutely phenomenal and makes Lets Go look like a joke honestly. Yo-Kai is very creative and charming where as Lets Go is sterile, devoid of style, and lacks interactivity in comparison.

Mario vs. Donkey Kong; Mini Land Mayhem. I got through all the regular levels. I did not go into the extra content at all because I had enough at that point, but I really enjoyed what I played. It’s always introducing interesting little changeups but I also liked that there were alternate ways to finish levels alongside an optimal route.

I’ve been playing Kirby Mass Attack on the DSi XL. That’s another stylus only game that’s a really good time.