Game Boy/Color/Advance OT + Collecting Thread - Get into it!

Finished Jaleco’s Ikari no Yousai/Fortified Zone! It’s somewhat fascinating playing this after its successor Operation Logic Bomb, since the series originated on the Game Boy and you can see the groundwork being laid for that game.

The game’s a top down shooter, and each of the four levels feel almost a bit like Zelda dungeons because of the per-room scrolling layout and the use of keys and light puzzle-solving. The main gimmick is being able to switch between two characters - Masato and Mizuki. Masato has a secondary weapon, Mizuki moves faster and jump over traps.

While it’s certainly fun to play through, you get the impression the game isn’t quite reaching its full potential. There are some cool weapons like the flamethrower, but none of them are really necessary to beat the game, and the enemies and boss fights don’t put up enough of a challenge to compensate for the rather generous health and ammo drops.

The level design develops a lot throughout the course of the game, starting off as empty square rooms and evolving into something more involved. There’s rooms that are pitch black, rooms with moving floors, rooms with devices that reverse your movement controls. But again - nothing particularly challenging when the enemies aren’t posing much of a threat while you’re exploring.

Operation Logic Bomb on SNES addressed all of these issues, but before it Jaleco did release one more Game Boy followup: Ikari no Yousai 2, a Japan-only release. Managed to nab that one off the Japanese eShop, hopefully it’s a more well rounded challenge like its successor!

That’s a wrap for Ikari no Yousai 2! I found it to be much improved over its predecessor. Health pickups are now finite and fixed to a small number of locations throughout each level, rather than as random drops from enemies, and the enemy designs are more fierce and deadly.

The level design picks up straight off the back of Fortified Zone, which is a Very Good Thing. Levels are multi-floored, screen-by-screen scrolling dungeons, and you often have to check the map and test your spatial awareness skills to figure out where you’re meant to head next. There was one obtuse moment where I spent half an hour backtracking through the final level, turns out I was meant to destroy two tiles to the bottom right here:

Wasn’t obvious considering where I thought I was meant to be going, so do keep that in mind if you play it. But I highly recommend it all the same, especially if you’re a fan of its SNES followup, Operation Logic Bomb (I know @DaveLong played through it again a few months ago - check this out if you haven’t

I’m now intrigued by game designer/director Tomoji Omotani’s other works at Jaleco, like Super Ninja-kun. Anyone know if that’s any good? The only Jajamaru game I’ve played is Hamster’s 3DS revival.

It’s so good, still have my original copy from back in the day. Kinda awful cover art.

One reason it has less traction may be no regular Japanese GB release. A colour version was released on a Japanese flashcart service (called a Nintendo Power Cartridge, essentially the GB version of Disk System kiosks). It was also released as a Hello Kitty game on Famicom by Sanrio.

Yeah, I was surprised to find that it skipped Japan originally. I did grab that version of the game off Japanese 3DS VC but I wish I didn’t bother! It’s a disappointing GBC rerelease. Thought the added colour palette detracted from the original visuals which clearly weren’t made for colour, and everything else (world map, save system) felt superfluous.

Been playing some Bomberman GB 3 over the past few days, did one world. I’m really impressed by this game’s design, the levels were compact and to-the-point, each one introducing a new mechanic that’s deftly explored. It looks great, too, even this little capsule redemption screen has button prompt descriptions at the bottom since you can get a description with start or select.

Thought the added colour palette detracted from the original visuals

Like most colourised games. Including Link’s Awakening, the sprites were just not made for colour. Metroid II is about the only exception since it inverted the usual GB design (black background, light sprites).

Still I’d like to get a copy on a GB NP cart sometime as a keepsake!

Just finished Bomberman GB 3 over my lunch, and I had a, ahem, blast with Hudson Soft’s approach to the legendary series on Game Boy. Looking at the credits, game design was handled by Hideyuki Kubota who previously worked for Atlus before joining Hudson Soft in the mid-90’s.

For my money this is one of the best single player Bomberman games, coming close to Custom Battler Bomberman on DS. Its more compact level design and mountain of ideas sidestep the excruciatingly slow pacing that Bomberman was guilty of peddling around the time of GB 3’s release in 1996.

Each world starts off with new enemies and a central hook (the mountains have a slippery icy floor), but after just one level the game quickly starts throwing new objectives and modifiers into the mix. Modifiers include things like autoscrolling levels, death bombs that must not be set off, avalanches to avoid and light switches, while objectives mean the level goal won’t activate unless you, say, unite pairs of similar statues, or guide stronger monsters to gobble up weaker ones.

It keeps the game fresh and for the most part, you rarely know what to expect next. Even its upgrades system switches up any habits you form in the early game. After each boss fight you get capsules to spend on upgrades - including four Motorcycle types which are a bit like the Kangaroos in previous games. My favourite Motorcycle type can destroy soft blocks - but only if you ram into them from afar, and at the cost of not revealing powerups afterward.

All-in-all this is as an essential approach to Bomberman single player as Custom Battler Bomberman on DS. The compact level design keeps things fast and frantic, the difficulty ups considerably once you reach the underground worlds and the game is never afraid to keep challenging you in new and often exciting ways.

Revenge of the Gator is very good indeed. Extremely satisfying working your way up the board, and the theme is a breath of fresh air - like Panel de Pon original designs just appeal more in retrospect than the trappings of Kirby and Pokémon.

I want a cart of it though - as convenient as 3DS VC is it just isn’t as pick up and play, and the game’s visuals probably look even better on the Game Boy Pocket’s display.

Finally found some time and motivation to do the ips v3 retro pixel LCD install. Didn’t have a bracket, allignment is perfectly doable by hand, using the double sided m3 adhesive tape to fix it into place, but I can see a bracket being both easier and quicker. Of course i fudged the speaker polarity when I soldered it into place, second time is the charm. Really happy with the results. The palletes and pixel grid toggle are great features.

Is this the same V3 that HandHeld Legends sells or did you get it from some where else?

edit ohh yeah I see this is a different one than the one I got from HHLegend. Man there are so many options now.

Started Operation C today, after a few attempts I finally made it to stage 4 since the game only gives you one continue.

Loving how it almost feels like a director’s cut of Super-C. How did Konami’s programmers pull this off on the Game Boy? It looks phemomenal, particularly the use of shading, and - on the Contra Collection at least - the action stays fast and fluid throughout.

From a technical standpoint it’s a huge improvement from Castlevania: The Adventure, even if that game was smartly designed around its programming limitations. But so is Operation-C. While you can see, visually, that they had to re-use level layouts and enemies due to a lack of cart space, it never feels repetitive in practice, since the enemy programming and setups are often always unique.

It’s strange though, while Operation-C certainly is the business as a tightly designed game, the two Game Boy Castlevanias are more interesting because their slower gameplay led to level designs and challenges we’d never seen in Castlevania before, whereas Contra GB isn’t breaking new ground. That’s not at all a bad thing, but it doesn’t feel as surprisingly fresh as those games did.

Sharing my recent work on an IPS install and Audio Amp/Clean up on a Gameboy pocket for @GraveyardDuck. I’d never worked on a Gameboy system before and after doing this I totally want one! What a cool little device. The Funnyplaying IPS screen is really awesome. Super impressed with it.

Hey, thanks so much for the support and the opportunity to work on it for you! Here is what the Audio amp integration looks like! After the IPS install I did a recap, bypassed the on-board audio amp to clean up the headphone audio, Replaced the stock speaker, and wired up a PAM 8302A amp. [image] [image] [Gameboy Pocket IPS and Audio Amp]

Loooove the GB Pocket in the original color scheme. Perfect piece to upgrade with these screens. Looks lovely!!

With regular aaa batteries its around 3 hours

Don’t think this was posted yet 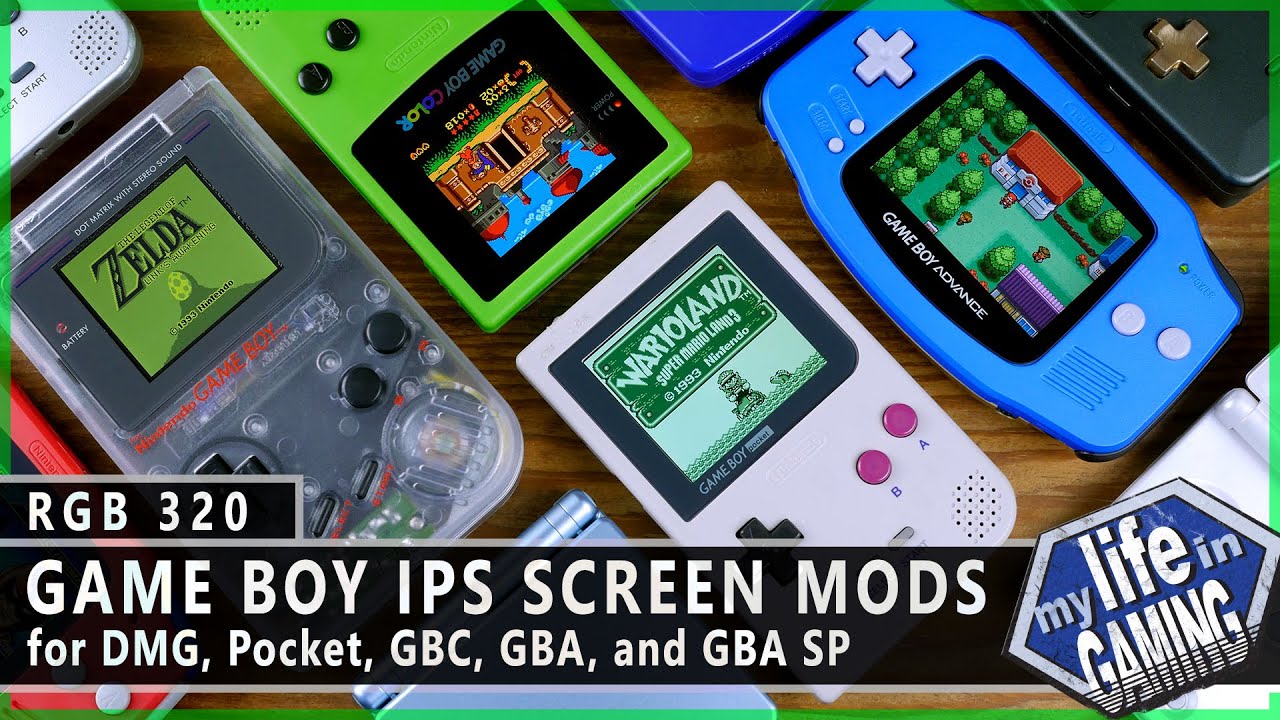 Was really hoping the last game you listed was going to be an “and everdrive”.

Nah, I wanted to limit my choices to make it more nostalgic.

Ah yes, saw this the other week.

I was worried when the video was extolling the virtues of pixel doubling (and tripling) but thankfully it was pointed out the appeal of having the dot matrix.

Would have appreciated some discussion about colour accuracy though - they are wrong to use the AGS-101 as some sort of ‘correct’ baseline!