Untitled-11092×234 329 KB
The GBS 8200/8220 boards have been vastly improved from stock thanks to community mods and software and now in 2020, there are many new features added that allow the GBS to compete with much more expensive and difficult to obtain hardware options. Although I’ve not yet done all the mods I thought I’d share a quick overview of the new features and capabilities that have been introduced by Rama and his GBS Control initiative.

Using the new GBS Control software you’re now able to upscale to 1080p not to mention avoiding the bad stock scaling and handling of 240p:


I believe the 720p/1080p scale options add only 1 frame of lag (lower res modes appear to be lagless). I’ve not setup GBS control myself but I believe these upscale options will place the game image within a more common resolution frame, this might help with those who have TV compatibility issues with the OSSC’s ‘oddball’ res.

GBS Control allows for several deinterlacing options (weave, bob and I think some third option?) have been added that might be worth checking out for those who stream or want to try something other than the bob-deinterlacing of the OSSC or RAD2x/Tink. (I’m not too sure what the third method is and I might be wrong about it being added)

Interestingly this newer video shows much better interlace handling (the third option?). Check out Star Wars EP1 racer and Capcom vs SNK 2 @480i:


Lag I believe hovers around 1-2 frames for deinterlacing but not more than 3 iirc.

I can’t remember if there’s a slight fade out on KI’s attract mode or if that’s the board switching, either way, it seems speedy

Resi 2 on the N64, probably the slowest switch/resync example but still faster than the OSSC

Downsampling has just been added a few days ago, here’s a shot of Rama downscaling Wonderboy at 480p to 240p: 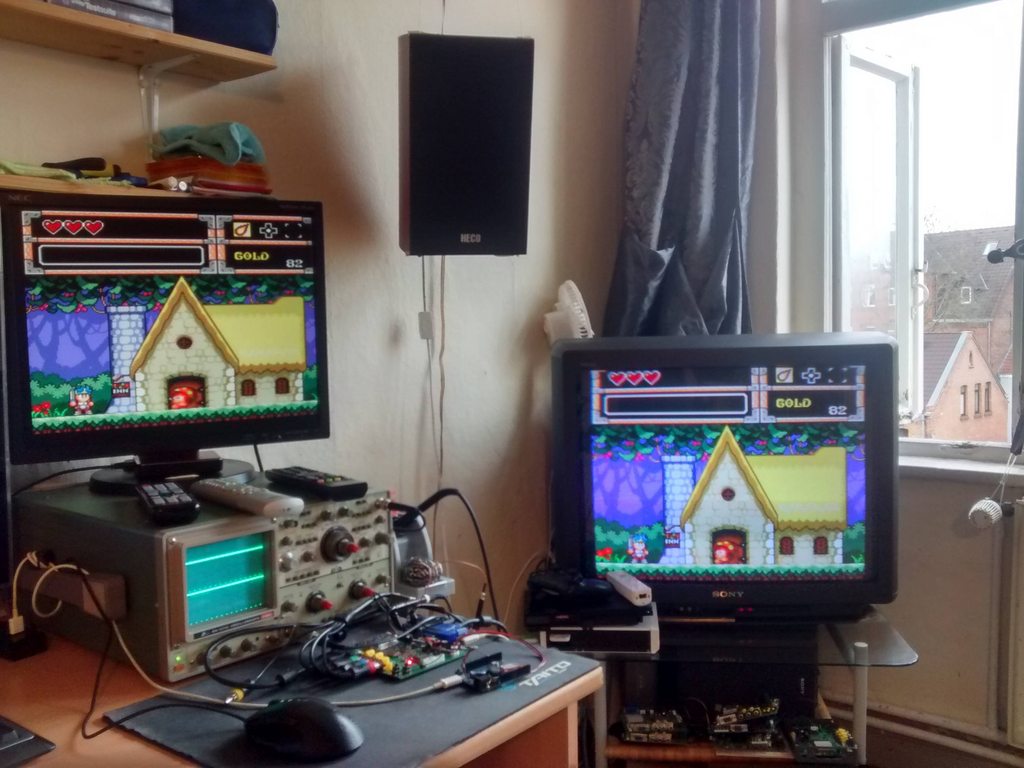 The option is in, go wild!

All that being said getting a GBS setup is a bit of a hassle, although inexpensive ( ̶b̶o̶a̶r̶d̶s̶ ̶u̶s̶e̶d̶ ̶t̶o̶ ̶g̶o̶ ̶f̶o̶r̶ ̶$̶1̶5̶~̶ ̶b̶u̶t̶ ̶c̶a̶n̶ ̶n̶o̶w̶ ̶b̶e̶ ̶h̶a̶d̶ ̶a̶s̶ ̶c̶h̶e̶a̶p̶ ̶a̶s̶ ̶$̶3̶.̶9̶3̶/̶£̶3̶.̶0̶4̶ EDIT: All cheap eBay GBSs gone) they require several mods and some additional add-on boards to get the most out of it. If you’re interested in further reading then check out the mega thread on shmups and of course the GBS Control wiki.

Credit for the Vids: Chris G More GBS vids on his channel.

Super interesting I’d never heard of this. Still looking for a really solid downscaling option better than an emotia for a reasonable price.

Yeah same, finding those type of downscalers in Europe is difficult and pricey. One of the reasons I’m excited about the OSSC Pro.

Not sure how the downscaling is handled on the GBS, whether it’s like the Emotia that averages two lines or other downscalers that kick out every other line.

Thank you for taking the time to write up such an informative post! It looks very interesting, I’ll be keeping a close eye on this for sure.

I couldn’t quite figure out what exactly a GBS is but it seems it’s an affordable scaler with RCA/VGA in and VGA out, right? Just to state the obvious

Yeah, a cheap scaler, I bought one years ago but it was unusable, really poor image quality but things have greatly improved.

Here’s MLiG rightly criticising the stock version back in 2016:

I think I’ve seen Tom post over on shmups, I recognise the text example from his Sinclair QL pic

What’s the latest with this?

I’m going to pick one up.

I saw something recently about fitting an Arduino for web app control panel.

Can I buy one premodded? Or a kit with everything I need? I’m in the UK.

My use would be to get a bunch of different signals to 480p VGA.

I currently use an Extron DVS 304 but it feels like overkill, and I could probably sell it and have some pocket money left over.

Yeah, the ESP8266 is what makes this board viable and lets you control it via a web UI, it’s essential. Latest is there’s an additional clock mod which I believe helps with tearing when upscaling to the higher resolutions, not sure if it’s essential if you’re sticking with 480p though.

I’ve seen one or two pre-modded scalers on eBay but there’s none right now and they were marked up quite a bit iirc.

No kit, unfortunately, you’ll have to source the parts individually. 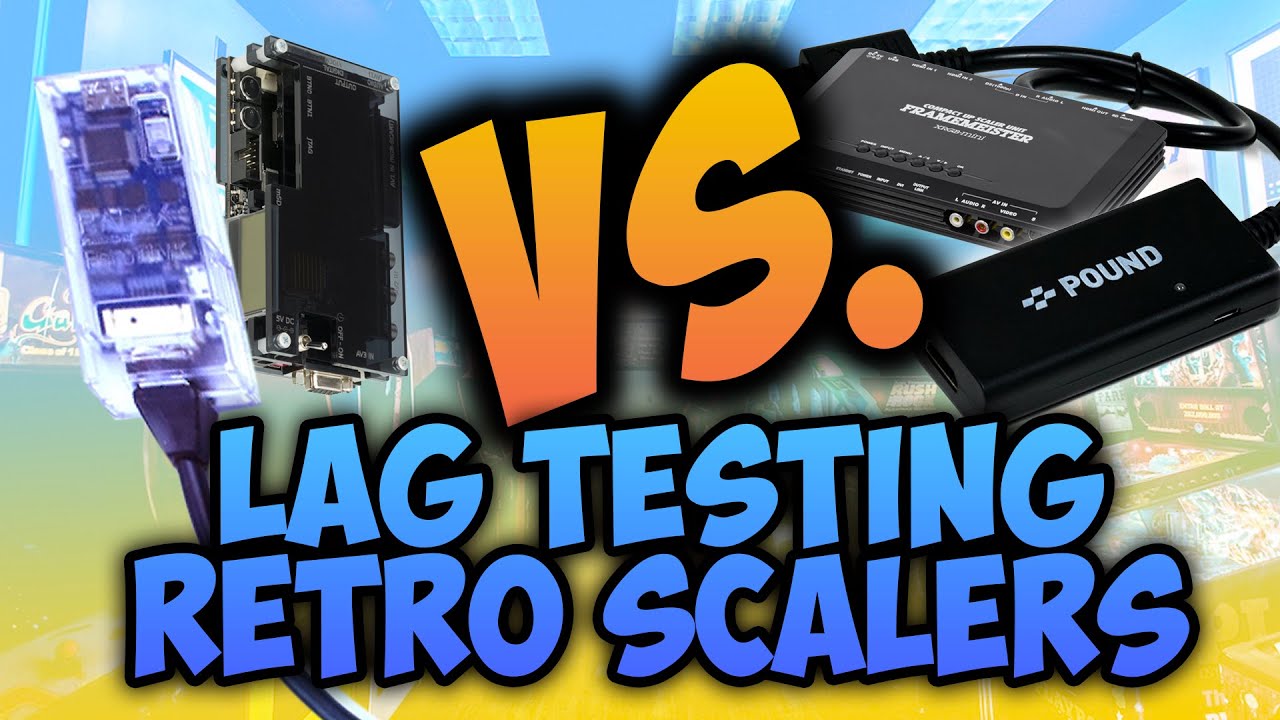 Just ordered one on Amazon UK for £17.99 arriving this week. Let’s see!

Edit: Tracking update shows this was shipped from Germany

Waiting on my ESP.

Meanwhile, I just filed an issue with a proposal (working HTML) for an improved Web GUI for gbs-control.

This wasn't asked for, so no worries if it's off the table. I used Bootstrap to put together an improved Web GUI: works...

Please post your thoughts at that page so we can keep them all in one place. Cheers!

It looks good, hope it gets implemented!

Loving your design for this, it seems like it would be much easier to use on a phone now

My ESP arrived but it may be faulty, as it’s not recognised in Windows or macOS. FFS

In the comments to a video about this, the YouTuber said they’re working on a solderless solution that will be open source. I guess that means some sort of clip on PCB and simple clip on wiring loom?

Worth keeping an eye on.

That’s interesting, I wonder how they’ll pull that off

My replacement ESP arrived and still nothing when connecting to PC. Meanwhile I ordered some Dupont cables to make the install as tidy as possible.

I had previously made sure to use a micro USB cable that does data as well as charging, by checking the cable using my Sony Reader (like a Kindle) which shows a dialog when data USB is connected and charging symbol when power only cable is used.

But, still nothing from either ESP.

So I hunted out another micro usb cable. The most heavy duty I could find. And it now works.

What is the difference between these data-capable micro USB cables I have?

Anyway, almost there with the build!

Cool that you got it working. It seems I got lucky as I just used the one that came with my old Sony phone