Looking for a compact arcade stick that isn't junk

So I recently set up MAME and Launchbox successfully on my PC. Looks and works great, lag feels minimal or nonexistant to me, etc. I have a couple of arcade sticks, these two actually:
HORI Real Arcade Pro. EX-SE
Mad Catz Street Fighter IV FightStick Tournament Edition

One has Seimitsu parts, the other has Sanwa parts – they’re each good for shooters and fighters respectively. The reason I want a third stick is that I think both of these are quite large and heavy for casual play on the couch or a visitor not accustomed to using one. I know these are midsize by enthusiast standards but I’m looking for something with a smaller footprint, reasonably compact/space efficient without being comically small, and still having decent build quality and parts. Major plus if it’s easily moddable down the line.

An initial search led to the HORI Fighting Stick Mini 4 but I’m ruling this one out because it’s probably too small, has undersized parts and cannot easily be modded. Mad Catz FightStick Alpha seems to have build quality problems and some similar modding limitations. The Mayflash F300 Arcade Fight Stick is probably me best bet but I’m open to better recommendations. I picked up one of these Hori Wii sticks years ago and I would prefer not to exceed these dimensions.
https://images-na.ssl-images-amazon.com/images/I/41iDDZg33hL.jpg

I actually think these custom(?) sticks are pretty awesome and finding something like them would be perfect.

I’ve been looking at the Qanba Drone as a smaller arcade stick option. I think it’s moddable but it also is nicely priced when on sale (around $50 or $60). 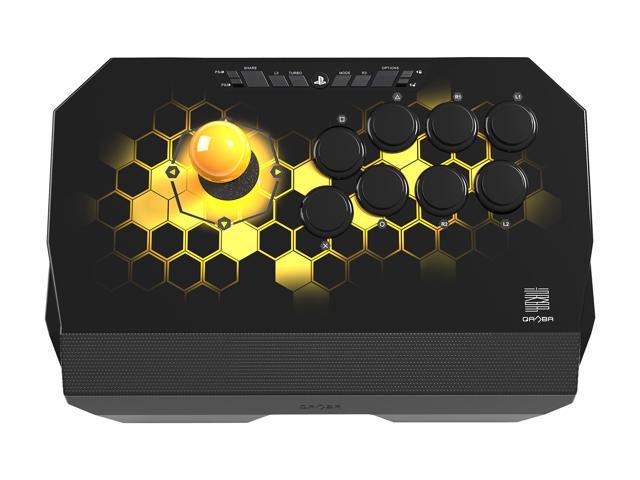 Buy Qanba Drone Joystick for PlayStation 4 and PlayStation 3 and PC with fast shipping and top-rated customer service.Once you know, you Newegg!

I probably sound like a broken record at this point, and I’m not sure if this is small enough to qualify as compact, but I swear, getting a case from Jasen’s Customs is the way to go: http://www.jasenscustoms.com/panzer-fight-stick-3i-whitesandtex

Get a used Madcatz SE stick for x360. Compact and easy as hell to mod.

This was my modded one from years back that I gifted to a friend:

@DaveLong Considered it, but I find the shape to be weird and off-putting, plus not as compact as it could be due to the unnecessary design/shape.

@Chacranajxy I’ve thought about going the custom route. Do you have any other recommended vendors? That Jasen’s site looks solid but has mostly the same size case which is bulkier than what I’m looking for.

@New002 I looked at that one before I even got my two sticks mentioned in the OP, but I ruled it out long ago because it seems to be hit-or-miss, assuming you meant this one:
http://www.instructables.com/id/How-to-fix-a-Madcatz-Arcade-Fightstick-SE-and-Why/
https://www.amazon.com/Xbox-360-Street-Fighter-IV-FightStick/dp/B001M22VCU?th=1

Interesting. All I can say is I never ran into problems with mine, and tons of people at SRK had them. Personally I wouldn’t hesitate to buy another if I were in need of one, but I have too many sticks as is

These guys have a pretty good option: http://arcadeforge.net/Arcade-Sticks/Custom-Wood-Arcade-Fight-Stick-for-PS4-PS3-xbox360-Supergun-Neogeo-or-PC::231.html

The edge of the stick might be a bit sharp, though, due to the plexi extending all the way. It’s smaller, at least.

Edit: actually, might not be that much smaller. Go big or go home, son.

The Hori RAP N is reasonably sized. I plan on picking up one myself, eventually.

Might want to grab one of these for cheap and mod it:

I kinda have already. One of my sticks is a metal tank.

I could bludgeon a grown person with it.

@Peltz That’s a cool-looking little unit, but that reportedly has quality control problems and is failure prone, despite initially launching with a high price tag for a budget mini stick. The 6 buttons instead of 8 is a bit of a minus too (I posted a pic of a 6-button stick as an ideal earlier, but that in regards to the dimensions and build). And I know I’m being nitpicky but it’s also in the same category as the Hori mini of being too small – it can’t sit stable across someone’s lap and will move around while balanced on one leg.

I think the Mad Catz stick that New002 posted or the Mayflash F300 are the best options for an efficiently compact size without major compromises, but I’m hoping someone knows of an option out there that’s a notch above these, maybe something more premium that isn’t huge.

My favorites are the Dreamcast stick, Namco PSX stick, and MD stick. I’ve got dozens of old Atari/Amiga joysticks.

Don’t know if you ever found what you were looking for, but a RAP3 (SA or SE) is what I have and I love it. It is a very good mid-size stick, though not as compact as a F300. That said it’s super solid and a cinch to swap in any parts you want (except maybe Happ type parts). Gotta say though, for the compatibility alone the F300 is one I’ve been wanting myself.

I just recently got the F300 and really like its size and weight. The stick definitely needs replacing (maybe the buttons too) but from what I understand dropping a Sanwa stick in it is ridiculously simple. Its also not too expensive at 60 bucks.

If you want, send me a pic of the inside and I’ll let you know if it’s an easy swap

I actually did end up getting the F300 for Christmas. The size and weight is perfect. I leave the stick out because it barely takes up space and it’s not heavy on the lap after a while like my HRAP. After a firmware update I was able to use it easily with the Switch.

I did read it’s super easy to swap in Sanwa parts but I need to look into if that also applies for Seimitsu since I’m more into shooters and beat em ups. There’s a newer F100, slightly more compact and $20 less than the F300, but there’s little available information on it and a single (negative) review on Amazon said it’s not an easy mod.

Sanwa isn’t as good for shooters and beat em ups? That’s news to me.

Back when I was big into arcade sticks I always heard seimitsu was preferred for shooters. Not sure about best em ups but that would make sense.

I think that had to do with the cabinets in Japan typically having the Seimetsu parts for shooters and beat em ups. It was a weird quirk of the arcades there that stuck with enthusiasts.

This is an odd question but since I have sleeping children when I game. Are there the equivalent to silent switches like mechanical keyboards have now? My PC gaming has taken a dive since we got kid # 2 because of the loudness of the keyboard (which is adjacent to her room). And I haven’t used my fight sticks in years for the same reason.

Heard this a lot when I was modding my stick, that’s why I got a LS-56 to try. It was okay, a little stiffer and the throw was a bit shorter, which I was looking for. After modding with a heavier spring and octo-gate it was better, but in comparison to a JLF it still felt a little ‘gritty’. I used the lithium grease after the mod too.

In the end I modded the JLF to match (short-throw mod, a 4lb. spring, and an octo-gate), and it was simply better. If you want to keep things stock I suppose Sem may be better but for my money I think a JLF is the best you can get since you can mod it so easily to fit your needs.

Also @Kawika, Sanwa does have silenced buttons, but I haven’t tried them myself.

Playing until 2am while allowing your family members a good night's sleep was nearly impossible until now. Sanwa's all-new "silent" pushbutton - the OBSFS - dramatically reduces the sound of your command inputs, allowing you to play confidently while...