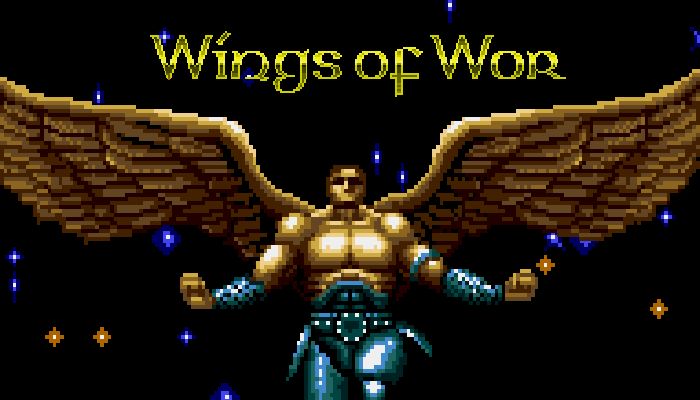 I’ve updated the website with the new game, let’s get to defending the heavens!

Also known as Gynoug in Europe.

I’ve never played this once, but it looks interesting!

Go into the options and select NORMAL DIFFICULTY

I only have the difficulty options of easy, normal, hard and very hard on Gynoug so assuming Normal is the correct choice and no continues.

Gynoug defaults to easy for some reason.

Anyway, not played this in many years and gave it a quick go and got to just past the mid boss of Stage 3:

Weird having the HI-SCORE displaying only in the options screen after the game over.

Ok this game is tough haha

Oh man this game is beautiful on a CRT. First run with CRT goodnesss, I got to the stage 3 boss.

Gynoug defaults to easy for some reason.

Yeah, U.S. version of Wings of Wor does too. If you want a version that defaults to Normal, the Japanese one is your ticket.

Only own the PAL version but has no optimization so good in 60hz.

There is a hidden 1up in each stage that you have to fire into its hiding spot to uncover it.
Off hand I only recall where it is on the first two stages.

Will give it a few more plays later this evening.

Yeah I found the one on stage 1, but that’s it

The one in Stage 2 is just after the mid boss and right at the bottom of the screen.
It is very easy to miss for sure:

For the Stage 3 boss his dust particles he blows out are rather difficult to dodge. It is kind of weird has the first few waves of them that he blows out seem to do no damage to you but then they start killing you.

Died shortly after the stage 3 midboss. Very cool shmup, I’ve not played it before. It feels like a combination of Legendary Wings and Lords of Thunder.

Ok, made it to stage 4 this time. Stage 4 is like the high speed stage of Gradius. There were at least 2 1ups that I saw, but I was too slow to get them.

Last one for the night. I really dig this game.

I played this for the first time tonight. Thanks for using this game. I didn’t know it existed. I’m not a huge shooter fan, but I have been trying to get into the genre more the past couple years.

Someone has to set the bottom score, right?! Lol

Hey, that’s about how I did on my first attempt lol

Just in case there are any of us that do not know where the Stage 1 hidden 1up is:

There is also a hidden “S” shield weapon in stage 1 at the bottom of the screen where those red worm like creatures pop up and down:

I still can not find any hidden items on Stage 3 though.
Stage 4 does indeed have 2 hidden 1up’s that I know about and loads of hidden items.

The boss of stage 3 is still killing me way too often and yet to beat stage 4 but joining @GraveyardDuck in now scoring over 007xxxxx:

I can now seem to get to the Stage 3 Boss more often than not without any deaths and collecting the 2 hidden 1ups + the extra 2 lives from score for a total of 6 lives:

But this boss is still plaguing me. Wild fire doesn’t seem very effective against him so in future I am dumping that weapon I think when I get to him:

But everything goes to pot after that sadly. Getting the two extra lives in Stage 4 isn’t too difficult if you race forward for them and have enough speed power ups already but losing the ground weapon makes the second half of this level become rather difficult.

How are people utilizing the weapon drops?

Stage 1: EEE (use EEE immediately) SS.
Stage 2: T (Use SS on mid boss) T T (use TTT immediately) S (Use S on end boss second phase).
Stage 3: Pretty much just get Wild Fire.
Stage 4: GGG and try to save it for the second half of the stage after the mid boss.

I’ve been using E a lot at bosses simply because it cancels most bullets at 45 degree angles up and down, so I can consistently focus on the weak spots. I found that using the shield on the first boss allows you to simply stand on top of him until he dies, but it drains your shield super fast.

I am finding that if you push yourself right up to the face on of the stage 1 train boss you can often kill him before he gets a shot off.

The first face of the stage 2 ship boss again can be very close to killed by again hugging its face until it opens its mouth. Which leaves you with 10 seconds of shield to face hug the second phase face under the ship which isn’t quite enough time to destroy it, so I hug its face until it starts to fire, then pull back and keep firing while dodging bullets and as soon as I feel in any danger I use the shield and go right up to the face and hopefully kill it within the 10 seconds.

Still not figured out a good way to kill the stage 3 boss.

Yeah and the stage 3 boss has a weird hit box. Oddly enough I do better against him with the default shot because I almost always die from getting hit by the debris that flies out of him.

I found the Hidden 1up on Stage 3 finally!

It is after the first 3 sets of perched Gargoyles hidden behind the last pillar before the 4th set of Gargoyles:

Ooh that’s a tricky one, good find! I’ll aim for that on tonight’s session. I feel like once these 1ups can be obtained regularly it’s really gonna shoot these scores way up.