The Ripping Thread - How to build your own legit retro ROM library.

You have the BennVenn’s NES cart dumper that looks like it’s much more plug-and-play than the INL Dumper. Epilogue (the ones with the GB Operator) have said they are planning to make a NES dumper as well.

That thing sounds awesome. I wonder why he only made eight of them. I’d love to snag one and try it out. Seems like it would work just fine with a converter for Fami carts. That said it looks like in the comments he didn’t have full mapper support for it yet but would do more on request.

It creates a digital ROM file from your physical cartridge. For preservation and to stay legal.

It can probably also read/write your save games to/from cartridge.

It’s a device that basically allows you to do the same thing as ripping your own CDs with a disc drive, but with ROMs from a cart. Some people just download a copy, others prefer to back up what they already own. Technically the latter is legal and the former isn’t unless you’re buying it off an online store.

But I don’t think most companies care these days outside Nintendo.

here I can collect and store the NES ROMs

for this you want an “Everdrive”-type device.

(provided a NES/Famicom adapter becomes available for it).

It seems like this will ship from Japan? Could be expensive.

£117 plus shipping from Japan Review of the above device 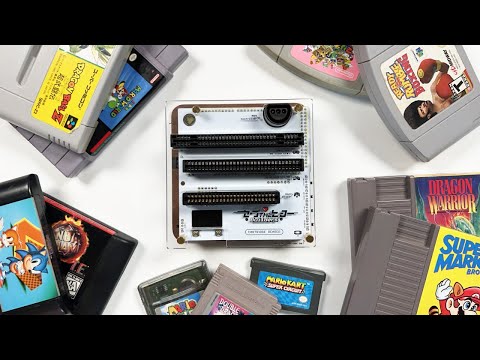 Just ordered one of these myself. One of the most exciting features is that it seems to support about every NES/Fami mapper ever.

The 3-in-1 namco on steam is extractable using https://github.com/farmerbb/RED-Project/wiki/Arcade-Game-Series

Anyone know if it’s possible to get ROMs out of the capcom arcade on steam? The Free interface comes with 1943, but I don’t see anything obvious about where it is, even after unpacking some stuff.

Doing that I get a ton files, nothing looks like it’s good for mame. Bit of a needle in a haystack game at this point. Saw a message in a steam forum about capcom “locking out” ROMs. Not sure what that actually means https://steamcommunity.com/app/1515950/discussions/0/3079880882844639976/ This appears to be after the reddit about unpacking

edit: There are instructions at https://retropie.org.uk/forum/topic/10918/where-to-legally-acquire-content-to-play-on-retropie/241?_=1654176297908 with some additional comments about how to do it after the “update”. Still unclear on where 1943 is… unless its the two pak.patch things (one English, one Japanese). Seems no one has actually done this yet in its current state

As far as I remember 1943 is in the exe file.
it is extractable in the older version.

Ok, So I tried getting a DLC to work. Best I can tell, the unpaker someone made doesn’t work right anymore.

Any chance The Capcom Fighting Collection is extractable?