Well, this looks great, a 60fps camera is used to solve the issue of using a light gun on flat screens. Nice to see the Wii/Sensor bar lag issue being mentioned and they even tested it out on Point Blank which would be terrible to play with reticule lag more so than other light gun games. It’s a PC only solution but they test out console games via emulation which works fine. I was worried when I saw the V1 gun but the V2 has a Namco G-Con 45 vibe!

Kickstart mentions recoil is being looked at too. The white border the camera uses to track the screen can be adjusted, with colour and size options.

More than playing old games emulated, I hope the technology will be used to make new games on consoles or computers. Accelerometers-based “lightguns” are a joke.

Oh now I’m imagining what a potential new lightgun game could look like based on current gen graphics!

Sadly, I think it’s a bit of a dead genre but I would love it if we got a lightgun renaissance with a new gun from someone like Namco or Sega kicking things off.

These guns need to be hooked up to the video feed and given an idea of the shooting space they have to work with. If they can be designed to be fully compatible on all systems, then I’d like to see the whole thing really take off.

The genre has moved almost exclusively to VR.

Then the topic’s over for me. * Shrug

That’s a good point, I’m yet to own a VR setup so I keep forgetting that there are lightgun style games on there. I think that’s where the genre will probably evolve a bit more (or has already?). That being said this thing can track your position and rotation (I think) so you could end up with perfecting something like Konami’s Police 24/7’s leaning mechanic without the need for a camera and no reason it can’t be used in VR if it has a form of tracking.

@Voltz He said he wants to connect the gun to “original hardware” and there was someone asking about ps3 and ps2 in the comments which he replied saying that he’s looking into it. This would be great for futureproofing these classic games and keeping them playable when they’re stuck on CRT tech. No idea how he’ll be able to do that though, a closed console environment I imagine is a lot harder to get something like this going.

Ultimately these games will always just be on rails, so the replay is sort of limited. (Even games like Starfox and Panzer Dragoon give you the agency to move around within the ‘tunnel’ you’re travelling down.) You could dynamically spawn the targets and add branching paths, but this isn’t enough to justify the development IMO, especially when playing on a traditional 2D display. VR obviously adds to the immersion, and exponentially increases the depth of the gameplay by natively allowing for targets to completely surround the player and making it easy and intuitive to “follow” the action.

They are still fun, but outside of VR and/or amusement machines, I don’t see many developers taking up the mantle to revisit the genre, unfortunately.

Lightgun games are by definition arcade games, so of course the replayability will be limited if you don’t care about the score or cheese your way to the end with unlimited continues.

Arcade games are niche games, and as such won’t be multi million seller. Like other niche games, they just need to cater to their audience.

The genre died with the CRTs, right in the early 2000s. There were a few on the PS2 but afterwards LCDs meant it was impossible to make them. There was a small revival on the Wii then the PS3 thanks to their motion controllers, but enthusiasts knew motion can’t replace direct aiming, and the genre died again. If there is a technology to make new lightgun games, and that is easily usable on consoles (without expensive hardware), I can’t think of anything that could hold a revival of the genre. People like to shoot at things on their screen.

Now working with consoles…Although I think through composite only? I’ve seen in the comments they’re looking at making it work with component video, hopefully, they’ll add SCART support too. He said an Xbox demo vid will be shown soon and he’s working on G-Con 2 and 3 support!
KC-Slater June 10, 2019, 2:51pm #11 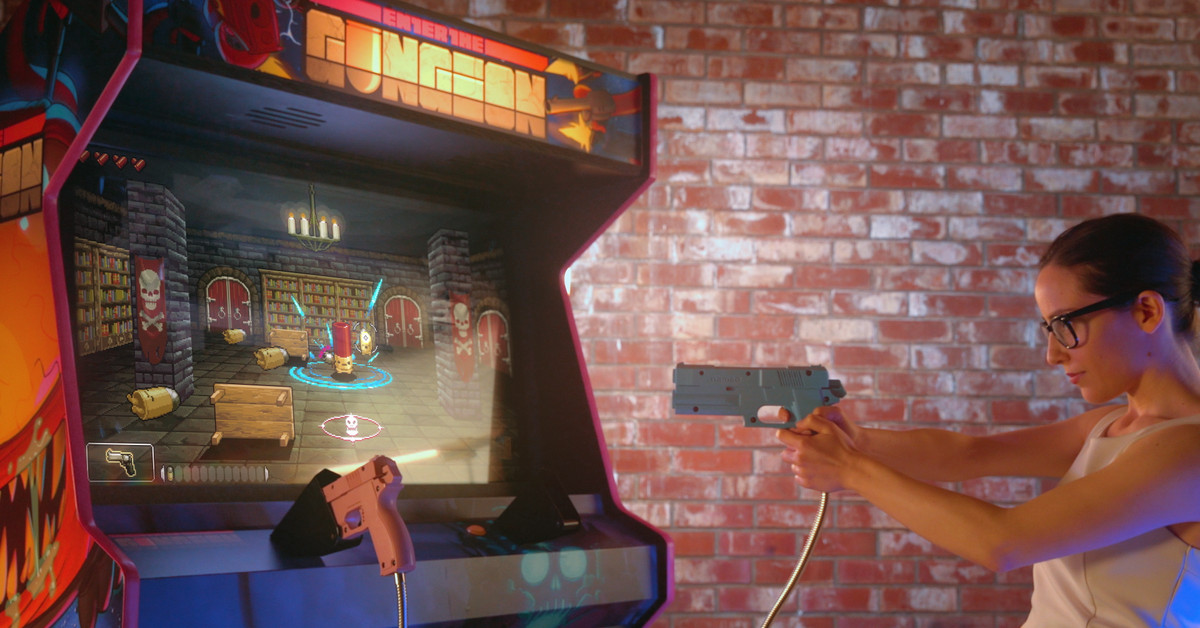 It’s called Enter the Gungeon: House of the Gundead