Yeah, I’m going to get that too. I think the sale ends on the 13th for anyone interested. The Darius Cozmic Collections as well as Dariusburst are included as well.

I own G-Darius on PS1, but this updated version sounds great.

Wow, that’s a blast from the past! Haven’t played Solar Striker in ages. The last time was three decades ago on my OG Gameboy!

I’ve never been able to complete it. Perhaps I should try it again sometime.

Nice! Your post reminded me that I have a loose copy of this game which someone gifted to me several years ago and I still haven’t tried it:

I actually prefer it to the Japanese one in this case: 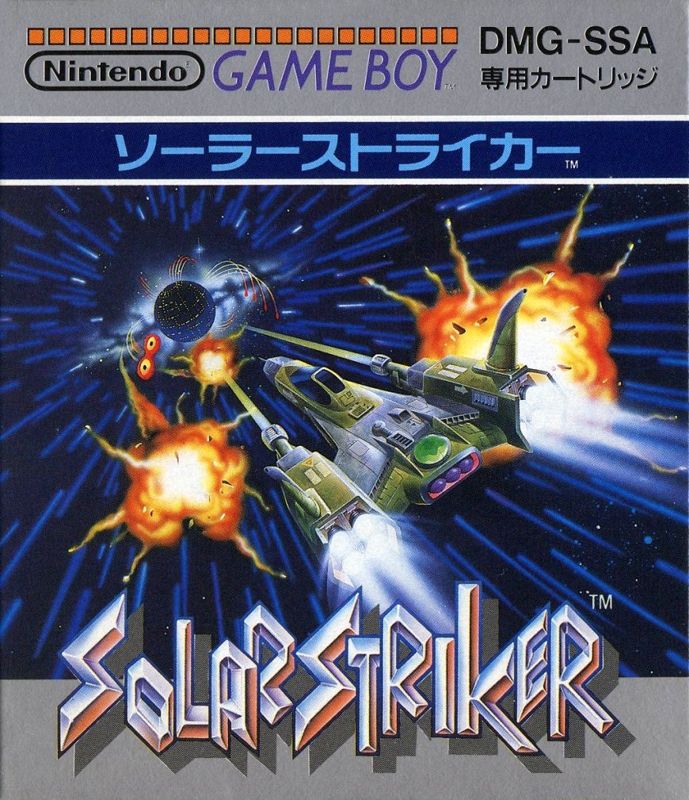 Both look really cool though.

I’ve always loved Salamander/Lifeforce. Played them religiously on the Commodore 64 (pretty good conversions too) and will often take the Saturn version for a spin when I’m in a SHMUP mood. But can be very brutal in the wrong spots.

Played quite a few shoot 'em ups this weekend!

I’m actually more of a beat 'em up guy, but the past couple of days I had a craving for some shooting action.

The Astro City V port of Batrider will feature several new tracks composed by Manabu Namiki as some songs from the PCB could not be used due to copyright issues:

@shmups
Manabu Namiki's claimed some songs in Armed Police Batrider can't be used in the Astro City Mini V release of the game due to copyright issues, so he's creating new music for the game to replace it with. Sample: https://t.co/3oxVhMHmP8
4 Likes
AgentUnknown April 18, 2022, 5:34am #1635

Someone posted this video of Layer Section (apparently the Steam version) with audio dropping glitches. Someone from City Connection replied that they’re working on this and that they’re still working on resolving Cotton’s input lag issues. This company really needs to get it’s act together:

@iconoclast575
{🏆WR News🏆} City Connection has outdone themselves, having just released a worse port than anyone could have expected. They've brought the high input lag they're known for, but this time they've included broken audio! Congratulations!🎉 https://t.co/TOERgKAjWj
1 Like
akumagorath April 30, 2022, 6:36pm #1637

I don’t even know why they’re even attempting this unplayable Saturn emulation. nobody seems to be enjoying it

So I downloaded the Switch demo for Layer Section, the input lag isn’t too bad so far but it’s definitely noticeable (please bear in mind I’m not great at noticing input lag levels, usually it has to be really bad like Mega Man Legacy Collection). There is only one scanline option but it’s a nice, even effect for what it is. I didn’t experience any audio glitches like that post above but the demo only features the first area and boss.

Here are a few complaints which will keep me from buying this: I play shmups on my Switch in TATE mode whenever I can. So after playing it briefly in TV mode I set up my Hori stand. I tried using my left joy con in “NES” orientation which I prefer when playing shmups in TATE/tabletop mode, the game won’t let you do that, you have to either both your Joycons in dual mode or use a Pro Controller. I also have a Flip Grip but it’d be nice to have full controller options when choosing table top mode.

Now the worst part in regards to this. The game’s screen display menu only has two display options, “Normal” or “Large.” Normal is far too small for TATE obviously so I changed to “Large” and the display is still far too small and takes up the very center of the screen. Most other vertical arcade shmup ports on Switch which offer TATE (for example Livewire’s Cave ports or Hamster’s many vertical arcade titles) will also allow you to adjust and expand the vertical/horizontal size percentage to be much bigger when the screen is flipped while still maintaining the games proper aspect without stretching it (this still means you get some black bars on the top and bottom but that can’t be helped due to the Switch’s 16:9 ratio and at least with the aforementioned additional display settings you can still get a lot more viewing real estate which is really nice and the entire point of TATE to begin with). Meanwhile, this is what you get from City Connection, the “Large” display option in TATE mode:

So……what is the point of bothering to play this game outside of TV mode? Unless there are extra display customization options in the “Extra Option” menu? But that menu isn’t available in the demo so no idea unless someone who owns the full game can confirm.

Seen peeps say you have to set the game mode to arcade, you are still in consumer.

City Connection comprises of three or four seperate teams spread throughout the country, I don’t believe the ex ZeroDiv guys had anything to do with the Deathsmiles port.

I don’t even know why they’re even attempting this unplayable Saturn emulation. nobody seems to be enjoying it

Becuase slapping an ISO into an emulator and creating a frontend is a hell of a lot cheaper and easier then porting.

Thanks, I adjusted it to arcade and now TATE looks proper:

Has anyone here run into the audio glitch on the Switch version? Even though I have it on Saturn I might actually get it now since it’s on sale just to have a copy to play when I’m traveling.

the ZeroDiv logo shows during the opening credits of Deathsmiles. they also have a history of poor, laggy ports

I think the reason they didn’t botch that one is because it’s basically a 1:1 port of the Xbox 360 port

Looked it up as I was sure that the Zerodiv team that put together the Psikyo ports weren’t responsible for Deathsmiles and they aren’t, it’s a different set of developers under the name of ‘TAKExOFF’.

Was thinking of picking up Fighting Hawk which was released on ACA last week. Any opinions here on it? I’ve read conflicting info regarding whether or not it was developed by Toaplan and distributed by Taito or simply a Toaplan’esque shooter made by Taito.

Looked up some info about the game, and most signs seem to point to it being a Taito in-house production.

Haven’t played it myself, though. Seems pretty decent.

I downloaded Fighting Hawk a few days ago. I had over 400 gold coins sitting in my Nintendo eShop account so I picked it up for a little over $4 and am I ever glad I resisted the urge to pay full price because it’s really not very good from what I’ve played so far. Your fighter is sluggish, underpowered and a magnet for the bullets coupled with lots of cheap enemy formations often coming up from behind. Maybe I’m missing something here but this game just feels like a rather generic quarter muncher. Wish I’d watched a few videos before getting it.